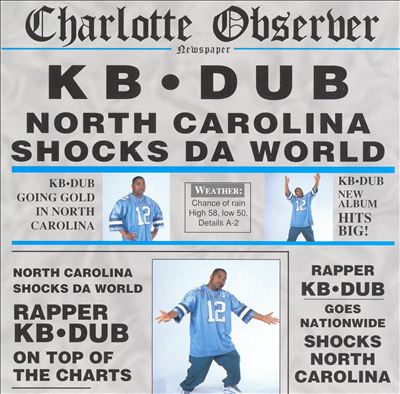 The whole idea of ‘representing’ in rap music harks back to the early days when MC’s moved crowds by asking them where they were from: “Is Brooklyn in the house? Is the Bronx in the house?” New York rappers would ask and Brooklyn or Bronx residents would make their presence known. Later on, when hip-hop travelled north, south, west and even east from the five burroughs, it came time for other neighborhoods to represent. Places like Compton and South Central L.A., Houston’s 5th Ward, New Orleans’ 3rd Ward or Hunters Point in San Francisco were put on the map by various rappers. With the national attention focusing on the areas of New York/New Jersey, Los Angeles, Atlanta and a few others for years, other places where hip-hop was poppin’ became increasingly eager to get put on the map. In the case of the State of North Carolina I didn’t really notice anybody trying until Petey Pablo instructed his homestate and subsequently the whole United States to “take your shirt off, twist it round your hand, spin it like a helicopter” in “Raise Up” – surely a custom locals had been practicing before Petey Pablo made it popular all across the map.

“Raise Up” had the clear purpose of putting North Carolina on the hip-hop map, and with a little help from Virginia’s Timbaland Petey Pablo succeeded in his mission. The funny thing is that some years prior to that a N.C. rapper named KB-Dub made a similar attempt by naming his album “North Carolina Shocks The World” and designing the album’s cover like a “Charlotte Observer’ frontpage with headlines like ‘Rapper KB-Dub Goes Nationwide’, ‘Rapper KB-Dub On Top Of The Charts’ and ‘North Carolina Shocks Da World’. Wishful thinking apparently didn’t do the trick here. Or do you remember KB-Dub?

Getting to KB-Dub in just a minute, let me quote the introduction to the www.ncbookstore.com music section:

‘North Carolina’s musical heritage starts in the hollows of the Blue Ridge Mountains, where a balladeering tradition, wedded to lively fiddling and banjo picking, helped give birth to country music. It continues through the mill towns of the Piedmont, where street musicians of the 1920s and ’30s created a unique brand of the blues that continues to influence artists today. It takes in the modern urban and college scenes, where both traditional and alternative music performers can win appreciative audiences and, sometimes, earn national prominence.’

The question now is why KB-Dub failed to gain such prominence. That’s an easy one. Because his music is hard to endure. It’s not so much his own performance but the lifeless beats he has to rap to. The most animated rapper couldn’t breathe life into these tracks. It’s just not music that will grab people’s attention but the type of hip-hop that both a core and a crossover audience will instantly recognize as sub-par. Music that lacks any positive attribute, no matter what you’re looking for. It’s not hard, it’s not catchy, it’s not subtle, it’s not refined, it’s not funky, it’s nothing. These are some of the ingredients to a successful rap song and “North Carolina Shocks The World” is totally devoid of them.

Even though “Raise Up” is not trademark Timbaland, the name recognition worked well. I think it’s fair to say that Petey Pablo wouldn’t be where he is right now without this affiliation. However, it takes both. Hot track plus charismatic rapper equals hit. I don’t see any of the tracks presented on “North Carolina Shocks The World” even becoming local hits. A ‘hit’ is short for ‘hit song’ and you can barely call these cuts ‘songs’. That doesn’t stop him from saying he’ll outsell Michael Jackson… False assessments like these detract from the fact that KB-Dub isn’t stupid. He raps with a laid-back flow in a young voice that’s quite pleasant to listen to. Lyrically though it’s all too basic. The track titles alone are enough to know he will fail to distinguish himself from every other rapper that was playing the ’96/’97 season: “Player Haters”, “Do U Wanna Ride”, “Keep It Real”… And like many of these young players he lacks the proper perspective, when he claims: “Like Jordan on the court, nigga, I’m hell on a rhyme.” That’s as far fetched as those imaginary headlines he wrote for himself.

But I acknowledge his effort to promote standards that others of his ilk don’t give a damn about. In “Kid Wit Clout” he wants to “show niggas what hip-hop is all about,” defining himself as a “real MC”:

“In my room spittin’ hits, niggas couldn’t see
I was stingin’ like a bee when Muhammad Ali
was puttin’ niggas to rest, yo check it, shorty hop
what I’m tryin’ to say is I’ma blow up your fuckin’ spot
Yo, give the mic to a real MC
(Yo, what’s the definitoin of real?) Yo, look it up, it’s KB
I heard a lot of niggas try to rhyme before my time
and said to myself: Yo, this nigga’ shit don’t even shine
because the line they said just a minute ago
word life, I was kickin’ back in ’84
It’s ’96 now, yo tell me, ain’t he far behind?
I’m years ahead with mine, poisonous like swine”

I guess KB-Dub is proof that you can be a ‘real MC’ and still lack pretty much everything a real ‘real MC’ should have to offer. I mean if you’ve been rapping since 1984 and have only gotten this far in over ten years, there’s no reason to pat yourself on the back like that. But he gets props for addressing the needs – or rather wants – of his North Kakalaka neighbors without giving in to the thug rapper image too much. The biggest surprise as far as avoiding stereotypes is “Always On My Mind”. The starting point for this song is BIG’s “Should be having my baby” line (from “Big Poppa”):

“I’m not a father yet but got the capabilities
cause if something is mine I got crazy responsabilities
So just imagine if you were mine, yo, we both can shine
loungin’ in jaccuzzis, bitin’ steaks baby, and sippin’ wine
livin’ the life a lot of couples be dreamin’ of havin’
I hope you’re jockin’, cause baby, I be monogamous
I swear to God it’s true, boo, you for me, me for you
Could swing the whole nine, know what I mean, until we say ‘I do’
As for kids, I always said that I would stop at 2
but if it’s with you I might change it and stop at 22″

You don’t hear words like these too often on a rap record. Unfortunatley, on a whole he’s not nearly as original as he makes himself out to be on the closing “Carolina Style”. Despite touching on the Goodie Mob’s “Dirty South” in one song, KB-Dub doesn’t sound neither dirty nor southern. In fact, some more local flavor like they display in the “Outro” (where he just freestyles to some studio musician’s drumming), would have been beneficial to his mission to ‘shock the world’ from out of North Carolina. But he sure got that right: “Since my state ain’t on the map I’m representin’ one time.” He gets an A for effort.