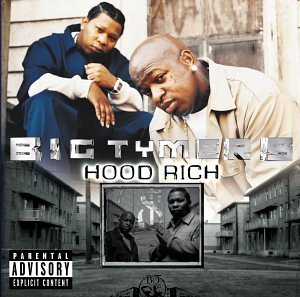 Back for the third time after the success of their debut album “How You Luv That” and 2000’s “I Got That Work,” Big Tymers aim to set a new standard of flossin on “Hood Rich.” If you’re wondering what it means to be “Hood Rich” as opposed to just plain RICH, Mannie Fresh offers the perfect explanation in the chorus to the first single “Still Fly”:

“Gator boots, with the pimped out Gucci suits
Ain’t got no job, but I stay sharp
Can’t pay my rent, cause all my money’s spent
But that’s okay, cause I’m Still Fly
Got a quarter tank of gas, in my new E class
Cause that’s alright, cause I’m gon’ ride
Got everythang – in my momma name
But I’m Hood Rich – dadah-dadah..”

For budding economists, this model of conspicuous consumption taken to the extreme could happily keep the US GDP growing at 5% a year. For everybody else, it’s a love/hate relationship: you’ll either love hearing them talk big spending or hate them for espousing a set of values that even they confess is irresponsible. After all, what kind of rich is it to drive an eighty thousand dollar car if you have to keep it in your momma’s name?

Regardless of whether you’re a player or a hater, the Big Tymers always have been and continue to be a pleasure best not enjoyed cerebrally. Their music is for cruising, not mental bruising. As much as people complain about the banality of Hollywood movies, it’s always the films with larger than life action that draw big box office, no matter how shallow the plot or the characters. “Hood Rich” is that movie for your musical mind that never takes itself too seriously, and draws you in for the fun. The key is the impeccable beats of Mannie Fresh. Good directors can make entertaining movies out of weak scripts with the right technique, and Fresh makes ghetto gold out of sex, drugs and money with his fly production.

If you’re not already familiar with Fresh’s tight bass bottoms, crispy percussion, and melodic mastering, get a late pass — but seriously, this album would be the perfect introduction. Try as hard as you want and you’ll still be stuck looking for a weakness to the Big Tymers sound, from the catchy bounce of “Oh Yeah!” at the start to the old school influenced BUMP of “My People” at the end. On the rare occasions where Fresh isn’t behind the boards, guest producer Jazze Pha keeps things sharper than a samurai sword on the smoothed out “Sunny Day” and the hardcore anthem “I’m Comin'”, and even provides guest vocals on that track as well as on “Get High.” WhatCAN’T the man do?

Speaking of cameo appearances you’ll find Trick Daddy on “Da Man” and Boo & Gotti on “Oh Yeah!” For the most part though the lyrical weight is carried by Baby and Mannie, which has always been the Big Tymers strength and curse. Don’t even bother trying to count the number of simplistic rhymes you’ll hear used over and over: “stunna” and “Hummer”, “spot” and “hot”, “South” and “mouth”, “hog” and “dog” and so on and so on. Pay too much attention to the lyrics and you’ll end up feeling like Dr. Seuss was a better MC. Do they care? HELL NO. Listening to this album for the rhymes would be like eating a cheeseburger and expecting gourmet grade A steak. The Big Tymers keep it simple for one very good reason: it’s all about the mood and the music. For that reason a lot of cerebral albums will fly high and fall flat, but for the sheer entertainment value of your dollar the Big Tymers are where it’s at.