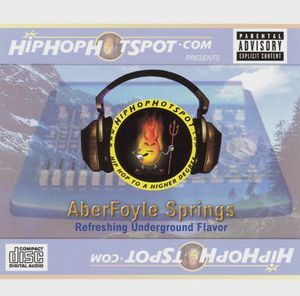 Before I really get into this review, let me just get right to the point. If you are a fan of original, excellently skilled MCs and amazingly strong, neck-breaking beats (and if you’re not, what the hell are you doing at rapreviews.com?), then fuck reading this review and just head over to HipHopHotSpot.com RIGHT NOW and buy your copy of the Aberfoyle Springs Compilation. Seriously. Hell, buy two copies, because this is desert island bullshit. As in, if you could only take one record with you to a desert island, this is that record. It’s a perfect 10. There. I saved you from scrolling to the bottom of the page to peep the final verdict. Let’s be honest with each other here. There is no excuse for not owning this CD.

So what makes the Ab Springs Compie so strong? Well, kid, where would you like me to start? First, let me ask you what you’d like to find in a hip-hop album. Chances are, you’d like to hear some lyrical dopeness, and some music to nod your head to, right? Well then, this album more than fits that bill. But I don’t wanna sound redundant. Let me explain.

The Compilation, in general, is a notoriously difficult thing to pull off successfully. Especially when it’s a rap compilation. There are just too many problems to fall victim to. You either get a CD with two or three solid tracks with the rest serving as filler, or you get a collection of songs that’s so hugely eclectic that it couldn’t all possibly appeal to any one person. Well somehow, the cats at HipHopHotSpot.com have managed to avoid both of those pitfalls. Each and every track is fucking CRAZY, and the artists’ sounds, while varied, still don’t stray too far from each other to come off sounding disjointed. What I’m trying to say is, the whole thing flows very, very nicely. These tracks work well together, but still remain completely unique from one another. It’s a rare achievement to have tunes that blend this well on one album (even in cases when all the tracks are by the same artist!), and whoever was in charge of putting this joint together has quite an ear for rap music, I can tell you that.

Now, HipHopHotSpot.com obviously strapped on some miners’ hats and grabbed some pickaxes for this release, because they’ve essentially tapped every corner of the underground here. And believe me, the great moments on this album are too numerous to try and mention in one review. For starters, Rok 1 delivers some of the funniest fucking one-liners I think I have ever heard on “Clear the Building.” This one will have you laughing, no question. “Fallout” by Dutchmassive (featuring Celph Titled and Walkmen) is on a VERY nice Pharcyde-sounding tip. Mars Ill drops the remix of “Rap Fans” and Sev Statik will absolutely TEAR your headphones to SHREDS with “Can’t Come Off”. I still can’t get over how good that track is right there. “Integrity” by Anonymous Twist is the definition of an over-all solid rap track and “The Evolution” by Rugged T’Reign is equally impressive. And we’re only up to track eight! Did I mention the record spans 22 tracks? You’ve got 80 minutes of A++ hip-hop with Ab Springs! 80 minutes is too much, you say? Hell no it’s not â€“ not in this case. Every track is gold. Jumping to the end of the album, Celph Titled and Apathy drop an unbelievably ill freestyle over the Beatnuts’ “No One’s Ready to Deal With Us” and the album closes with a real tough instrumental/DJ track by Tack Fu and DJ Earl-E. You could NOT ask for anything more out of this album.

By this point, you’re probably under the impression that HipHopHotSpot.com paid me to write this review, aren’t you? Well I don’t blame you. I’d be suspicious too. But believe the hype. The Aberfoyle Springs Compilation is everything you could want from a rap CD. It is what a compilation is supposed to be â€“ an absolute showcase for the skills of everyone involved. Literally every track could be considered a standout. It’s got enough variety to stay fresh, but it’s not too eclectic for its own good, and it gets BETTER with every repeated listen. My utmost respect goes out to everyone involved in putting this one together. As for you, the readers of this review, I just don’t know what else to tell you. Do yourselves a favor and buy this record. Now. You’re only hurting yourself if you don’t.