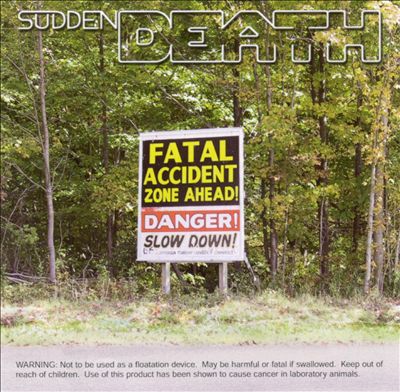 Parody — most people associate the word with Weird Al Yankovic, but the tradition in hip-hop has deep roots. KRS-One’s “South Bronx” was essentially a parody of MC Shan’s “The Bridge” – a mocking recreation of Shan’s lyrical style used to both diss him and dismiss him. What about “The Bridge is Over” though, and KRS-One’s now infamous line “Roxanne Shante is only good for steady fucking?” Well +she+ is a parody rapper too, who got her name while mocking UTFO’s hip-hop hit “Roxanne.” Parody in hip-hop even extends all the way to the Supreme Court; where the lewd rap group 2 Live Crew won a decision upholding their artistic right to remake Roy Orbison’s “Pretty Woman” in their own humerous way.

Weird Al’s songs like “Amish Paradise” and “It’s All About the Pentiums” may be the best known parody raps, but the Sudden Death crew has been making art out of this form for over a decade. It all dates back to 1987, when parody impresario Tom Rockwell got together with his friends Joe and Scott to record “Infection,” an update of Run-D.M.C.’s hip-hop track “Perfection.” By 1990 they had already achieved some notoriety by having their song “I’m Bored” featured on the Dr. Demento show. At this point Joe and Scott moved on to other things, so Tom made Sudden Death into virtually a one-man show, enlisting the occasional help of a cast of extras to help him record and produce music for his raps. Throughout the 90’s, Tom a.k.a. Sudden Death released a string of parody albums such as “Dead Things Can Rap Too” and “Brain Dead.” 1998 became the watershed year for Sudden Death when a parody of KRS-One’s “South Bronx” (note the irony) was the 4th most requested song of the year on the Dr. Demento show. The reason? “South Park Junkie” rewrote the song as a tribute to those lovable little assholes from Comedy Central.

2002’s “Fatal Accident Zone” stays right in the zone that Tom and his erstwhile bandmates know best – send-ups of seminal rap hits. The very first track “New Jersey Lifestyle” rewrites an underground mixtape hit by Fat Joe into an examination of the Garden State’s banality. If that’s too obscure for you, “Star Trek Life” may be more your cup of tea – it’s pretty easy to guess what Jay-Z song this was based on. If it never occured to you the repetitive beeps and whining automatic doors of the original Enterprise would make a slamming hip-hop beat, think again. The humor gets even better, and a little bit sicker, when Rockwell raps the Ludacris’ hit “Area Codes” in the new guise of “Alieh Probes.” Think South Park again, or if you prefer, the “Men in Black.”

Even though joking versions of hit songs by the Fat Boys and Kid Rock make up the majority of ths album, some original songs are also thrown in the mix – and these have a high laugh factor too. “Blow Up the Bathroom” was inspired by a Hot 97 morning show debate about guests who stink up your toilet, taken to a comedic extreme. “Hangnail” is a send-up of hardcore gangsta rap in a Beastie Boys style, and “Internet Love Connection” pretty much speaks for itself. Lest you think S.D. is only inspired by hip-hop, they even have a rap song that borrows from INXS’ “Never Tear Us Apart.”

Unfortunately, given that Weird Al Yankovic is their only competition in the genre ofSTRICTLY comedic parody rap (not just to diss) Sudden Death suffers a bit by comparison. Sure, Tom and Weird Al are both white bread, but Yankovic’s ability to spoof Coolio is scarily more apt than Rockwell’s attempt to mimic Pras on “Superfriends,” which is still an inspired send-up of “Ghetto Superstar” all the same. The quality of the music he and his S.D. friends creates also ranges from “decent” to “good” but somehow lacks the polish of their erstwhile competitor. It serves to point out that Yankovic got his start on the Dr. Demento show as well, and might have languished in lowball comedic obscurity were it not for a few good breaks and the birth of MTV. Sudden Death has been on the verge of being it, the next big joke (and I mean that in the best way) for years. This CD suggests that their targets are ripe for the mocking and that their original songs are witty too, but their rotten apple still needs a bit more polish. If I know Tom Rockwell though, he’ll keep creating demented send-ups of rap tunes whether S.D. ever hits it big or not, and for those of us who need a break from the often too serious rap world (as Martha Stewart would say) it’s a GOOD thing.