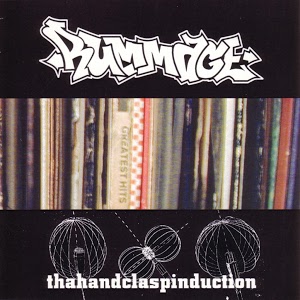 Straight from 215 Records, the label claiming to be “Philly’s subterraneous music movement,” is a new underground artist by the name of Rummage. With joints recorded and mixed by Sean C. and CI, and rhymes written and produced by C. Palmer, that’s as much as one can ascertain about who Rummage is. These facts are gleaned from the liner notes of his CD. The press sheet that came with his CD says less, and his “bio” on the 215 Records website is completely blank as of the writing of this review.

Being unknown and mysterious does have advantages for an artist though; among them that nobody knows what to expect of you for better or worse. Left with a lack of miscellaneous and often meaningless information, Rummage’s debut album “Thahandclaspinduction” stands on it’s on two. At least, one assumes that’s two, unless Rummage has a peg leg or missing appendage we don’t know about.

If the two legs of a good soloist’s rap album are beats and rhymes, Rummage would probably have a wooden foot; possibly even a replacement leg running all the way to his left knee. On his right leg, Rummage stands on a platform of heavy beats. These are the kind of beats most underground MC’s wish they had access too – heavy bass, pulsating riffs, and a slightly electronic and futuristic sound. The sound is what Rubberroom and Deltron 3030 would be if they gave birth to a bastard child through cloning; and fits what 215 calls “subterraneous” to a tee. Any deeper, and Rummage would be hanging out in the sewers with Das EFX and the Ninja Turtles.

As you’ve probably surmised by now, it’s in the area of lyrics that Rummage got cut off at the knees. Even though I previously rated Philly rapper and producer Grand Agent a 5 in the rhyme writing and flow delivery departments, he sounds positively ebullient on “James J. Hill” compared to his partner in rhyme. That means either Rummage is incredibly mediocre, or I completely misjudged G.A., but in this case it’s probably a little bit of both.

Simply put, Rummage’s verbal scheme has two problems. The first one is his tendency to disguise simplistic lyrics as being more complex or profound. Even when he crams 60+ syllables and big words into a line, the rhyme scheme remains as AABB as if he finished two with “cat” and “hat” and the next two with “dog” and “log.” Underground rappers usually get over by combining non-traditional lyrics with non-traditional rhyme schemes, but Rummage is an old school-esque rapper without the old school beats. Even when he breaks out new styles on songs like “Grandeur” it still doesn’t work due to Rummage’s other lyrical problem – a monotonous voice that makes Fabolous sound like D’Angelo by comparison.

I really wanted to believe in the 215 Records mission statement, but despite occasional dope songs like “Metropolis 95” and beats that would mostly headnod as instrumentals, Rummage does not get over. Fortunately Rummage isn’t 215’s only artist so their next generation Philly hip-hop could still get subterraneous; they have a ways to go though before they match the Michigan crew of the same name. Hopefully the beats on this CD are a sign of greater things to come.