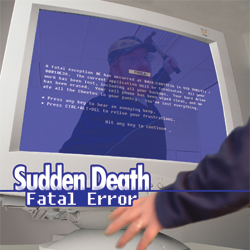 When I was in junior high school, my friends and I used to make up tapes of ourselves rapping about classmates and teachers over Casio beats. There was a rap about our nerdy science teacher, a rap about corn, and my favorite, a rap where we used a sample from a kid’s record, and then sped up our voices using a tape recorder with old batteries. Those tapes exist somewhere in boxes in my parents garage, and one of these days I’m going to dig them out and have a slightly humiliated laugh listening to them.

Little did I know, but a few years before my friends and I had the idea to lay down joke raps, Sudden Death had started doing the same thing, only much, much better. The year was 1986, Weird Al was rocking the charts with such knee-slappers as “Like A Surgeon” and “Yoda.” Inspired by his love of hip hop and comedy, Tom “Devo Spice” Rockwell formed Sudden Death with two friends, offering up joke raps and parodies of popular hip hop songs. In 1990, they had a hit on Dr. Demento with “I’m Bored,” and in 1998 they were on the top of the Funny Five Countdown with “South Park Junkie.” “Fatal Error” is their latest amalgamation of jokes and beats.

The jokes are pretty much what you’d expect from a group that spends a lot of time on the Dr. Demento show. There are songs about cell phone reception, prescriptions, Pac Man, having the flu, and Wikipedia. A lot of the disc makes fun of computers and the crazy, infuriating things they do. It is all good-natured, and cornier than a farmer’s market in Iowa. It’s akin to hanging out with that wacky uncle who still thinks hand buzzers are a hilarious: kind of funny and kind of painful.

The disc includes both original compositions and parodies of popular songs. Thus, Kanye West’s “Stronger” becomes “Longer,” about having a small penis; Akon’s “Smack That” becomes an ode to Pac Man; “My Adidas” becomes “My Atari,” about the classic video game console; and “I Know What You Want” by Busta Rhymes becomes STD anthem “Give It to Everybody.” The songs sound reasonably like the originals, and the production values are pretty good across the board. Devo Spice isn’t exactly competing with Lil Wayne or Jay-Z for the “Best Rapper Alive” title, but he’s good enough for government work.

I won’t mince words: I don’t like “funny” music, including but not limited to Tenacious D, Flight of the Conchords, Monty Python, and Spinal Tap. Even when it is actually funny, I never want to listen to the song more than once. Sudden Death aren’t quite as clever as Spinal Tap or Monty Python, and a result, I couldn’t even listen to this entire album. However, if you think Weird Al is a genius, and are a regular Dr. Demento listener, then you will probably love “Fatal Error.” And that’s OK. Weird Al, Sudden Death, and Dr. Demento need money, and no one is getting hurt. So put this on, crank your stereo up to eleven, and enjoy the slightly dorktastic humor of Sudden Death.

In deference to their love of Weird Al, I’m rating Sudden Death on the Weird Al scale.

Music: Eat It/10
Lyrics: Another One Rides the Bus/10
Total Score: My Bologna/10