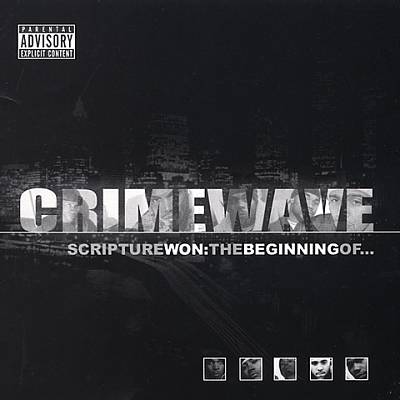 Crimewave :: Scripture Won – The Beginning of…

When I first listened to this record, I was out jogging. Trotting along the path, I suddenly heard thunder that was hard to make out where it came from. Was it thundering over my head in the sky or in my headphones? I soon found out when it started pouring, urging me to hurry on and finish my run. But the sound of thunder would definitely not be out of place on this record. It’s a dark record. Not as spectacularly dark as Mobb Deep’s “Hell On Earth” or GZA’s “Liquid Swords”, but still pretty obscure.

To get from out the shadows of obscurity is the aim of Crimewave who make their debut with “Scripture Won: The Beginning of…” It would be quite an achievement for a label – Crimewave Entertainment, run by their leader Shamus – that started out as a countermeasure against the music industry’s criminal tactics. It was in 1996 that Shamus released his single “Big Willie Style”, following up with 1997’s “Tight Team”, which both sold 35,000 copies combined. His 1998 EP “Serving Life” featured the talents of Fluid and Maximillian, shipping over 20,000 units independently. Who says New York rappers can’t go that route? Completed by Skar and Karachi-Raw, Crimewave are out to prove they can, still escaping the shackles of music biz slavery.

They got some of the ingredients to make it on their own. Crimewave could get by on the strength of that NY mystique that some of us still fall for. Five rappers coming out of nowhere, laying claim on New York’s neglected rap legacy. They even have all the right beat smiths such as The Alchemist, Buckwild, Cochise, Psycho Les, V.I.C. or DJ Shok. The rap world loves being taken by surprise, and at first it looked to me as if we were in for such a surprise in this case. Upon closer inspection, however, I don’t see it happening.

This record will make you realize that your Wu-Tangs, your Mobb Deeps, they don’t fall from out the sky every day. There’s a next level for these “niggas suited up / MP 2thou with 100 bars booted up” they have yet to reach. For one, they fail to constitute a group. They may be one, but you don’t hear that on record. They DO have one common cause, and that’s to make it big, outlining the way to achieve this in their single “Think Big (Get Big)”. Over a classic piano-based beat courtesy of The Smith Bros., Shamus, Skar and Karachi-Raw gather phrases that I guess should prove the point being made by the song title: “It’s not the bark, it’s the bite,” or “Fuck them other niggas kickin’ bitch business,” summing it all up in the chorus:

“You think big, get big, think small, stay small
Still ain’t sure? Stay the fuck away from y’all”

The problem is, they may think big, but what they do is pretty average. There’s nothing to make this album REALLY stand out, not the flows, not the rhyme styles, not the lyrics, not the topics, not the songwriting, not the attitude, not even the beats that are done by some of NY’s finest. They also fail to hype themselves effectively, neither as individuals nor as a group. Experience shows that fans will have a hard time identifying with someone who doesn’t state his name enough or lacks some special type of ‘persona’. All this would mean that the path is cleared for rap free of politics and bullshit. To a certain degree, Crimewave is exactly that.

The retrospective “Hard Times” may be looking for sympathy too hard, but still there’s a certain sincerity exercised by Shamus, Fluid, Skar and Karachi-Raw that’ll have the listener relate to lines like:

“Talk about hunger, every hour I was gettin’ thinner
I spent the coldest winters wrapped within my sheets with sleep for dinner
My stomach speakin’ in languages, for syrup sandwiches
Pissy matresses, nothin’ but disadvantages
Soggy hot dogs cause when the ketchup bottle’s empty
mom would dilute it in some water, shake it up and now there’s plenty
Many mornings I wake up with no heat from a broken boiler
I had to take a bath, would simmer pots of boiled water
I’m still at my parents house sleepin’ on the couch
and I know that they can’t wait till I get out
I’m livin’ the hard times”

After this early highlight, “Scripture Won” keeps its momentum with Skar’s “Wild 4 Life” that features a carefully crafted beat by Cochise that makes much more of the piano than just simply looping it. Next up is Karachi-Raw, who turns in a quite impressive performance on “Certified”. But Crimewave do work best together, as evidenced by “Johnny”. Alchemist drops the criminally good beat, and Shamus, Karachi and Skar expose some guy whose name just so happens to rhyme with ‘Donnie’ (Brasco, that is). Whenever Crimewave succeed to channel their street experiences into detailed accounts, they’re on the right track.

But not even 7 MC’s (including guests C-Terra and Boxx) can save DJ Shok’s uninspiring keyboard routine performed on “No Luv (7)”. “Tell Me” feels even more out of place. I’ve hardly ever heard a more clumsy attempt at a club joint. And this after they mock the current trend of speed rap in one of their skits. There’s nothing wrong with breaking from the routine, but it shouldn’t look so blatant. Maximillian does it right with “Don’t Talk About Love,” an intricate account of a relationship that took a turn for the worse. Dope shit.

But inconsistency keeps getting the best of Crimewave. Take “Dan-sin Teardrops” that has beautiful moments such as Fluid’s declaration “when many embrace the winners, the champions, heroes and greats, I’ll never forget those who lost the fight”. But Shamus’ line “this is my world where the teardrops dance on the floor” makes really more of the song than there is to it. Especially since producer V.I.C. (who is usually a safe bet) messes up with the beat. The same goes for Tahir & Abu’s “It Ain’t the Same”, the obligatory ode to maternal love.

In the end it’s really hard to chose sides (“What Side You On”), to decide in favor of or against Crimewave. They DO show promise, especially Fluid and Maximillian (who both should have been featured more prominently), but together the five of them should have been able to pull off a more convincing album. But if you’ve been fiending for some street-level New York rap that will do just fine without Neptunes production and major label exploitation, this record might be for you.