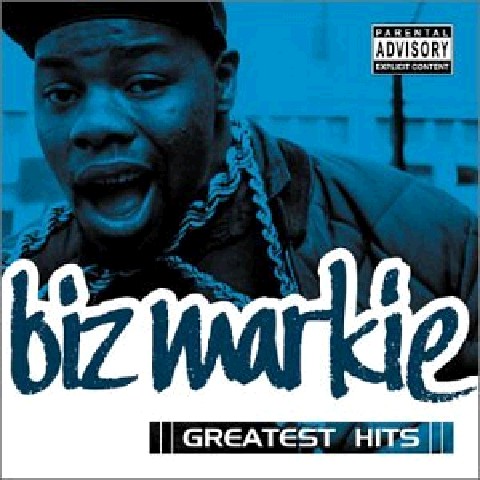 The irony of this 2002 release is that any other Biz Markie album reviewed on this site would automatically be a ‘Back to the Lab’ entry. In fact, given that this LandSpeed release compiles some of his best songs from 1988’s “Goin’ Off” all the way through 1993’s “All Samples Cleared,” 90% of this album is perfect material for just such an entry.

For those in need of a late pass who never heard of the Biz before now, you may still know him anyway as the overweight alien from the post office in “Men in Black II.” Unfortunately this amusing cameo appearance will give you no real insight why Will Smith recruited him for the film, but this album of his classic raps provides ample reference material. Biz was originally brought into the Juice Crew (Big Daddy Kane, Masta Ace + more) to rep the often unrecognized fifth element of hip-hop – beatboxing. Biz’s penchant for unforgettable catchphrases and humerous rhymes was too big to ignore though, and he was soon sharing the spotlight on hits like “Make the Music With Your Mouth Biz.”

While it’s worth noting that Big Daddy Kane penned some of Biz’s biggest early hits such as “Biz is Goin’ Off” and “Vapors,” these songs wouldn’t have worked if rapped by Kane himself. In fact in the latter case it would have been extremely strange, since Biz raps ABOUT Kane being jocked by all the people who wanted nothing to do with him as a child. To this day the legacy of “Vapors” is that the song is sampled by other rappers for hundreds of records and referenced in rhymes by even more. Can Kane take sole credit for this legacy? Without the Biz saying the rhymes, no. He made them his own, regardless of who wrote them.

Biz Markie had no problem writing his own witty songs on later albums, as the inclusion of his smash hit “Just a Friend” from “The Biz Never Sleeps” proves. This top ten comedic crossover cut showcases the Biz at his very best, or some would even say worst, as he croons the chorus of the song in a loud off-key style that was truly his own. Was it bad on purpose? It had to be, because the sheer awfulness of it was what made it so charming – no matter how bad of a singer you are, you can caterwaul right along with him. To prove how funny it was he even dressed up as a classical pianist in a white powdered wig to bang on a piano in the video. If you get a chance to see his facial expressions as he gets dissed by girl after girl in the song you’ll know why Will Smith holds him in such high esteem. Just flip the coin and Biz could have been the sitcom star instead of Will.

Sadly Biz Markie’s career was derailed in the 90’s by a lawsuit from the obscure (and anal) Gilbert O’Sullivan, who sued him and his label Cold Chillin’ over a sample from “Alone Again Naturally.” The repercussions of this case are still being felt in rap today. The deciding judge decreed all copies of the album “I Need a Haircut” which it appeared on to be pulled from shelves and that ALL samples had to be cleared by the original artist before appearing on a record. For those who remember the Public Enemy song “Caught, Can I Get a Witness?” this was eerily prophetic, and for the fact Vanilla Ice got away with sampling Queen on “Ice Ice Baby” without being sued it was even MORE insulting. Thankfully the songs “What Comes Around Goes Around” and “Busy Doing Nuthin'” from this forgotten rap masterpiece are included for your listening pleasure.

Biz was pretty upset about the whole thing and with good reason when his 1993 album “All Samples Cleared” came out, but this was to be the last full length rap album by Biz in the last ten years. “Young Girl Bluez” shows up on this compilation, and it’s inclusion proves that Biz’s reign was cut short far too soon. The Salaam Remi beat was a smooth set-up of a soft bassline, harmonizing, and piano drops mixed with a Slick Rick vocal lift for the hook that’s perfectly weaved with Biz’s mournful tale:

“Proceedin along, I must have to say
It was comin very close to her birthday
I asked ‘What do you want?’ She said ‘A pair of earrings’
I never knew what an avalanche the future brings
Her birthday came and she gave a party
I arrive kind of late to the place to be
People was excited for seein my face
If my mother ever knew I would be a disgrace
They sung, ‘How old are you now?’ to Rhumba-reen
I was in shock when they screamed ‘Sixteen!’
I felt like fallin apart when I heard the news
This is the never-endin saga of the young girl blues!”

Poor Biz – the ones his age don’t want him, and the ones that do he can’t have – the man just never wins! This “Greatest Hits” album is a winner though, not just for the classic cuts from the Biz’s catalogue that are included but the surprising addition of his obscure singles “Turn Tha Party Out” and “Studda Step” released in the last few years as an attempt to revive his career. The latter track was a personal favorite when I was a radio DJ at Iowa State University because the acapella seems custom made for scratching:

“I said I said I said I said my name is Biz Markie
And all the people always know me for my co-me-dy
I make you laugh I make you giggle ha-ha-hee-hee-hee
I graduated from, Hip Hop University
I got I got I got a license from the DMV
And sometimes you see me rollin in a Cherokee
Whether I’m in Connecticut or D.C.
I make I make a party cook like Chef Boy-ar-dee
I be I be catchin wreck on the M-I-C
And you can go with the flow or you can disagree
You know you know you know you know I got a degree
Or you can get a D.T. to check my pedigree
Now you can write the N-double-A-C-P
Or ask Al Sharpton how I be
You ah you ah you ah you will find definitely
that NO-BODY BEATS THE B-I-Z!”

Will Biz Markie’s appearance in “Men in Black II” lead to the long awaited revival of his rapping career? Probably not, because the Biz now makes his living AS a DJ, spinning at parties and industry functions. It’s a shame the man who once made the hits now only plays them for others, but I’m still glad he’s involved in hip-hop in ANY capacity. Those of you who’ve seen my e-mail signature know it includes an all-time favorite Biz Markie quote: “They say I look and sound ugly but I don’t be carin.” Damn straight – he may be in the running with Jermaine Dupri and Craig Mack for the winner of the “bashed by a brick” rap face, but his lighthearted and enjoyable raps were in the words of Keith Murray “the most beautifullest thing in this world.” Old school Biz fans will be pleased as punch by this LP, and newbies will find it a refreshing change from most of what passes for rap music on the radio today. This is a MUST OWN album.