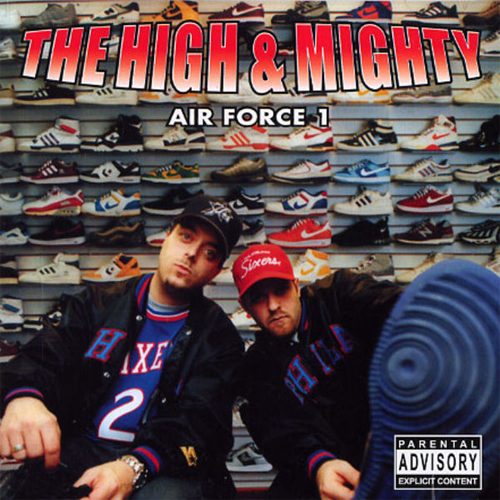 On Eminem’s new and soon to be hit single “Without Me” he brashly claims to be the original crossover white MC, the one whom millions of imitators copy from in an attempt to duplicate his success. Putting aside the historical errors here for the moment (did we all forget the eight million records Vanilla Ice sold, and how many imitators HE had) there’s one more significant problem with this claim: not EVERY white rapper is looking to blow up and sell millions. There are some who would be happy selling anywhere from ten thousand to five hundred K, as long as it was predicated more on dope beats and rhyme skills than controversy and celebrity dissing.

Enter The High & Mighty. Though lead rapper Mr. Eon did once cross paths with Eminem on the duet “The Last Hit” some years ago, they diverged and went down completely different roads. Both rappers posess the abundant skills to win in any rap battle or cypher, but Eminem cashed in on his style with slick pop tunes of shock raps while Eon and partner DJ Mighty Mi stuck with the underground and the kind of songs you might hear Bobbito or Stretch Armstrong spin – in other words, it’s not drive time pop rap material. Even if Mr. Eon had the ambition to be that large (we can’t know what he thinks) two things keep him solidly beneath the surface: dirty beats and an even dirtier vocal tone. His gravelly flow could make even Evidence of Dilated Peoples sound soprano by comparison.

For the latter reason more than any, The High & Mighty continue to have a love hate relationship with their fanbase. Eon has some of rap’s wittiest punchlines and exhibits a slow-flowing breath control that’s always on time, but some people don’t dig his voice. Hey, some people front on Guru too, so it really doesn’t matter – you either like him or you don’t. Those who do will find the “Air Force 1” EP to be a welcome treat, if almost Todd Shaw in it’s length. From the boot stomping beat of the “Two Minute Drill” intro all the way through to the funny “What’s After” closer, Eon and Mi provide the classic sounds fans will remember from their full-length “Home Field Advantage” distibuted by Rawkus Records. Guest producers and rappers get in the mix too though, such as Copywrite on the Reef produced “Nowhere to Hide At”, Havoc of Mobb Deep and R.A. on the Ayatollah laced “You Don’t Wanna Fuck Wit” or his partner Cage from the Smut Peddlers on “More In Outs.”

Two cuts in particular will really leave High & Mighty fans wide open though: the 3rd Bass inspired “Mighty Mi in the Land of Deadstock” and the SUPERB J-Zone produced “Artillery.” More than any other track, “Artillery” proves that even though Eminem has the reputation as hip-hop’s nastiest white boy, he’s not the only one who can make you laugh and revolt you at the same time:

“And it’s a shame for these shit-for-brains
Something stink around here, y’all better check for stains
and duck when I throw them vinyl lacquers
Or you catch spinal fractures to you by chiropractors
[..]
Brain subtracted, counteracted
What you expect? Skull made out of plaster of paris
Don’t fuck with Eon and J-Zone last
That’s like Edward Scissorhands wiping his own ass!”

To sum it up, this miniature dose of Mighty Mi and Eon’s skills will only serve to whet the appetite of underground hip-hop fans who already know the group or crave the kind of rugged sounds you don’t hear in the pop top 10. For $10 or less, this EP should serve as a nice antidote to the blase blah that dominates the airwaves.