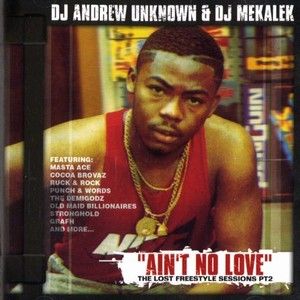 It’s a myth that great beats can make anyone sound good, which is why GangStarr’s first album was wack, The Firm flopped, and many radio artists won’t be around post-Neptunes. In vocal hip-hop the DJ needs the MC as much as the master of ceremonies needs him or her.

DJ Andrew Unknown and DJ Mekalek recognize this like a motherfucka, which is why they came, as Meth would say, razor sharp with the beats, with the rhymes for any DJ. This 70-minute, 21 freestyles extravaganza is about 30 deep and reads like a wet dream for a backpacker: Percee P, Masta Ace, the Boot Camp Click, Apathy, Breez Evahflowin… and there’s enough room for bastards to get on the mic twice.

The beats though will have you locked down like Chi Ali. This shit had me completely captivated from the Illmatic-style intro — I can’t even spoil it here — until well into the second half. The duo pull an Ice Cube and jack everyone’s shit — Premier, Ali Shaheed, Pete Rock, Havoc — and yet, at the same time, put their unique spin on things. For example, the first cut, “Premier,” has Main-Flow, Louiville Sluggah and Wordsworth flowing over a mellow guitar:

“Ayo, I’m pissed, so here’s a list with what I’m heated about
Many fear what’s on my mind leaving my mouth
What are you screamin’ about, fleeing from the Ds and be out
You don’t have kis in your house, you’ve got keys to your house
I ain’t eatin’ you out, all out the top the cleavage is out
Why are you hidin’ on your knees? You need to be out
The other day this was a track that I was dreaming about
You actually thought about pressing this up and leaving me out
You follow while I’m leading the route
I’m playing Jay-Z Reasonable Doubt, I-95, fleeing South
Promotions and big budgets all you need to come out
I work to be the illest and that’s not what it’s even about”

…and the beat stops when he says “I’m playing Jay-Z Reasonable Doubt, I-95, fleeing south,” and, as he says “Promotions,” the first basey keys of Jigga’s “Coming of Age” come in. Now they’ll spend the remaining minute and a half flowing over the same beat he was just talking about. Simple, but brilliant.

Little unexpected gems like this prevent the theft-heavy DJs from falling into the LAMF (Lazy Ass Motherfucker) category. Even more noteworthy is that almost every song is named after the jacked beat: you can expect Mobb Deep’s “Still Shinin'” wrecked by Rock, Wu’s “C.R.E.A.M.” flipped by Percee P and Rok One, and Geto Boys “My Mind’s Playin’ Tricks On Me” flowed on by Al-Shid, Hug and J-Zone. Luckily, as with the Jay-Z changeover, there are surprises within the standards: the biggest gasp for me was hearing a *third* beat switch on Broken Bus’ oddly-named “Time Machine & Funk Bunker Fleet” to Apache’s “Gangsta Bitch.” I swore I was the only bastard that remembered that shit!

Instead of remaking the songs — like how do you remake “Unbelievable”? — most of the MCs wisely avoid imitating their favorite artists. I was really impressed at how cuts I knew like the back of my hand, like ATCQ’s “Midnight” or Fat Joe’s “Firewater,” were reinterpreted by the gifted linguists.

There are more quotable quotes than Jeopardy, making the whole album a treat. One hot track is Punchline, Mike Zoot and Al-Shid’s “Real Hip Hop,” named after the Das EFX song with the tasty Pete Rock guitar lick.

“It’s on lock, no rapper in the game can stop me
I got a 20-inch dick, that’s why my attitude’s cocky
You’re not me, so do you, I blaze crews
I destroy the nobodies and the who’s-who’s, I make moves
Like Jesus, you all praise me, I’ll impregnate your girl
but you’re saying it’s your baby
It’s crazy, that night your chick was feeling me
Don’t be surprised if your child got great rhyming ability
No one is as ill as me, don’t forget it
My lyrics will change the world like September 11th
To the death I rep it and don’t none of yaw want it
In the battle I got yaw callin’ for reinforcements
I get cash endorsement for 16-bar verses
All worthless, apply pressure and you get nervous
I’m cold hearted, when I spit it gets frigid
I’ll mail you a battle with anthrax in it
Either the envelope or the rhyme will kill you
When I’m done you’ll be sippin’ on herbs to heal you”

We’re dealing with freestyles, so not everything is completely tight. Mr. Complex can’t seem to ride Extra P’s “The Mad Scientists” right, and Absolute and Pumpkinhead weren’t prepared to take Big’s “Unbelievable” to that next level, though they definitely get props for trying. With the exception of these examples, none of the beats made me want to dig up the original song: I *liked* how the songs were reinterpreted.

In 2002 there isn’t a CD that I’ve listened to for RapReviews that I’ve felt more than this shit. I spun it for a whole week before this review and it will probably stay in the deck until I change my calendar.