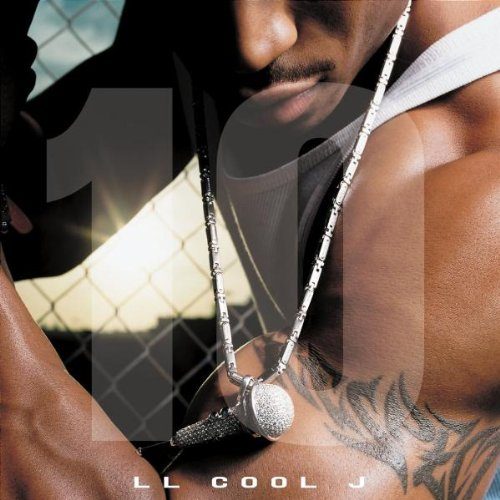 10 albums, hmm? To recap how we got to this point, here’s a list of all of L.L. Cool J’s new albums to date chronologically:

Unless someone miscounted, that’s only eight releases; when “10” is included it’s actually L.L. Cool J’s NINTH album of new material. How did James Todd Smith arrive at this number? Perhaps Def Jam convinced him to count “All World” as part of the L.L. history, even though that release was a retrospective of his greatest hits to date. Whether “10” is actually L.L.’s tenth album can be debated about by hip-hop historians, but of more immediate concern to his fans and to rap listeners is whether or not “10” is a ten MUSICALLY.

When Mr. Smith declared himself the “Greatest Of All Time” in 2000, the claim was met with some skepticism. Has L.L. Cool J released more albums than any artist or group in rap history? Not quite. Too $hort legitimately reached the ten plateau in 1996, the same year L.L. released “All World” – and to date doesn’t have a greatest hits CD. KRS-One has eleven albums dating back to Boogie Down Productions, and that’s without counting HIS greatest hits CD. If L.L. doesn’t hold the all-time record for rap longevity, maybe he deserves the title for having the most hits. That leaves out everybody from Run-D.M.C. to Scarface to Jay-Z, who have all repeatedly struck paydirt with hot singles from gold and multi-platinum albums. So maybe he deserved the title for being rap’s most verbally skilled MC? Even during his first ascent in the 1980’s still had to contend with the likes of Rakim, Big Daddy Kane, Ice Cube and Chuck D for mic dominance. Since then, hip-hop has seen everybody from Ras Kass to the GZA stake a legitimate share of the “greatest MC” in rap music.

L.L. really can’t afford to rest on his laurels. While he has earned a lot of respect for his continued presence in rap music going on three decades, consistancy has always been an issue for the self-described G.O.A.T. As much as his fans and hip-hop heads worship albums like “Radio” and “Mama Said Knock You Out,” few can forget how lousy “14 Shots to the Dome” or “Phenomenon” really were. “Greatest Of All Time” redeemed him somewhat for the latter with a longer album of higher quality beats and rhymes, but even that couldn’t fully counteract the suspicion he had gone Hollywood with movie roles like “Any Given Sunday” and “Deep Blue Sea” (which also had an embarassingly bad L.L. single), not to mention his role on the long-running sitcom “In the House.”

The ultimate conclusion has to be that whether L.L. Cool J has ten albums or just one, he still has to prove himself each time out. “10” certainly features the right producers for the formula: Trackmasters, Ron ‘Amen-Ra’ Lawrence, DJ S&S, and most importantly – The Neptunes. They produce one-third of this 15 track album, including the lead single “Luv U Better”:

“I used to tell you that your hair looked fly
Kiss you slow and stare in your eyes
Now I talk real foul and slick
Every other sentence is, “You make me sick”
Back in the days I was your number one pick
Now your heart’s half-broken and that’s hard to fix
I had to dig deep inside myself
Cause I can’t see you bouncin with somebody else
It’s a long journey back to the place we was
When I was too embarrased to admit I was in love
And you was my good girl that wouldn’t give it up
I can’t let us self-destruct, uh-uh”

The song continues L.L.’s long tradition of being a rapper not afraid to show a softer side and cross over to pop radio playability in the process; a direct descendant of songs like “I Need Love” and “Hey Lover.” Even if it’s formulaic, why change the formula when it works? L.L. mastered this style of rap song a long time ago. Having Marc Dorsey sing the hook while the Neptunes create a credible mix of bass boom with smooth sound that works perfectly. Unfortunately, this is followed immediately by “Paradise,” another pop friendly song with a sung hook – this time provided by Amerie. There’s nothing wrong with it per se, except perhaps a reliance on the overused “Rising to the Top” sample that’s been done to death in R&B and rap. L.L. is risking the cred he established battling Canibus on “4, 3, 2, 1” and “The Ripper Strikes Back” though; songs he recorded in the late 90’s after too many odes to champagne, female beauty and male sensitivity. It doesn’t end with these songs though. “10” also features the candy-laced “Lollipop” and the pop bounce of “After School” featuring P. Diddy. Modern rap fans may not recognize the hook as part of Sugarhill Gang’s “Rappers Delight” but old heads who may not take it as a tribute to the original. There’s even a duet with Dru Hill called “Big Mama (Unconditional Love).” Didn’t they break up when Sisqo went solo?

The problem here is exacerbated by the fact L.L. tries to compensate for too much softness by going overly hard on ridiculous tracks like “Niggy Nuts.” Even though the Neptunes rarely flop these days, they failed L.L. on this cut by providing a backdrop of screaming banshees and overly simplistic drums that’s so offensive listeners won’t stick around long enough to hear him brag, “Paper stackin, daddy get it crackin/ chains might be gold, the joint’s always platinum.” “10 Million Stars” and “Clockin’ G’s” are the only tracks to properly showcase L.L.’s shit-kicking side correctly. “Mirror Mirror” is a sad return to the whispered flow of “Phenomenon” that should have been left in the past. More successful is “Fa Ha,” which brings up the subject of women with a new twist – the dangers of trying too hard to impress a dimepiece. Unfortuntaely despite the fact this is a new CD straight out of the shrinkwrap, this copy of the song skips from 4:11 to 4:17 in any CD player it’s put in. Searching for scratches turned up nothing; hopefully other copies of the album don’t have this flaw.

The biggest flaw of all is that L.L. seems lost lately. On “G.O.A.T.” R&B styled songs like “You and Me” and “Imagine That” made L.L. sound like a confidant pimp, and songs like “Can’t Think” and “U Can’t Fuck With Me” confirmed a hardcore brashness which dated back to the days he recorded “Rock the Bells” and “I’m Bad.” Mostly tight production and an impeccable self-assured flow with no flaws in breath control or vocal tone raise the quality beyond that of many new jacks, which is exactly what one would expect from this industry veteran. On the whole though it’s hard not to see that L.L. is searching for his sound again when every guest on his album save P. Diddy is a crooner, and Diddy doesn’t exactly imply hardcore to most people. One thing you can say about L.L. is that he’s consistant – he flips back and forth between releasing albums that are better than average to lesser than average. This reviewer for one will wait until L.L.’s TRUE tenth album to see if he comes back with a better balance between soft and hard.