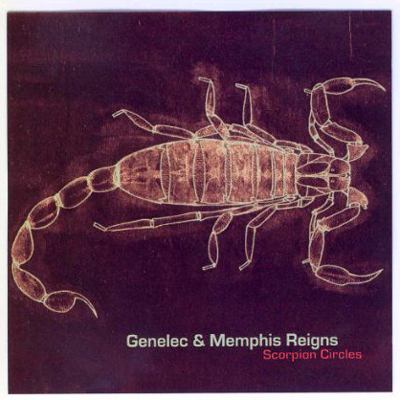 Those born under the sign Scorpio are known for getting to the bottom of things, being people with innate bullshit detectors. They tend to pick up on things other people miss. They gravitate towards shit other people don’t want to talk about or admit. Genelec & Memphis Reigns’ album “Scorpion Circles” fits well into this description, even if they didn’t intend on paying homage to the Zodiac.

Let’s start with “Anarchist Cookbook” (featuring Gamma Ray), named after the classic banned book that shows one, step by step, how to create a society of choas. With 9/11, anthrax and sniper shootings you’d probably think they’d be on some MC Hammer “We need to save America” shit. Unh-uh. We’re dealing with scorpions here, who bite into our fears like Count Chocula:

“I exist as an independent entity
Governments possess no knowledge of this identity
Operation Power Cancer
I give an investigation for the distribution of treasonist propaganda
Winery alias Steel Panther
Seven continents my feet have roamed
Instantly command every one of them overthrown
Rebel activities unknown
During NASA electricity overload
I snuck into the hanger to download various large codes
Two weeks later the Challenger explodes
You didn’t know about the NATO setting chamber
I rearranged the data on the motherfucking label translators
Chaos creator, trained in criminology, geology and neuropsychology
Intercepting Chinese technology to leave Russian satellites blocked
Penetrating Fort Knox like it was guarded by luggage locks
The target of leaders in North Korea
To a fucking Krylon can to the Mona Lisa
A fuse to World War 3 proceed to spark it
Crashing American stock markets
Leave the whole world in disarray
Sending them out to form the Y2K”

Brave words for an Ashcroft world, but they’re not *really* planning to fuck everyone up. They’re just trying to get into a terrorist’s mind — and then let you in there, too. It’s a lot to chew on… perhaps too much for some.

Luckily the voices of both MCs, albeit fast, are crisp and clear: one sounds like a heated Common, while the other sounds like a less-than-laidback Phife. Even more impressive, all the beats are produced by Genelec, which range from Bollywood outtakes (think Truth Hurts’ “Addictive”) like “Elephantightus” to slow piano grinds like “Prepare (Interlude).” The latter, if my ears are correct, flips the same sample from Jay-Z’s “Breath Control,” one of the bonus cuts off of “The Blueprint,” and turns it into a dark, menacing blues howl.

The flows, coupled with the beats, make it a very good and well-balanced album. For instance, the funny call-and-response cut “Give & Take” breaks up the heavy material and the coffee-house-guitar-tinged “Chicken Soup” is a good reflective pause amidst the aggression-heavyness of the CD. However, the scorpions sound best when they bring the heat like a pressure cooker, like on the (possible) album apex “Organisms.” Over a mysterio organ and heavy kick drum reminiscent of DJ Shadow, Gen and Memph show you that they are deeper than the average unit:

“I’m confident, so you know when I talk the talk you know I’m walkin’ it
I’m doing it for the love, take a look in my wallet
I’m awfully sorry for the rudeness of my flow
I had a bigger cipher for the better part of your show
Tally-ho, let’s get it on, I’m ready for any appetite
I’m still rockin’ this show with sign language minus the mic
Tighter than dykes, leaving you hoppin’ like some horny bunnies
Kickin’ the illest freestyle on gospel, tango or country
Whenever you feel like redeemin’ your self-esteem
I’ll even let your mother and father play records for me
[…]
While I unleash the beast you increase the peace
I reach peak and release my speech
Meet me in the middle of my emotion
Hidden in a ripple of time and floating close to explosion
Flammable when handled by man or machine or animal
Can of the meanest grammar I sample of this mechanical
Method like clockwork, sockin’ the jerks, stoppin’ the mock worth
Cock this verse, my shot hits first”