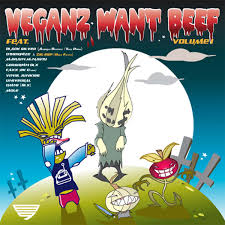 I know what you’re thinking. I thought the same thing. “Veganz Want Beef” you say, “what the hell is that supposed to be?” Well, to tell the truth, I’m still not quite sure what it’s supposed to be. Actually, that’s not entirely accurate. Veganz Want Beef is, according to the press release accompanying the album, supposedly the answer to all the “lite” rap that’s being served up lately. A big, juicy T-bone steak to contradict reputed “vegetarian” MCs and DJs that just can’t satisfy the hunger of starving Heads. The answer to your prayers, the Hip Hop Holy Grail. Just like every other act with its own hype machine, Veganz sounds damn good on paper. But how will it sound coming from your discman? To put it bluntly, lemme just say that if this here is beef, then I’ll stick to tofu and bean sprouts, thanks.

That’s not to say that Veganz is all bad, though – this is not a bad record, per se. The thing is, it’s still miles from good. “Veganz” is one of those CDs that is just so unremarkable â€“ so middle-of-the-road â€“ that it becomes difficult to find much to say about it. You know the feeling. There’s nothing on this album that’s good enough to shower praise upon, but then again, there also isn’t one specific element that stands out, screaming to be criticized; unless extreme mediocrity is that element. Oh, what’s a rapreviewer to do?

See, here’s the thing about “Veganz”: every time it seems like Mol-Man and company (a countless number of MCs, DJs, and producers) are onto something good, something else comes along to ruin that vibe. Case in point: track four, “Megadon.” Understand that on a whole, this album’s production is painfully dull. The beats aren’t wack, but they don’t distinguish themselves at all â€“ nothing grabs your attention. But on “Megadon” the beat is instantly catchy, which is nice. Then you realize that “Megadon” is a friggin’ instrumental track! This is the only track – not including skits and the intro – where no one raps. Why? I wish I knew. And speaking of skits, even they’re a letdown. “Abba vs Vegan Action” starts out promising â€“ a prank call to some sort of vegetarian food establishment could be funny. But as the skit wears on, you realize it’s a fake prank call! What the hell is the point of a fake prank call? More confusion arises from the inconsistent quality of production. Some tracks sound brilliant in terms of quality â€“ definitely studio-produced, but others, like “The Sickest”, sound so damn home-made it’s painful. Ironically, “The Sickest” would have been the album’s standout track if it didn’t sound so shitty. Maybe the Veganz crew are just a bunch of masochists, screwing themselves over on purpose. Or maybe they’ve just got bad luck. Whatever the problem is, it’s unfortunate because of how close they always come to sounding good. In fact, the only track I really can’t complain about is “2 & 2.” It’s bouncy, it’s tight, and it sounds almost like something tha Liks might have done. That’s alright. Too bad the rest of the album didn’t come together the way this cut does.

It’s sad, but about the highest compliment I can give to the Veganz is that they have good taste in movies. “BLXponent” features a sample from the movie “Rounders” as its intro. (If you haven’t seen it, do so. It’s infinitely more entertaining than this album.) A promising start, but the limp beat is so uninspired that it’s hard to even pay attention to what the MCs spit.

Lyrical content on the album, when coherent, is always either RZA-esque braggadocio or off-putting vulgarities. Word to the wise: if you’re going to take cues from RZA, then jock his beats, not his rhymes. And if you’re gonna be vulgar, at least be funny. Sample lyrics: “Shit on your couch/fuck makin it to the bathroom â€¦ if a girl want a necklace/wrap my dick round her neck â€¦ go to your house party/straight piss in your pool â€¦ I’m a asshole, I’m a damn nut.” That’s just some unfortunate shit, as far as I’m concerned.

The bottom line is this: while listening to “Veganz Want Beef”, it was all I could do to keep my finger off the skip button on my CD player, searching for something that grabbed my attention. But through 21 tracks, the only thing I took away from “Veganz” was its unbelievable mediocrity. If there ever is a volume 2 of “Veganz”, let’s hope they balance the diet, because apparently, beef isn’t interesting enough to be served on its own.