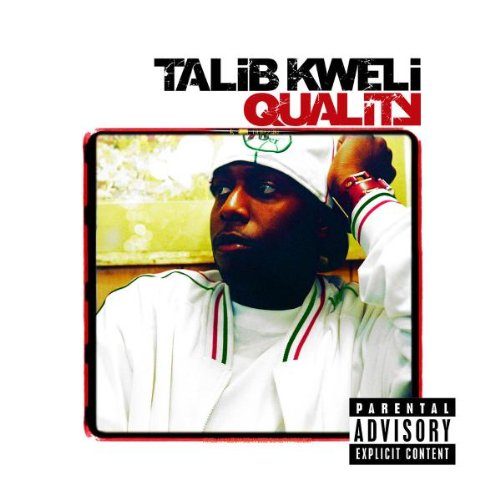 In case you didn’t already know it, Talib Kweli is and has been anOkayplayer for a while now — the musical collective that includes talented artists like Jaguar Wright, The Roots and Common. Now that we’ve got that out of the way, back to Kweli — pronounced the same way you pronounce the “quali” in “Quality”; hence the title of his new album. And although his fam is new and his album is new, there’s plenty of the same ol’ hip-hop fans already loved about Kweli to be found here.

For years, Talib Kweli has had a reputation as an insightful writer who brought higher consciousness to battle rhyming and successfully married the two through a dexterous (if often loquacious) verbal flow. Kweli has carried this reputation from Reflection Eternal (a group loosely consisting of him on rhymes and Hi-Tek on beats) to BlackStar (a partnership with Mos Def) to various solo songs and this, the second of two albums to feature him by name. Those who are biased to presume Hi-Tek is involved whenever Kweli’s name is dropped may be surprised this time that he didn’t produce a SINGLE track.

Unexpected, yes, but it doesn’t seem to have occurred out of any spite or malice since Hi-Tek is still thanked in the liner notes. Musically the album hasn’t suffered for it. The aptly named Megahertz supplies high energy tracks like the funky horns of “Rush” and straight up guitar rock of “Gun Music” featuring the Cocoa Brovaz. 2002’s perennial beat all-star Kanye West provides the soulful piano loops and clap tap rhythm of “Get By” as well as the surreally spooky hardcore “Guerilla Monsoon” with Black Thought and Pharoahe Monch. J Dilla supplies smooth soul on “Where Do We Go” and “Stand to the Side,” while a sprinkling of other slamming beat maestros can be found throughout: DJ Scratch on the superhero-eseque “Shock Body,” Ayatollah on the uplifting “Joy” featuring Mos Def, and even DJ Quik on the party-groove funked out “Put it in the Air.” Kweli is obviously thrilled about working with the West coast pioneer:

“New year, new record, time to do bigger shit
Caught a plane to Cali linked with my nigga Quik
I figure with the combination we bomb the nation but stay calm and patient
As the world get hyped from hearin our musical conversation
This a beautiful situation right here
Given birth on the track cos the cypher stay pregnant with ideas
And we rockin it – rock, rock, rockin it
Tell the hater playas put a sock in it!
Proper shit, that you got to get, cause we properly document
How cats look more like dicks than the Washington monument”

Normally we like to quote from several different songs on RapReviews to give you an overview of the album, but what Kweli says about his critics in verse two is so on point we have to come back here again and share the jewels he drops on this bangin’ beat:

“They say my rhymes is too heavy, I come thicker than the fog
You get it when I retire and battle my catalogue
Writin rhymes in my captain’s log, BlackStar date
MC’s fake like Egyptian Gods in +Stargate+
Lovin the hate, bubble all types of weight in they rap
I draw blood like mosquitos y’all annoy like gnats
Pop that around the wrong cat get laid flat
Concrete adjust to the contours in your back”

Although Kweli has occasionally had “run-off-at-the-mouth-itis” when it comes to trying to fit too many syllables in his lines before he runs out of beat, Kweli seems superbly comfortable in these tracks and tends to reign in his more eccentric tendencies. The result is that when he gets down for his crown, the words he spreads around can be truly profound. Just peep what he has to say in “The Proud”:

“Today the papers say Timothy McVeigh’s in hell
So everything’s okay and all must be well
I remember in Oklahoma when they put out the blaze
And put “Islamic Terrorist Bombing,” on the front page
It’s like sayin only gays gets AIDS, propoganda
Like sayin the problem’s over when they lock that man up
Wrong! It’s just the beginning, first inning
Battle for America’s soul, devil’s winning
The President is Bush, the Vice-President’s a Dick
So a whole lot of fuckin is what we gon’ get”

Such criticism may seem unwelcome to a public that overwhelmingly supports Dubya in the war on terror (and possibly even Iraq) but Kweli is expressing the freedom that makes the U.S. “Proud” in the first place: freedom of speech and freedom to criticize our own government. Kweli is not a preacher though, even though he’s often been wrongly accused of didacticism because of his intelligent lyrics. To answer those critics, the lead single “Waitin’ for the DJ” featuring Bilal is the perfect kind of urban groove to get your dance on to. It even harkens back to a golden era of hip-hop when songs to make you move were not opposite extremes of songs that could provoke your spirit too:

“Music is the air I breathe, the prayer I lead
Floatin in the atmosphere, up there in the breeze
It’s stronger than the revolution that you wear on your sleeve
It’s all I know! Not an idea you believe
I spit bars you can’t touch like tits in strip bars
Get charged man, I drop hits that hit hard
Hit bars with my brown sugar sist-ar
The night just start, I’m {waitin for the DJ..}”

That’s the perfect combination in a nutshell. Kweli at his best combines humerous snaps, well-constructed raps, and can even get you to groove a little bit when all you’d rather do is stand on the wall mean-mugging and actin’ hard. Those people who used to perceive Talib Kweli as the “smart nerd” of hip-hop they liked but would rather turn off to play some danceable Fabolous songs may finally have their eyes opened by these gems and jams, but if they’re not then Kweli’s loyal fanbase will still be happy with “Quality” anyway. It lives up to the title.