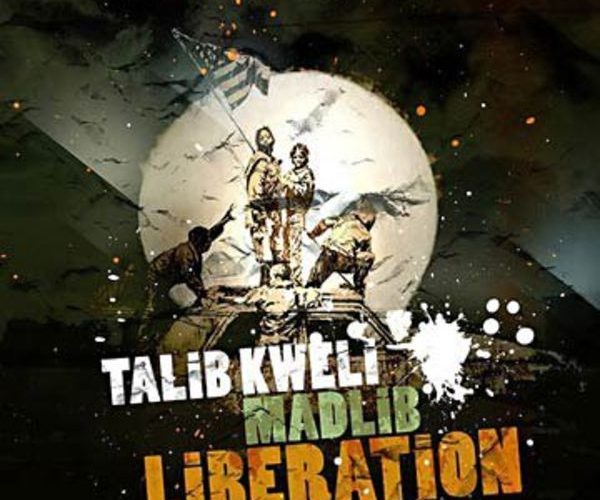 A second opinion on a free album is just straight up redundant. What would you like me to say? It’s Talib Kweli rapping over nine Madlib beats, and you don’t have to pay for it. Where can you snag yo’ self a copy? You’re online, aren’t you? All that’s left is a personal thank you to the BK Emcee and his Beat Konducta, and you’re good to go. Right?

Before you wet yourself, be aware that the album’s availability might be fleeting. The prospect of a free LP by two of hip-hop’s most revered artists sounded too good to be true at its announcement, and by the time you read this, you very well might be too late. Whether “Liberation” will see the light of record stores is unknown, but if you knew about this project in advance it’s a shock if you HAVEN’T already downloaded it.

Those who haven’t missed out should be all smiles. “Liberation,” the first of two Kweli albums this year, finally addresses his biggest criticism; since Hi-Tek bounced, his production has been very inconsistent. While “Quality” faired well with Kanye and J Dilla providing a number of choice beats, the following “Beautiful Struggle” LP and “Right About Now” mixtape barely sniffed at average, the former admittedly being Kweli’s stab at a more commercial-friendly, watered-down sound. With Madlib, the problem is immediately resolved. Not only are the beats a considerable step up, but with Talib rapping over only one producer again, the finished product is as cohesive as it’s been since “Blackstar.”

And while Kweli doesn’t sound nearly as good over the Bad Kid’s beats as MF Doom (or most of the Stones Throw emcees for that matter), it’s hard to make the guy look bad. “The Show” is quite a grand opening, with a booming horn selection and piano sample kick-starting the album fresher than any other Kweli album to date. “Engine Runnin'” is smooth as hell with a James Brown sample and cymbals that sound like steam wheezing from a halted train. “Happy Home” is simple soul, and the “Movie Scenes”-adopted “What Can I Do” is as epic a beat Madlib has crafted since the last time anyone spotted Quasimoto.

And while it’ll take being struck by lightning at least twice to lose his edge, one can’t help but notice that Kweli’s getting blunter with each passing album. Calling his performance on “Liberation” bad would be a joke, but too often do the beats (or Consequence) steal the show from him, and more than ever before do we get stuff like “get down with Blacksmith or get the fuck out the way.” Although his status as an elder statesman is as for real and respected as ever, the way he “stands up for the dudes with limited conversation” no longer holds attention like it used to. “Happy Home” is a well-executed story, and his cash flow frustrations on “Funny Money” are hilarious and interesting, but Kweli spends more time getting by off old tricks and his undoubted credibility than he does well-written rhymes.

As a team, Madlib and Kweli are good; fans of either artist would rather “Train of Thought” or “Madvillainy” any day of the week, but for the same price I would’ve taken a Ma$e and Swizz Beats Do Sinatra collaboration. Those who get it for the beats will be satisfied, those who wanted tight rhymes might be left looking for more. Both icons have busy 2007’s ahead of them, so whether you feel “Liberation” or not, be prepared for more.