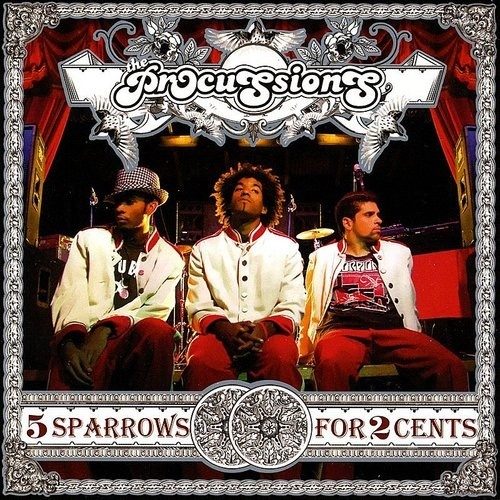 The Procussions :: 5 Sparrows for 2 Cents

Rawkus Records is BACK! Such a statement would usually have heads running to the store to cop the latest compilation of raw and gritty underground hip-hop. At the very least they would hope to find a couple of dope 12” singles from NY’s hottest up and coming underground acts. But instead the triumphant return of the underground juggernaut is probably going to be a disappointment on many levels. For one, The Procussions are just not the type of act of act we had come to expect form Rawkus. Sounding like a watered down and boring version of the Black Eyed Peas, minus the untalented white woman, The Procussions are a far cry from the hardcore head-nodding hip-hop the label used to put out. And though Rawkus was always known not be afraid to be different, being different is really all The Procussion have going for them and even so they aren’t that different.

Consisting of three members, Mr. J Medeiros and Rez who stick strictly to rapping and Stro who does all the production, The Procussions present themselves as an anti-commercial and different hip-hop group. They mention throughout the album how they’d be surprised to hear any of their tracks on the radio. I too would be surprised to hear much of The Procussions on the radio but not because of the nature of their work but because of the quality. The group is not bad by any stretch of the word, but their music tends to stay stuck in between average and good and never rises past that. Stro specializes in putting together jazzy and laid back tracks but his production is mostly boring and unexceptional. The lead single, “Miss January,” is one of the exceptions to the trend mostly because Stro finds himself taking a more formulaic approach. Mixing soft guitar notes and a sped up vocal sample, Stro crafts an appropriate smooth and sweet track for The Procussions and Talib Kweli to express their love for what is either another metaphor or a literal woman. Another stand out, both musically and lyrically, is “Little People.” Stro once again integrates a high-pitched vocal sample into the beat and Rez and Mr. J. tell heartfelt stories about children suffering from less than ideal childhoods.

“For the Camera” is another noteworthy track where the crew finds themselves trying to uplift women’s self esteem and criticizing the world’s twisted sense of what is beautiful and America’s obsession with celebrities. Stro’s beat tends to get a bit boring, but the strong subject matter helps the track. Outside of that, the album consists of tracks which aren’t bad but don’t do anything to leave an impression. “Shabach” and “Anybody” open up the album with decent beats but don’t do much to capture the listener’s attention. “Simple Song” is infused with strong political and personal messages in the verses but the nature of the song is betrayed by a beat that is too uptempo and a hook that isn’t fitting. “Fight Here” has a strong reggae influence in the beat and features reggae singing but once again the subject matter and the beat sound a bit mismatched. “The Storm” works better as the beat fits the rise to arms nature of the track but for some reason the crew’s emcees don’t sound very convincing as messengers of power and revolution. “Jiminy Cricket” and “American Fado” are both solid tracks, but do little to save the rest of the album’s average material.

Ultimately, The Procussions are a crew of rappers and a producer which have a very positive message and outlook but just aren’t all that talented on the mic. They can handle their duties just as well as 100s of other acts out there, but they offer very little that is either new or noteworthy. Rez and Mr. J have straight forward rap styles and their lyrics do hit hard at times but not enough to impress. Stro is a good producer but isn’t outstanding. The album is good for about 5-6 exceptional tracks, but not much else. If you can deal with average emcees and producers with an above average message then this album will do the trick, but personally I prefer the whole package.