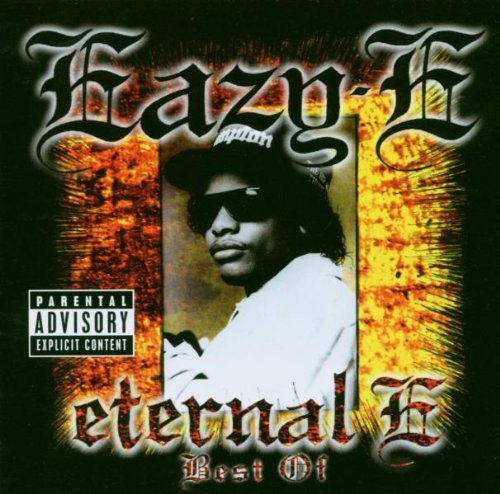 A few months ago, Ruthless Records and Priority re-issued the seminal gangsta rap classic “Eazy-Duz-It” by Eazy-E. At the time I applauded this move for three significant reasons:

(1.) The album was re-mastered for highest quality digital audio.
(2.) The re-release included bonus tracks from his “5150” EP.
(3.) Eazy-E’s legacy to hip-hop was preserved for a new generation.

Obviously both labels were happy with the sales of this release, because they decided to dip into the vault again and re-issue another Eazy-E album. This time though they’ve re-mastered and dropped “Eternal E,” a compilation album of E’s work that appeared late in 1995 after his untimely demise in March of that year. At the time of his death E had been working on a new album entitled “Str8 off Tha Streetz of Muthaphukkin Compton” but none of the tracks from it were included on this “Best Of” release; arguably because nobody would buy the release of the (reportedly unfinished) album if they did.

This is corrected to a small degree on the re-issued version by including “Ole School Shit,” but the much better single that was actually released “Just Tah Let U Know” is not on the album. Instead, the other bonus track that was added is E’s signature Dr. Dre diss song “Real Muthaphuckkin G’s” from the “187 It’s On” EP. It’s one of his best songs and it’s hard to argue with the choice, but there are some others that certainly could have been dropped to make room for it. In fact, SEVEN of the original 14 tracks on this album areFROM “Eazy-Duz-It.” Even though we can arguably all agree it was his greatest triumph as a solo artist, the move smacks as a lack of creativity on their part especially given there are only three N.W.A. inclusions and two (albiet hilarious) songs are ones that Eazy-E SUNG on: “Automobile” and “I’d Rather Fuck You.” If you have to give a little time on the mic to Dre, Ren or Cube it’s STILL worth it to use more of his material with the group to better diversify this alleged “greatest hits” CD. What about “Fuck the Police” or “Benedict Arnold”? I cram to understand them not being on this release. And it’s really confusing that they couldn’t drop the three songs from “5150” on this album, since all of them just appeared on the re-released “Eazy-Duz-It.” What’s the logic?

The problem ultimately is that hardcore Eazy-E fans probably have all of the albums these tracks are culled from, with the possible exception of “Eazy Street” from the “Return of Superfly” soundtrack. More obscure songs like this would have enhanced this album, which ultimately despite being newly digitally re-mastered and improved with a couple more tracks still has the same problem it did in 1995: it’s just not comprehensive enough. Don’t misinterpret the low scores here – it’s not because the songs that are included are whack, it’s just because if you bought “Eternal E” or “Eazy-Duz-It” the first time around (or even the re-issue of the latter) it’s ultimately a waste of your money. Even if you didn’t, a true Eazy-E fan could probably homebrew a better “greatest hits” for you than this.