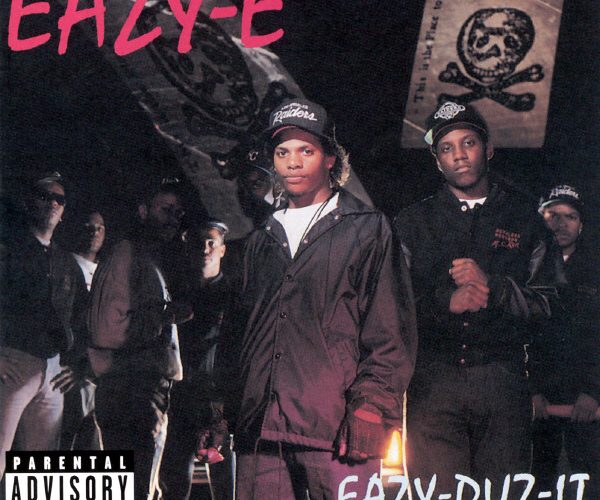 To those who aren’t familiar with Eric ‘Eazy-E’ Wright, a late pass on his importance to hip-hop is in order. Here’s a short list: he founded Ruthless Records, recorded the seminal classic “Boyz-N-The-Hood,” is credited with putting the group N.W.A. together (Ice Cube wrote the rhymes for the aforementioned song) and in the 90’s even signed Bone-Thugs-N-Harmony to his record label.

Tragically, the life of this pioneer was cut short in 1995 at the age 30 by AIDS. His impact still continues to be felt even today, as compilations like “The N.W.A. Legacy” have long since proved. The family tree of well known artists tied to this history has too many branches to name, so it’s a good thing they are not the focus of this review. Instead, fifteen years after it originally hit the streets, Eazy-E’s gangsta rap album “Eazy-Duz-It” has been remastered and re-released by Priority Records. This newly minted version offers the hip-hop nation a chance to examine his contributions in perspective.

First thing you should know is the entire album was produced by Dr. Dre and DJ Yella for High Powered Productions. That means the music is on hit – a slew of old school, trunk rattling, funky ass hip-hop bass laced classics. The pounding sound of the “Boyz-N-The-Hood (Remix)” is only a starting point. There’s the P-Funk swing of “We Want Eazy,” the infectiously head-nodding “Radio,” the hardcore Ice Cube penned “No More ?’s” where Eazy lambasts a naive reporter, and the Sugarhill Gang influenced “I’mma Break it Down” among others. E is the enigma in this mix. During the era when Ruthless reigned supreme, it wasn’t hard to hear E anywhere you went – and that’s not just because of his label’s popularity. He has a high-pitched voice that’s instantly indentifiable when he raps. Don’t confuse high-pitched for feminine though, it’s just not as deep as Dr. Dre or as thick as Ice Cube.

There were some who didn’t like Eazy-E for this reason, but with a slew of ghostwriters like D.O.C. and MC ren working behind the scenes his lyrics were always on point. Sometimes hardcore, sometimes comical, sometimes a funky mixture of the two, the combination of these lyrics with his vocal pitch and unique flow made songs like the title track “Eazy-Duz-It” into hits:

“Now I’ma break it down just to tell a little story
Straight out the box, from the gangsta category
About a sucker, a sucker motherfucker
He’s addicted, he’s a smoker, but in Compton called a clucker
He used to have a house car and golden rings
But the cooky cooky crack took all those things
He must of been starvin cause he broke in my house
Caught the nigga on the street and straight took his ass out
Now I’m wanted for a murder that I had to commit
Yeah, I went to jail, but that wasn’t shit…”

E’s ability to bust rhymes like this was was often punctuated by a surreal and violent twist. The up and down of his intonations and the way he paused for effect left you hanging on the edge of your seat, waiting for the dramatic conclusion to E’s story:

“Got to the station about a quarter of nine
Called my bitch to get me out cause I was down for mine
The bitch was a trip, cold hung up the phone
Now my only phone call was in the gankin zone
All the shit I did for her, like keepin her rich
I swear when I get out I’m gonna kill the bitch
Well by now you can guess that it was just my luck
The bailiff of the station was a neighborhood cluck
I looked him straight in the eye, and said – ‘Whassup?’
And said, ‘Let’s make a deal, you know I’ll do you up.’
Now back on the streets and my records are clean
I creeped on my bitch wit my uzi machine
Went to the house and kicked down the do’
Unloaded like hell and cold smoked the ho!”

Nobody ever accused N.W.A. of being the nicest cats on the block, but that was part and parcel of their popularity; especially in suburban neighborhoods where rebellious teenagers adopted the street attitude of rappers like Eazy-E as their own. Whether it was to gain an identity, shock their conservative parents or both, the ultimate result was that albums like “Eazy-Duz-It” were a runaway success. And you certainly can’t argue with his consistancy on this album – it’s an over-the-top unabashed celebration of hedonism in the same vein as the Beastie Boys. “Nobody Move” epitomizes this attitude perfectly, but in typical Eazy-E fashion it has a comical and violent twist:

“I’m in a bank, and it’s a little bit funny
Takin all you stupid motherfuckers’ money
Peepin at a bitch cause my dick’s on hard
Laughin at the dumb ass security guard
who’s tied up for the moment, not sayin a word
I should have knew it before, the motherfucker’s a nerd
But back to the bitches I’m peepin
And then, untied the hoe, so I can start creepin
Took her to the backroom, about to jack
Cold trailed the bitch, with a gun in the back
I said: “Lay down, and unbutton your bra!”
There was the biggest titties that a nigga ever saw!
I said: “Damn,” then the air got thinner
Only thought in my mind, was goin up in her
The suspense was makin me sick
She took her panties down and the bitch had a dick!!
I said: “Damn”, dropped the gat from my hand
[“What I thought was a bitch, was nothin but a man”]
Put the gat to his legs, all the way up his skirt
because this is one faggot that I had to hurt”

Not surprisingly, Eazy-E reveled in his ability to offend everyone from GLAAD to NOW. For those who are easily made queasy, Eric Wright’s is not the album they should hear. As an ex-drug dealer and record label executive, E saw the similarities between the rap game and the crack game – it’s all about the hustle. With Dre’s beats and E’s surreal over-the-top rhymes, the combination was then and still today entertaining. This remastered CD doesn’t end where the original vinyl and tapes did though – the new disc includes E’s entire EP “5150 – Home 4 the Sick.” This part of E’s career came after Dr. Dre had left both N.W.A. and Ruthless Records, and it does show a bit in the quality of “Only If You Want It.” Some may find the song “Neighborhood Sniper” eeriely prescient though, given the current state of paranoia rampant in Washington D.C. area. The Bobcat produced “Niggaz My Height Don’t Fight” still stands as an Eric Wright classic to this day:

“So you can kiss my black asssssss
Fuck the White House; it ain’t my house
So you can burn the motherfucker down for all I care
Cause t-shirts and khakis is all I wear
[…]
Because the President, never sent
One damn dime to my residence
I’m goin crazy like 1980
I need my ends, fuck you, pay me!”

Trust Wright to be blunt. The best part of all may be “Merry Muthafuckin’ Xmas,” a song which pokes holes in the often fake cheer and commercialism of the holiday season. How can you not laugh and sing along when E turns “Jingle Bells” into an anthem of getting head? With the profesionally cleaned up tracks of his solo debut and the semi-obscure “5150” EP included as a bonus, “Eazy-Duz-It” is a “Back to the Lab”album which may be over a decade old but is all brand new for 2002. If you don’t already own a misogynistic, violent, hardcore ass hip-hop album that takes no shit and talks a lot of it over fat beats, this would certainly be a good place to start. As the immortal words from Dr. Dre’s “The Chronic” so aptly put it, this should be played at high volume; preferably, in a residential area.