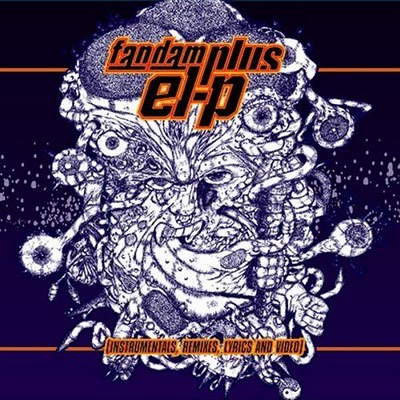 Released as a companion album to El-P’s critically lauded and sonically obtuse solo album “Fantastic Damage,” the double disc “FanDam Plus” comes packed with extras. So many extras, everyone from recent converts to older Company Flow fans will be happier than Method Man at a NORML meeting.

For a start, the first disc comes chock full of instrumentals from the solo album. El-P has received as much praise for his beats behind the boards as he has for his densely packed verbals in front of the mic, so stripping them down to their own presentation is a welcomed idea. It’s amazing how few great albums are presented in this fashion except as vinyl only releases to DJ’s, but this disc will take it’s rightful place in my collection next to “ATLiens” and “2001.” If you’re looking for the perfect beat, you might find a few here. “Deep Space 9mm” builds on a solid foundation of snares, cymbals and hi-hats to an explosive climax, while the dark brooding hip-hop of “Tuned Mass Damper” is just beautiful sans lyrical interruption. “DeLorean” sounds as shiny and silver as it’s namesake, while “Truancy” could be mistaken for a Linkin Park track due to it’s crunchy riffs (and yes that’s meant as a compliment). It’s amazing how much “Lazerfaces’ Warning” sounds like a lost Company Flow song stripped down to it’s bare elements, and how good these beats are in general.

The second disc may whet the fans appetites more though. It contains the original version of “Squeegee Man Shooting,” an RJD2 remix of “Lazerfaces’ Warning” which samples cleverly from Nas among others, and an all-star posse version of “Dead Disnee” renamed “Dead Weathermen” for obvious reasons. If you slap the CD in a PC, you’ll get tons of enhanced features including a “Deep Space 9mm” video and a complete selection of the lyrics from “Fantastic Damage” as transcribed by El-P himself. If you don’t trust the versions on OHHLA.com (and I’ll be the first to admit they’re not always accurate) then this is the place to go. It’s a shame that more rappers don’t do this, especially the ones who like to twist complex concepts and esoteric references into their rhymes to the degree Producto does.

One minor note of complaint comes in the form of the packaging, which slips the double disc into a paper wrapped jacket that contains the tracklisting. If you lose or misplace this flimsy outside, there’s no liner notes on the CD or reprint of the songs enclosed on the inset trays or spine anywhere. In fact the entire thing gem case remarkably absent of any identifying marks whatsoever, which may be El-P’s idea of being progressive and trendy but really SUCKS when you’re trying to find a place for it in your collection and be able to dig it out again later. Hopefully you’ll remember the blood red color and the yellow blotches sprinkled on it like an avant garde painting, because that’s all you’ll have to go on. Still for those who liked “Fantastic Damage” this companion volume is undoubtedly a good purchase; anybody who didn’t will (ironically enough) be non-plussed.