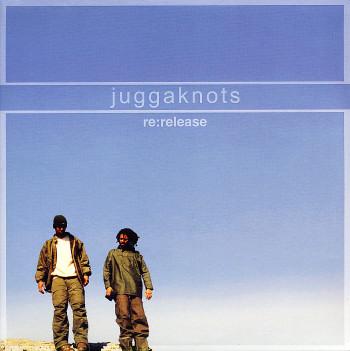 Whispered in the dark corners of underground cyphers. Traded in bootleg tapes from backpack to backpack. A lucky few might have copped the vinyl when Bobbito’s own Fondle ‘Em Records had it in print, the rest who knew about it had to try (and fail) to cop a copy on eBay. Simply put, “Clear Blue Skies” by the Juggaknots is one of THOSE albums. Even if you delved into hip-hop on a level deeper than Master P, Snoop Dogg and P. Diddy, you might have missed out on this obscure 1996 release completely. If you’re lucky you might have caught group member Breezly Brewin’s raps on the cinematic Prince Paul album “A Prince Among Thieves,” which received a wider release in 1999 on Tommy Boy Records but seems to be largely as obscure as his first go around.

Third time’s the charm for Brewin and his partner Buddy Slim; who go back to the roots of “Clear Blue Skies” but present it in a whole new light with re-mastered music and bonus tracks – eleven more in fact. The title track is a good place to start though, especially for those used to rap songs rooted in the details of drug sales and platinum chains. Those songs are not without merit, but other rappers with a different kind of story to tell are often looked over or pushed out of the limelight because they don’t fit in – not unlike the protagonist of Brewin’s story. He’s a white kid who fell in love with a black girl, but his disapproving and racist father ain’t having it. Slim plays the father, and Brewin plays the son:

“[The Brewin] Well I’ll be damned, cause it seems that I’m the last to know
My father’s a bigot, my girl’s black, he can’t dig it; so she has to go

[Buddy Slim] Now you’re judgin me kid, but do you know me
[The Brewin] But it seems to me like even David Duke could be your homey
[Buddy Slim] Now you know I ain’t no racist, but they place us in a terrible predicament
They takin over the block, and damn it son, I’m sick of it

[The Brewin] But when you see the neighbors you say — hi, how you doin?
[Buddy Slim] Still I think of how the value of my property’s been ruined”

It probably doesn’t seem so profound now in 2003, but surely it was a revelation to those first listeners to hear an underground rapper not only empathizing with but PORTRAYING a non-traditional participant in urban culture and showing his struggle for acceptance. Juggaknots whole steelo was to break trends though, and “Loosifa” exemplifies this. It’s another narrative tale, this one about a hard luck kid who does stick-ups, but instead of demonizing him OR glorifying him it takes a different twist — he ends up working in a maternity ward to pay bills:

“His only solitude was wifey, word to life G, it seemed
they was together forever, and now the womb had been seeded
He needed a job and the robbin wouldn’t do it
He wasn’t tryin to go out like the corner strapped
Her mother was a nurse, her purse was chubby
From the hospital she found Smokey some work and shit was lovely
With some cream in here, feed a patient there, he had loot
And not a nigga on the street would have to get that pocked tapped
He’s workin in maternity and earnin
Seein much about the infant children, to be skilled in fatherhood
Stealin baby’s stuff home for self
And he didn’t have to pull the Mac-20 off the shelf”

The twisted part is that the brother who once would have taken a life without blinking an eye suddenly becomes a staunch pro-life advocate, to an almost chilling and venemous degree:

“In maternity, Smokey saw stuff, raw stuff
Make-you-drop-your-drawers-stuff, hospitals get sorta wild
He saw some babies shaken, awakin if they were fortunate
His soul was scorchin it would have thinkin of his child
Later there would be no ‘Honey, I’m home’
Strictly, ‘Woman if you jeapordize my seed dead up I’ll leave you wet up’
On the block, a flock of zombies entranced
By the peddlers of temporary ghetto heaven had him fed up
His job was gettin hard to fuck with
They had even had him stuck with the disposal of the stillborn”

Then in the third verse, unable to cope with the sheer drama of his work and a violence far worse than any he knew on the streets, he seeks relief in pharmacological ways. This leads to a shocking ending, but rather than spoil it for you I’d encourage you to get this CD and hear this morose but moving track for yourself. The irony is that the re-release of “Clear Blue Skies” is the kind of album that will haunt you like the protagonist from “Loosifa” with mental images you can’t shake from your head. Brewin and Slim are both one of those cats who can’t be molded like clay into a familiar shape that average overground rap listeners would understand. They tend to spill all over the beats, flowing in a method that seems almost devoid of rhythm but then comes back at the 4 or on the 1 to give the lyrics form to go with their function. And their function varies — braggadocious on “Epiphany”, thought provoking on “Romper Room,” playfully horny on the bass booming “Sex Type Thang” and strictly for cooling out and relaxin’ on “Luvamaxin.”

On a personal note if I may, I’ve noticed that some faithful readers of RapReviews.com seem to think that I’m overly generous in my praise. One noted that my scores for albums often seem to fall between 7 and 10. Perhaps that’s true; then again in most cases I don’t go out of my way to listen to things that I would hate. I’m sure that someone used to unchallenging rap songs, conventional flows and beats that shamelessly recycle funk classics would probably hate “Clear Blue Skies” simply because it doesn’t fit their narrow definition of what rap should be. It’s not up to them to decide what it is or isn’t though, and neither is it up to me. What I say in my reviews is merely my educated opinion of what I think is dope or whack after over 15+ years of listening to rap records. In that time it would have been far too easy for me to give up on hip-hop during those periods when uninspired rappers mimicked each other and all the shit on the radio sounded the same, but instead it forced me to dig a little deeper to find musical bliss. Records like “Clear Blue Skies” are what help form a perfect balance for me. They give me the ability to appreciate simplistic fun-loving rap for the party anthems they are without expecting something more profound, and then when I need it get a dosage of something that breaks the mold instead of fitting into it. Some people can eat candy all the time, but for those who enjoy a little bitter along with the sweet the Juggaknots are good for your mental dental hygeine. If you think the score is too high or you looked at it without bothering to read a word I said, here’s some floss for your cavities.