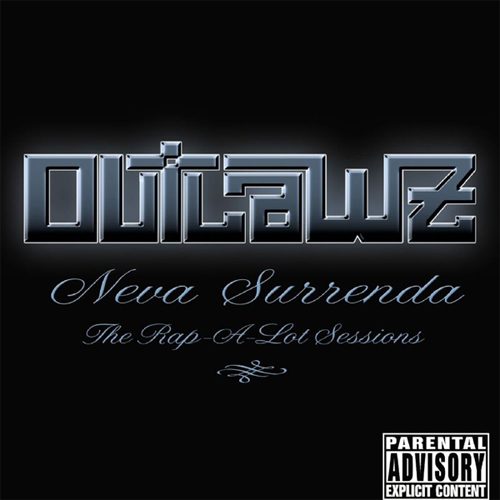 As if there wasn’t already enough Tupac Shakur raps getting released years after they were originally recorded, now even the Outlawz come out with previously unreleased material. If there’s one thing the Outlawz inherited from their mentor, it’s his work ethic. Driven by the same nomadic spirit, they have collaborated with countless rap artists across the map. The songs gathered on this album, however, mark a particular period of their career: “Neva Surrenda” was ready to be released around late ’99, early ’00.

When the Outlawz initially signed to Death Row, they refused to give up their publishing rights to Suge Knight. It soon became clear that the group would carry on the legacy of Makaveli elsewhere. After the release of “Still I Rise”, a project Death Row had been reluctant to put out and promote despite the success of the first posthumous Pac album “R U Still Down? (Remember Me)”, the group and the label parted ways. Before making their proper debut with “Ride Wit Us or Collide Wit Us” in 2000, they did a short stint at Houston’s Rap-A-Lot Records, where they recorded “Neva Surrenda”, which finally saw the light of day a few months ago.

Some of its tracks have already appeared on their various solo and side projects. “Gatz Up” was on Noble’s album, “What Side U On?” found inclusion on the Jersey Mob mixtape, “Desperation” could be found on Kastro & E.D.I.’s album. Considering that “Neva Surrenda” will hardly travel beyond the hardcore Outlawz fanbase (there’s no Tupac on it, there will probably no singles and videos), this might not be that big of a handicap. But who knows, maybe this CD has still something to offer to the casual consumer.

The album starts off with a recommendation from a very prominent figure. Geronimo ji Jaga (formerly Geronimo Pratt), the Black Panther leader who was released from prison in 1997 after being wrongfully incarcerated for over 25 years, tells us that no other group embodies Tupac’s spirit like the Outlawz. This is indeed something that has been discussed, and if anything, we can agree that we can’t lump the Outlawz together with all the Tupac-worshippping wanna-be’s that have trampled over his grave. In other words, if you expect the Outlawz to follow Tupac’s book of thug poetry chapter and verse, that just won’t happen. While none of them comes even remotely close to the accomplished writer and rapper Pac was, they all have found ways to somehow keep his spirit alive in their rhymes. As it turns out, “Neva Surrenda” may just be the most consistent album they have to their credit so far.

Out of the four, Young Noble is probably the most prolific, and the opener “Gatz Up” shows why:

“Ain’t fuckin’ up, even though we hate this world
Young niggas rise up, we can take this world
back, cause it belong to us, stay black
And all the other minorities that’s under attack
fuck the government, cause they don’t give a fuck about rap
they sellin’ the most crack in my hood, in fact
they want us coked up, doped up, drunk as fuck
so we won’t have no clue what’s goin’ on around us
Get down with us, if you remember all the lynchin’
Muthafuck the cops, includin’ Sean Nixon
We schoolin’ y’all, listen, my word is bond
One love to Geronimo, the war’s still on”

Before and after this segment, you will hear E.D.I. and Napoleon talk about what they plan to do to their enemies. Now they are either speaking in some coded language where the n-word really stands for the representatives of the same system Geronimo and his movement used to fight back in the ’60s, or they haven’t really understood the concept of fighting the power. Every other line warns some ‘nigga’ of what they got in store for him. Contradictions like these are common on rap records, but it feels particularly wrong on an album that is called “Neva Surrenda” and begins and ends with a Black Panther activist talking to today’s generation.

The outro was later used on “Ride Wit Us or Collide Wit Us” (the “Geronimo Ji Jaga” interlude), but here it is put to better use, like some sort of illuminating final statement, as he explains the origins of the term ‘ride or die’. Sadly, the Outlawz themselves don’t seem to realize that their version of ‘ride or die’, as expressed in the term ‘ride with us or collide with us’ is a perverse twist on the original meaning of the saying. But if rap has taught you that ‘ride or die’ means that whoever is not your friend is your enemy, then a song like “Gatz Up” won’t seem so strange after all. Ultimately, we have to realize that a rap record is not something to live and die by. An artist is not a political activist, he is much more free in his thoughts and actions. And so eventually we learn to live with all these contradictions we encounter in hip-hop and take every song as it comes.

Out of 14 songs, “Gatz Up” is the most animated track. Since breath control is not their biggest fortÃ©, E.D.I., Young Noble and Napoleon handle the stutter-step of Mr. Lee’s drum programming surprisingly well. Lee then does his best Mannie Fresh impression on “What Side U On?” but gets stuck in repeat mode for six minutes straight. During which you hear six rappers, three Outlawz and three Hot Boyz, engage in verbal violence of the worst kind. Alas, the rap fan in me is hypnotized by the incessant tough talk. The next collaboration with a South Coast artist is just around the corner, and this time it’s none other than Geto Boy Willie D. However, despite Mike Dean on the track, “Move Somethin'” is only noteworthy because it marks the first appearance of the notoriously underserved Kastro.

“Everything Is Alright” would have made for a good single, as it is reminiscent of “Baby Don’t Cry” and the more mellow cuts from “Me Against the World” and “All Eyez On Me”. The optimistic song (E.D.I.: “There’s a silver lining surrounding every cloudy day”) applies the originally spiritual lyrics “Everything is gonna be alright… / He’s coming back / like He said He would / for the true and good” to everyone from the Lord to the Outlawz to Tupac Shakur. Noble might hit the nail harder on the head than he intends to when he says:

“Pac, why you leave us? This world don’t need us
But when we tell ’em you here they don’t believe us
My Black Jesus, the only one that tried to free us
Nobody cared but you took time to teach us”

Today, the Outlawz themselves have evolved to the position of teachers, but something prevents them from realizing the full range of responsibility that comes with the job. From this point of view, the Outlawz definitely ARE Tupac’s seeds, and like him they represent the desperate that sometimes see no other choice but to resort to desperate measures. As Noble puts it in “Stick 2 the Plan”: “The street breed vultures / The Outlawz ain’t no group, we a culture.”

For the second half of “Neva Surrenda”, the Lawz take a more responsible approach, reflecting upon the hard times they went through. “Us” talks about loyalty and how important it is for those who only have themselves to stick together. The Outlawz have some of their strongest moments when their rhymes reach a personal level. Like when Napoleon opens his verse with:

“I been wakin’ up, stressin’ lately
Sheets wet from the sweat and my hands shaky
I got a kid on the way, I’m kinda nervous
I did some dirt in my life, hope it don’t curse it”

Appropriately, “Us” is followed by “Black Diamond”, a song exclusively dedicated to children. Mr. Lee even comes up with a beat that sounds like it’s designed just for kids under the age of 10. Here’s a hint: Why not make a whole album for kids? “Why?”, in return, deals with juveniles and their confusion in a world that won’t give them no chance. All four members talk about their personal experience, while a singer reflects on what they report:

Having let all their guards down, even “Pleasure of Sin” (featuring Yukmouth and Big Syke) dwells much longer on the bitter than the sweet. If they really pull themselves together, the Outlawz have always been able to come up with dope verses. Kastro:

“My whole life is like a barrel of sin
The shit that I could teach ya won’t no preacher recommend
And when I have fun is when I’m gone off Henn’
pass out, wake up and do the same again
Drugs and thugs go together like hands and gloves
The money root of evil, still that’s all we love
and that’s wrong, but, we like it that way
and we won’t never get along with each other, no way
I fuck a bitch, nut and cut, and fuck a new slut
Pussy and paper is all the fuck my people used to
Cause sinnin’ll soup ya, cause us all to fail
To a cell smellin’ stale, we need some heaven in hell
Yeah, and it’s like that, until God take our life back
we head down the wrong path fast off the right track
with knife in our backs, what a position we in
Sinnin’, grinnin’, chasin’ women, just the pleasure of sin”

The strong showing continues with an outstanding performance by E.D.I. on “Desperation” on a Mike Dean track that would be worthy of any Scarface album. “Blessings” suffers from a very average beat, but Mr. Lee makes up for it with the closing “Lost and Turned Out”, an airy track that comments sensitively on the sad stories told.

In retrospect, “Neva Surrenda” would have probably been a better offering than “Ride Wit Us or Collide Wit Us”. For the simple fact alone that it reaches a little deeper. And even though Mr. Lee and Mike Dean don’t shine as much as they have on other occasions, the beats are of a higher quality as well.