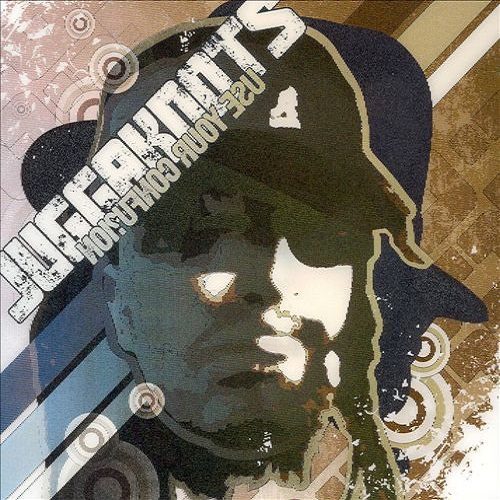 Out of hibernation, up from the confines, poised to finally invade headphone receivers once more, the fabled Juggaknots fam return to hip-hop, barely in time to foreclose retirement talks. Their hiatus has been a painful one for many; it’s been ten years since the “release” of their classic “Clear Blue Skies” LP, a must-have that wasn’t granted legit pressing until 2003. Their time away from music has increased their stature to something just short of legendary, beyond the recognition that surely follows any masterful debut. A Juggaknots sighting throughout the years has always created buzz; any sporadic guest contribution raising ears; to the point that the brothers became hip-hop’s equivalent to bigfoot.

Front man Breezly Brewin would look the part of a disinterested snob, a begrudging artist too disillusioned with rap to continue with what everyone already knows he can do. He is an exceptionally gifted emcee; a rare double-edge of wit and style; with a flow so effortless he’s received his own share of criticism for it. Anything he’s ever done in rap has been of importance, from his guest verse on “Funcrusher Plus” to his appearance on Lyricist’s Lounge, and he flexes such on the track “Namesake.” Indeed, he force-feeds a hefty resume, but that isn’t what the long-awaited “Use Your Confusion” is all about. It’s about what the Juggaknots have struggled with in the last ten years, from cash flow to unstable expectations, to the bitter tinge of a 30th birthday.

Things acquire new meanings with age, and much of “Confusion’s” charm revolves around such realizations. These would include Breeze’s new interpretations of a smile, genuine or plastic (“Smile”), the shameful obligation of lying (“Liar, Liar,” quoting Wordsworth: “The truth? Easier leavin’ it out, like when you “five minutes away” but you just leavin your house.”), and the oddity that is aging (“30 Something”). “Leon Phelps,” an homage to the incessantly randy SNL character, is really the only track that goes against this flow and still works. Breeze approaches his verses like he was 21 again, all in the audacious pursuit of some tail. “You want penis a lotta? (eww!) I meant pina colada!” For an instant he’s a comedian, but happy vibes are otherwise scattered few and far between. Watch as Breeze reinvents the routine on-the-come-up outline with a grim football metaphor on “Move The Chains”: “Ayo the kids tryin,’ surrounded by wild factors, like on the gridiron, surrounded by linebackers.” The album reaches an overcast high point with “30 Something,” a dispirited Breeze resolving to eat veggies, watch his cholesterol, and yes, get his milf on. The unlikelihood of him making good on any of this is the song’s draw, and with Sadat X guest starring over Oh No’s descending keys, it makes for the LP’s highlight.

The recent addition of lil’ sis Queen Herawin for “Use Your Confusion” will get a mixed response from fans. She’s pretty tight; you can tell she’s spent plenty of time honing skills around broheim; but with a style as similar and a pitch as polar to that of Breeze, she almost feels redundant. Either that, or she’s just enough unblushing incentive to start dubbing the Knots the “Jackson 5 of hip-hop.” She doesn’t necessarily hurt “Use Your Confusion,” in fact she’s quite impressive at given times, her solo “Daddy’s Little Girl” in particular, but I don’t find her voice complementary to Breeze’s coarse-but-oh-so-smoove flow.

The beats and rhymes throughout “Use Your Confusion” are mechanically flawless; a testament to Breeze’s shrewd hip-hop know-how. The drums are dusty, the cuts are fantastic. But every song shares virtually identical tempo, and although the Brewin’s samples are all good, he doesn’t dig up enough to keep the breaks very interesting (you can catch the backdrop for “Namesake” in day spas). And while Oh No lays claim to some of the LP’s strongest breaks, his contribution of “Vows” grows moss before the 1:00 mark, and simply does not hold a place among the Jackson family catalog. Fortunately enough, Slick Rick’s guest verse could have rocked a bongo and tambourine. Breeze himself is inconsistent in providing head-nodders, really only winning you over on the Madlib-esque “Movin’ the Chains” and the choppy bounce of “Liar, Liar,” while J-Zone is average at best on “Crazy 8’s.”

For some fans, impossible expectations will be the certain fate of this long overdue sophomore endeavor. Their time away from the game has surely hurt the Juggaknots’ face, developing anticipation too fantastic to catch up with. Your outlook going into “Use Your Confusion” will no doubt change the experience, a dilemma ever plaguing all notable successors. Is it “It Was Written?” No, but it sure ain’t “Late Registration,” either.