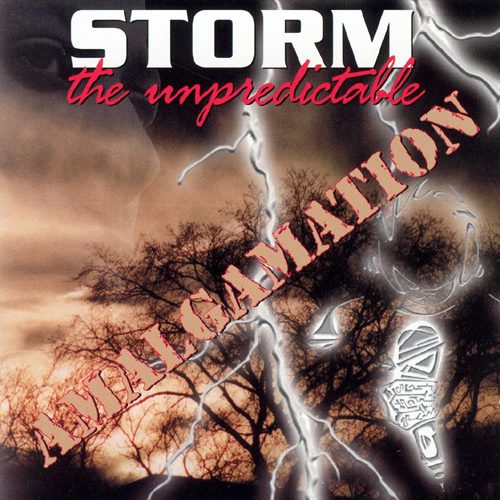 Hip-Hop has been a lifelong passion for Dwayne Henry. Aspiring rappers all know the drill – staying up nights writing rhymes on notepads, typewriters and sometimes even personal computers just to get the words out; then rocking the wee hours of studio sessions whenever you can scrape together the dough to make it all happen. Henry was pulling double duty though. While y’all were dropping science, Henry picked it up and walked away with a degree in biotechnology from the Rochester Institute of Technology.

You might think a man in his 30’s with a college degree would be thinking more about rocking a 9 to 5 than rocking mics, but the aptly named Storm the Unpredictable refuses to play the role or give up the art he loves. Out the trunk releases have finally given way to the full length album “Amalgamation,” an album that like the term it’s named after merges disparate elements together into a single body. Storm is nothing if not opinionated, as “I Hate When” goes to show:

“I HATE WHEN – somethin goes down on the news
And they find the ghettoest black person to give they views
I HATE WHEN – they like, ‘What had happened was this;
Re-Re she, she came out, and Kiki got pissed’
I HATE WHEN – artist has a single that’s hot
But when you go and buy that album, that album’s like NOT
I HATE WHEN – they claim Sisqo is hip-hop
And they say Lil’ Zane be forever rockin the spot
I HATE WHEN – the IRS hounds you for your dough
But when they make a mistake will you get ya dough quick? NO
I HATE WHEN – I hit the ATM to withdraw funds
The receipt says, negative thirty – you owe ME some!”

Some of Storm’s best known songs to date are included on this album, such as indie single “Stop Lyin'” featuring Priest da Nomad. This joint, he takes the art of talking trash about living large to comedic excess:

“I used to chill with Toni Braxton and Lela Rochon
Nia Long was even beggin – Storm, can we get it on?
F’real, but then I had to cut off our relations
Cause they couldn’t handle Storm cold tourin the whole nation
Got Swiss bank accounts, I can’t mention amounts
But I could write you all blank checks and they wouldn’t even bounce
Plus let me announce I used to live in the ghetto
on the corner so wracked that all the whites and blacks
go home, to my mansion with my bassment full of guns
Plus I’m half Puerto Rican, ask Fat Joe and Big Pun!
Premier gave me a beat, it was hotter than the sun
Guess the name of my Uncle yo (who?) DJ Run!”

Kokayl’s whimsical beat is a perfect match for a guy who even claims to “ghostwrite for Jay-Z.” He also laces the witty “Get Your Weight Up (Big Girl Anthem)” where Storm disses on Ally McBeal wannabeez who won’t even eat two crackers a meal. “Why settle for a dimepiece, when you can get yourself a quarter or a dollar? BIG GIRL HOLLA!” Lonnie B and Danja Mowf cameo on the latter’s beat for “Suplex,” and like the title the tag team lyrical attack is a BODY SLAM of dope hip-hop. Elsewhere you’ll hear dope tracks by DJ O’Salaam on tracks like “We Ain’t Like That” and and DJ Symphoni on the old school inspired song “The One That You Love.” They may not be the most well known names in underground rap, but they hold it down like pros with songs like “Up in You” and “Darker the Berry.” At times though, you may actually wish he wasn’t lying about getting beats from DJ Premier. Storm is so verbal as an MC that he really needs the next level on production to break into rap’s mainstream. His voice also takes some adjusting to – it’s not high pitched, but it’s far from the deep tones of a Dr. Dre. Still in the always crowded realm of underground rap, Storm the Unpredictable’s “Amalgamation” stands out due to the fact this scientist has skills on the mic like he does in the lab, and vice versa.