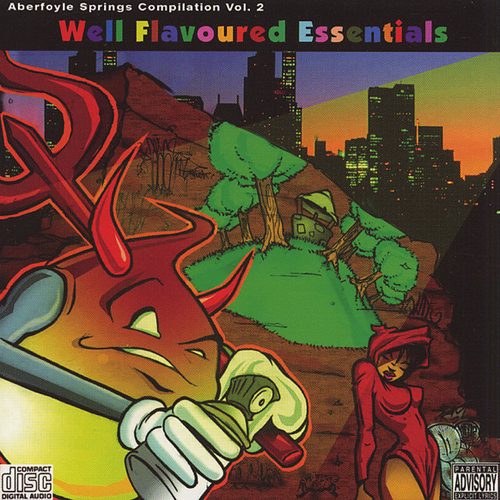 We here at RapReviews are an enthusiastic bunch. We love hip-hop. We love good hip-hop even more. And we don’t necessarily hate bad hip-hop. This mindframe leads us to regularly award hip-hop that we think excels at being good with the ‘5 mics’-equalling rating of 10 TOTAL Vibes. In April 2002, writer Jayson Young crowned this CD’s predecessor with the top laurels. Let me sum up his delight with a succint but rather serious statement he made: “The Aberfoyle Springs Compilation is everything you could want from a rap CD.” That’s great. But do we really all expect the same things from a rap CD? My fellow reviewer left a hint as to what we all ultimately expect from a piece of music: “You could NOT ask for anything more out of this album.” Certainly you can always ask for more, the question is if you want to. You can add course after course to a meal, but there’s going to be a point when you’re full. Not crammed, but proverbially fulfilled. It’s that rare feeling of holding a great album in your hands, one that just wouldn’t be as great if anything was added or subtracted.

But even if you encounter a record you couldn’t ask more of, there will be people who are not going to ‘feel it’. Trying to find a consensus on hip-hop hasn’t been easy lately. What was the last longplayer that received almost unanimous praise? Jay-Z’s “The Blueprint” comes to mind, maybe OutKast’s “Stankonia”, Eminem’s “The Marshall Mathers LP” or Dr. Dre’s “The Chronic 2001”, but the regional and cultural divide between members of the hip-hop audience keeps getting wider, resulting in less and less albums that everybody can agree upon. Where are the Y2K versions of “Ready to Die”, “Doggy Style”, “Illmatic”, “The Infamous” and “Only Built For Cuban Linx…”? You’d be a fool to believe that it’s ever going to be like in the ’80s again, when every single release blew your mind. By now, there are too many splinter groups in hip-hop for us to ever come together as one again. Zealots are being born and bred, accepting only music that complies with their narrow-minded notion of how it should be done. Hip-hoppers are like the citizens of Biblical Babel, having built something so megalomaniacal it just had to crash and now we’re scattered all over the place speaking different languages.

If the future holds another hip-hop album for us that we all love, chances are it’s not going to be a compilation. Theoretically, the more personel, the more people can relate, but quite frankly no compilation has ever reached official classic status, one or two soundtracks coming close. And so “Well Flavoured Essentials” takes its seat among a plethora of similar releases, with some tracks standing out, some falling behind, and others calling neither negative nor positive attention to themselves.

In mostly relaxed surroundings and demeanor, none of the participants exactly aim to blow your mind, with the possible exception of Josh Martinez, whose “Rip Rap” is a restless but ulimately refreshing tour de force that puts your attention span to the test. Over a drum-driven track mellowed out by some ’60s-styled spaced out guitars, Martinez reflects on his journey through rap in what turn out to be fairly simple terms, once you’re in tune with his quicksilver flow. As we stay up in Canada, we meet some more of their typical rappers slash spoken word poets. Sixtoo is one of them. His contribution, “Death Match”, is the usual collage of personal life references and more metaphorical imagery. If the delivery wasn’t so detached, if the production would at least try to connect with the listener, Sixtoo’s writing might become relevant, but since that’s not the case “Death Match” remains a warning for poetically inclined wanna-be vocalists.

Another artist in that mold is Kunga219, working double shifts here, once in conjuction with producer Moves (“Blew Clouds”), once with his partner from The Goods, Gordski (“Mediocre Man”). “The point of what I’m sayin’ is / if you’re smoked out at your home just playin’ this / there’s a day to miss / so get up, get out and go do somethin’ more active,” he urges us in “Blew Clouds”, but judging from the hazy track and him checking into hibernation at the end of the song, Kunga219 doesn’t seem so motivated himself. The second offering is interesting in parts, but overall devoid of any surprising features. Unfortunately, this is one of the persistent and most fundamental flaws of this kind of music, and Kunga219 proves critics right not once but twice.

Still north of the border, but more on the traditional hip-hop side is “Restless”, the mixed duet of Eternia and Rabel. The drumbeat alone would normally prompt me to skip this one. But even feeling obliged to deal with it, it’s hard to see past the stiff, overly serious flows of the rappers. Solid writing can only be the base of a good hip-hop song, the rest has to happen on a musical level. Something that is ensured on Jeff Spec’s “You Don’t Wanna Believe” with its soulful uptempo thump. Dito for his crew’s City Planners’ “Uh Huh”, a simple little headnod type beat. For a final dose of Canadian hip-hop, check “The Pheonix” produced by Moves featuring Governor Bolts, Stubs, Kaboom and three widely differing performances.

This compilation’s biggest asset may be its regional diversity. DC’s Storm the Unpredictable examines some of the contradictions hip-hop is known to produce over a higly melodical track courtesy of DJ Symphoni. Portland-based Braille surprises with the conceptual “Nobody”, Minnesota’s Kanser, Twisted Linguistics and Felix display their “Collective Egos”, Celph Titled brings along Tino Vega from Tampa to help out Apathy on “Guerilla Orchestra” (from last year’s “Put Ya Dukes Up” 12″), Chicago’s Lord 360, Chapter, and Drub officially close the Slaughter House V crew chapter going down in a “Spiral of Silence”. Even New York is in the house, with the Atoms Family and their surreal Jeopardy-inspired “Famous Names for $200” and the equally enigmatic “Tourist on Mars” by Brooklyn’s LoDeck.

Not sure if you have noticed it, but battle lyrics are on retreat in any field of hip-hop, and with good reason. Look no further than the stale “Who’s Fuckin’ Around (Remix)” by K-Skills and Celph Titled. Folks like these need to either improve heavily at what they do or look into other topics. They could learn a lot from Rok One and Sev Statik. Rok’s “Southern Discomfort” is a detailed emotional journey of a man struggling to let go of his ex, while Sev’s “Wasted Tears” speaks to young’uns, warning them of the wrong path. At a slow, thoughtful pace, interrupted only by a chipmunked-out soul sample, Sev lives up to his role as “a panhandler when I’m askin’ this world for change / I’m holdin’ down 2 cents, with that I’m tryin’ to save / for someone else’s days of rain.”

“Well Flavoured Essentials” may ultimately lack truly top-notch MC’s, but with rappers like Rok One, Sev Statik or even Braille and Josh Martinez, there’s particular talent here not many compilations can boast. Never mind if this second installment of the Aberfoyle series fails to impress the way the first did, with exclusives by Count Bass D (“Potholders”), Atoms Fam, Kunga219 and Sixtoo, people are going to check for this anyway. If you’re not at all familiar with the names mentioned in this review, join us in our effort to bridge hip-hop’s great divide. The “Aberfoyle Springs Compilation Vol. 2: Well Flavoured Essentials” is as good a place to start as any.