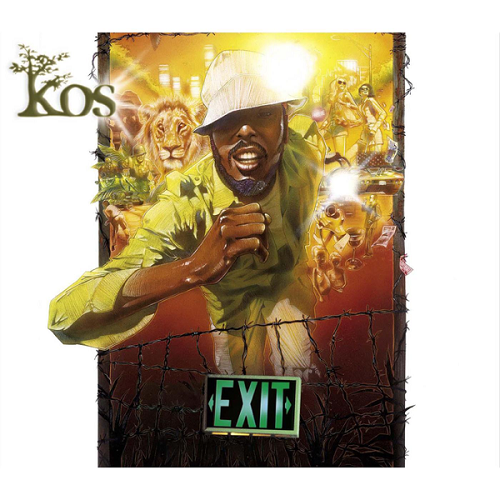 It’s a dark world these days. Cold, dreary, scary and even frightening. Hatred and intolerance are reaching all time highs, nations are arming themselves with weapons of mutually assured mass destruction, and the U.S.A. is fighting a war to liberate Iraq that even with the best of intentions in mind may inspire more as opposed to less global terrorism. Some might wonder if such a world is worth living in any more, or raising your children in, or even HAVING children to raise. What hope is there for such a vile, repugnant, malicious and hating animal such as man?

At the eye of the storm though, there is always a calm. k-os knows that music can be that center that reminds of days before the rain and gives us hope to reach the “Exit” ahead. The self-produced and written album speaks of a man who is part rapper, part poet, part singer and part philosopher all rolled into one. When you hear the lushly produced “Call Me,” you’ll know no numbers need to be dialed save for track three on your CD player to hear and feel that soothing calm:

“Call me (call me) if you wanna go
We don’t have to stay, in a world that is slipping away
Face the world (uh) my father told me
that life is mystical, beautiful blisstiful
Now in troubled times, I find soul
in reaching what I’m seeking seems so far
Face the world (uh) my mother told me
that life’s me-chanical, so tyranni-cal
It blows my mind, just what will be
reaping, many weaping, so help us God
Never knew that I, could be looking why
are so many breaking, making castles of sand
Every man, wanna be the one, wanna be the one
to be, King for a day but it’s, slipping away
And I’m happy, most melodical things I sing
to release the pain, and cease the rain
In my brainstorm, I can’t hide, from inside
Escape to the outside, from the mountain flying away”

Even at nearly four minutes long, this song seems far too short. You could swim in this arrangement of strings, guitars, drums and bass for days on end. When k-os writes in the liner notes that this album took him 29 years to make, it’s easy to see his age and maturity reflected in the words he writes and the melodies he crafts. k-os is a mixture of the humanistic and realistic vision of Speech with the street smarts and intelligence of KRS-One, blended into a uniquely Canadian whole. Canada? Like great hip-hop artists from the Great White North before him such as Maestro Fresh Wes, Choclair and The Rascalz, k-os seems to be getting overlooked by people who make the unfair bigoted assumptions about the music. This too shall wiped away by the winds of change swirling around k-os, and “Heaven Only Knows” what those left behind will find:

“I break out my physical shell, and excel
past the so-called body; used to go to the party
But now I sit and chill with the pen and the pad
Dropping ill philisophical science, me and my dad
We talk about life, and how it started
How we departed from light’s path and probable right math
The task at hand, is making people understand
that we’re not who we think we are within this +Land
of the Lost+ the cost of souls could be so high
y People be gettin high, wonderin why we die
But it’s all planned, forget your fear take the hand
We keep on returning, because the lessons need learning
Concernin, the fact, I sing and I rap
I hold this mic contact, critics can step back
and analyze, I energize with cosmic rays of days the igno’
You’re in my signal from the sun”

If these plucked notes and occasional piano riffs mixed with smartly delivered words remind one of Lauryn Hill’s spirituality, it’s no coincidence. He proves on three parts of “Superstarr” that he is the man. Guest produced parts “One” and “Two” provide a dread rasta Bob Marley soul and D’Angelo smooth edge respectively, but it’s the self-made “Part Zero” that brings a straight up hip-hop attack to rip your neck off:

“Complex, this hip-hop alchemy
When I was a kid I watched Electric Company
Now I’m all grown livin life to the bone
New tone, spaceship take me home
Back to the seventh sun the seventh one
When I drop ‘Patience,’ Kevin’s done
This eloquent vernacular is black enough to break the chains of Dracula
Ahh, I’m hittin them with synonym adrenaline (HOT!)
Then I send them up to the kingdoms of the heavens then (HOT!)
A matter of time before this rhyme (HOT!)
Infiltrates the bloodstream into the mind (HOT!)
of a man livin the life in Babylonia (HOT!)
Got lonelier, she went to California (HOT!)
Frisco, hypno’s, get clothes
Crystals, take it back to the raw rap”

If you’re looking for a rap with a more direct aggression though, there’s always “Freeze.” It’s a biographical narrative of being caught up in a cypher where the competition offers tired cliches, but where most other rap writers would pull out a nine to solve it k-os instead pulls out his mind to evolve it:

“I was walkin down the street about three o’clock
When I saw another MC at the end of the block
Talkin to kids tellin ’em, how they had to get the dough
So I rolled right up in the cypher and said ‘Yo!’
Here is an example of a whack MC
Caught in the world and he just can’t see
He said, ‘What? Yo, aiyyo, you disrespected me
Now I got to battle you and show them who the best be’
He started spittin, he said, ‘Somethin somethin hot’
And then he tried to talk about the money that he got
I said, ‘Shhh c’mon yo, that’s all passÃ©
I got to break it down another way like this now
Follow me here in this moment and time
Follow the rhyme created instigated to see the crime
you commit, when you sit in the past – don’t you know?
You construct a future based on everything that you know
But to get to the unknown, we surely must erase
all the preconceived notions they keep throwin up in our face
On the daily, I run over tracks like Donavan Bailey
And break every record, in less than ten seconds’
They said, ‘Oooooh! That’s the real metaphysical
We pull down the light cause the force is centrifugal’
He tried to act up, I had to give in
Because the truth is an offense and not a sin, word life”

This album offers a variety of different formations that avoid stale and create interest for the listener. No two tracks imitate each other in succession. The deep and slow rumble of “Freeze” gives way to the gentle breeze of “Patience,” which is followed by uplifting soul of “Higher.” The one theme all cuts have in common is a transcendence from the ordinary to the sublime. It’s the same feeling one gets from listening to albums like “Resurrection” by Common or “Midnight Marauders” by A Tribe Called Quest, and “Exit” certainly aspires to their greatness. When your spirit needs refreshing, don’t look to Sprite for upliftment (no matter how many rappers promote it) – reach instead for k-os. Or as he sings on “Follow Me”:

“Easy to find, out the way things are
But how it’s supposed to be is to far
For your mind to grasp so you follow the mass
Playin’ the role of a mack, but deep inside the mack knows
The spirit is under attack, and I lead the war
With my battalion, lyrical stallion, riding
Dividing the sheep from the golden lyrical quote
If not you could get smoked
By the mind that’s all genius, I mean this
I guarantee you never seen this before”