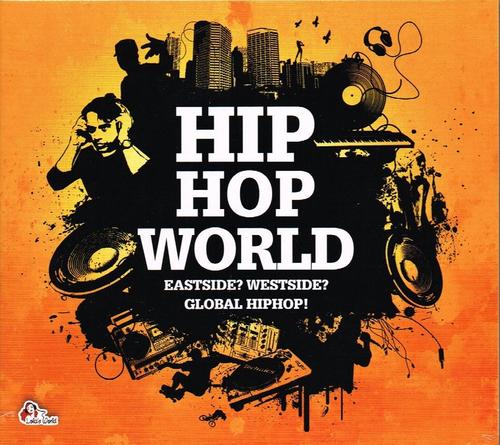 Unlike the vast majority of compilations on the market, “Hip Hop World” discloses who picked the songs. That fact alone gives it immense credibility. The first CD is compiled by DJ Ralph ‘von’ Richthoven, radio journalist and club deejay, the second by Gülbahar Kültür, a deejane and writer of Turkish heritage. Both work for multicultural radio station Funkhaus Europa in Bremen, Germany. The ‘world music’ background of the project is noticeable as the grooves are lighter and the tempos faster than what we’re used to from mainstream rap music of the past decade.

Spanish is frequently heard on “Hip Hop World.” Andalusia’s La Mala Rodrí­guez, a guest on Nelly Furtado’s Spanish album “Mi Plan,” gets down and dirty with a bassline that is as hard as it is funky on “Fuerza” (“Power”). Another distinct female voice from the Iberian Peninsula is Shuga Wuga, whose “Ya No Tengo” (“I’m Out Of…”) pitches hollow vocals against a charming beat, which might just work for a song dealing with a breakup. Control Machete feature vocalist Randy Ebright of fellow Mexican crossover act Molotov on “Ahora” (“Now”), a streamlined mixture of everything from dub to electronica that can truly be called globalized music. The compilation’s oldest track comes courtesy of Mangu, a bilingual MC of Dominican origin who had considerable exposure thanks to a deal with Island Records. 1998’s “Calle Luna, Calle Sol” (“Moon Street, Sun Street”) is the Spanish version of his biggest hit, a rap reimagination of a classic Willie Colón/Héctor Lavoe tune. Pearl and Don Dinero disclose a background similar to Mangu’s when they rap, “Yo soy mitad Boricua, mitad Dominicano / reppin’ from NY to MIA con mi socio Cubano” on “Tenemos El Juego Lockeao” (“We Got the Game on Lock”). What comes as a surprise is that Pearl goes back as far as the early ’90s when he was a member of Bronx trio Mesanjarz of Funk.

“Hip Hop World” brings to attention a particular aspect of global rap music – the confluence of cultures due to migration. Especially easily detectable when different languages are combined in the same song. “Ez Keç Im” (“I’m a Girl”), a track rooted in at least three different countries, mixes Kurdish raps and French crooning, as rapper Dezz Deniz and singer Beejay team up for an emancipatory number dressed in international ’90s pop rap attire. “Taxici” (“Taxi Driver”) is a German collabo between production duo Eastenders and rapper Sultan Tunç and carries a live feel that connects dots as far apart as Turkey and Jamaica. Arabesque and Nova Emad met up in Toronto, he being born there, she having migrated from Iraq, today following in the footsteps of her mother, Iraqi Armenian singer Seta Hagopian. Their club-ready duet “Desert Dessert,” set off by a “Ms. Fat Booty” reference, fully banks on Middle Eastern mystique. Makale, a Swiss crew with a Turkish background who has found an audience in both countries, make radio-friendly music as well, still “Sabahin Korkusu” may just be one of the best examples for the musical individuality of global hip-hop found on the two discs.

In short, the music on “Hip Hop World” stems from the most diverse backgrounds. From Emmanuel Jal’s experience as a “Warchild,” to the Caribbean roots of French ragga/rap artist Lord Kossity and the UK’s Speech Debelle (not necessarily resulting in the same kind of music). And then there are Daara J, who once claimed that rap was born in Africa and grew up in America (their ode to music, “Number One,” ironically giving off a strong Jamaican flavor).

Aside from Letoya’s Ludacris-assisted “Regret” and the Roots/Fall Out Boy collaboration “Birthday Girl,” who are both completely out of place, and the neglect of the South East (Japan, the Philippines, Australia/New Zealand), “Hip Hop World” provides a generous sample of what rap scenes worldwide have to offer. There’s the band project that embodies the idea of global urban music (Koalas Desperados, who feature UK forward thinkers Foreign Beggars on “Negro”), there’s the brave activist against female genital mutilation (Senegal’s Sister Fa). There are MC’s trying to come to terms with their role in the world (Disiz’ “Il Est Déjà  Trop Tard” (“It’s Already Too Late”)), there are MC’s demanding more from their country and its officials than what they currently portray (Goin’ Through’s “Kalimera Ellada” (“Good Morning Greece”)). There’s material licensed from major players like Ninja Tune (One Self, a group that includes DJ Vadim and Yarah Bravo), there’s stuff so obscure only experts like the compilers would have heard of it. There are beats that appeared in commercials (k-os’ “The Love Song”), there are tracks that are only remotely indebted to hip-hop (Mandoza’s kwaito tune “Nkalakatha” (“The Big Boss”)). There’s folksy fare (Kwal’s “Elle”) and soulful boom bap (Vadim’s “That Lite”).