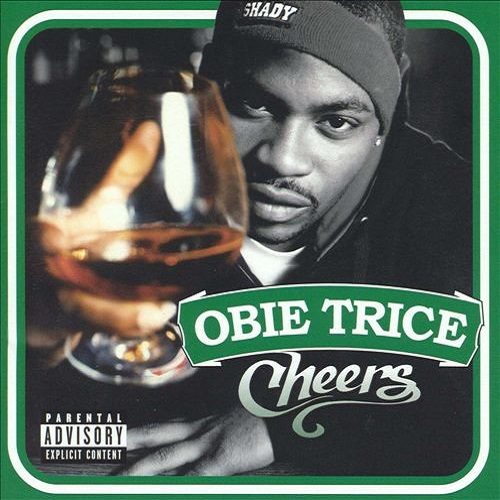 Obie Trice. Real name, no gimmicks. That’s not only an allusion to rappers like Keith Murray and Erick Sermon, but the phrase that most hip-hop fans heard spliced into the beginning of Eminem’s smash hit single “Without Me.” In truth it may qualify as the best guerilla marketing campaign of all time, because it literally postered his name and voice all over the minds of the millions who bought “The Eminem Show.” In truth though Obie Trice had been busting raps for some time. As early as 2001 he was dropping singles like “Well Known Asshole” in the Detroit area, which impressed Eminem enough to sign him to a deal and quickly record a cameo for the “Devil’s Night” album by D-12. He has been dropping gems on Shady Records releases and mixtapes ever since as well as keeping singles like “Rap Name” in the mix, but between 2001 and 2003 he got upstaged by the meteoric rise to fame of 50 Cent. He may have been signed after Obie, but his Shady debut “Get Rich or Die Tryin'” came out first in February of 2003 regardless.

Some rappers would probably take an affront like that and go ballistic. Trice had every reason to feel played like a chump, but unlike so many less saavy artists he played his position instead. He stayed down, he stayed loyal, and if he ever felt betrayed by playing second fiddle to 50 no word of it ever leaked to the press. Since there’s no evidence to say so either way, in truth he may not have at all. Suffice it to say regardless of whom or what, Obie took the cards he was dealt and still played a good hand. Seven months later, the official full length Obie Trice debut album “Cheers” hit store shelves nationwide. The lead single “Got Some Teeth” may have thrown heads off at first, but as Trice built up a sexual escapade verse by verse the chorus made it all crystal clear:

“And this is my favorite song
Now sing along when the DJ throws it on
And if I leave here tonight and I fall asleep
And wake up (*sound of water in a glass*)
Hopefully she got some teeth (uh-huh!)”

Eminem has stepped in to play producer role again on this LP, and continues to show steady improvement in his technique. The pounding ebony keys of “Average Man” make Trice anything but, while his “Don’t Come Down” co-produced with Emile could give Kanye West’s speedy samples and soulful sway a run for the money. The ominous “We All Die One Day” has been all over mixtapes this year, and “Hands on You” is a bouncy vehicle perfect for him to duet with Obie on a song. Eminem is not an easy man to upstage, but Trice goes for the gusto with a verse about staying loyal to a down down girl:

“Baby I’m feelin the feelings you giving, I’m feelin your style
And I’m willin to let my guard down to figure you out
I’m picturin your figure in a swimsuit whylin
Somewhere in the Caribbean Islands
Cause the vibe you givin me now, feels like I’m an innocent child
When sinnin is never temptin when other women’s around
Hands down, this is my vow
I never heard a moan sound so profound (OHH!)
When a nigga’s diggin you out, phone rings
You cuss them motherfuckers out {*phone slams*} quit callin the house!
If I call, you in route, there’s a drought, you look out
I’m on edge, you put the palm of your hand on my head
and you squeeeeze.. yeah
Please believe I ain’t scared of commitment, fuck head from them bitches!
When you could do the same, but that respect is given
Our intimacy is significantly different”

Now who wouldn’t like a woman like that? Eminem isn’t the only Shady affiliate producing though. “The Set Up” is one of two songs to feature Nate Dogg, and one of four expertly put together by Dr. Dre. The others include the underground favorite “Shit Hits the Fan,” the soulful “Look in My Eyes” and the eeriely strange but dope “Oh!” featuring Busta Rhymes. It has a tinkle of bells, a pulsing piano riff that hits at the right moments, and a catch phrase that Obie Trice followers are now well familiar with:

“Obie Trice – real name, no gimmicks
I came in the game, profane no image
I came in the game, with a name I was given
from a mayn who ain’t give a fuck about his child-ren
I proclaim the name though, never in vain no
Watch the change grow
A young nigga who done gained from fame Copped the Range Ro’, now they want my brains on the main road
But they don’t understaind what I came for
How I came fo’, with a million sold
Who say you can’t grow from mildew and mold
Gettin money like Ross Perot”

Other tracks don’t lack by comparison. The techno-electrical superfunk of Timbaland will make “Bad Bitch” a smash crossover hit if they can clean up the chorus language a bit (call her a “Bad Chick” perhaps). Fredwreck produces and plays guitars on the hard rocking “Follow My Life,” and even sneaks in a clever and humerous sample of “Big Poppa” – don’t worry it’s not hidden that deep and you will catch it. Denaun Porter hooks up the beat for the funky and funny “Spread Yo Shit,” and the aforementioned Emile does a track for dolo on the song “Hoodrats” – it may be the only marginal track on the album. It certainly doesn’t hold weight compared to any of the songs that follow it.

To make a long story short, Obie has a lot of things going for him on this album. He didn’t front or get buckwild when he didn’t come out the gate first, and he maintained both his street credibility and his deal with Shady Records all at the same time. In truth even though 50 may have come out first, most rap fans who get to the end of “Cheers” are going to appreciate that he has a wit, style, and gangster all his own. “Cheers” is definitely reason to celebrate, so toast a glass up to the rising Shady Records empire. They’re going to be hard to take down.