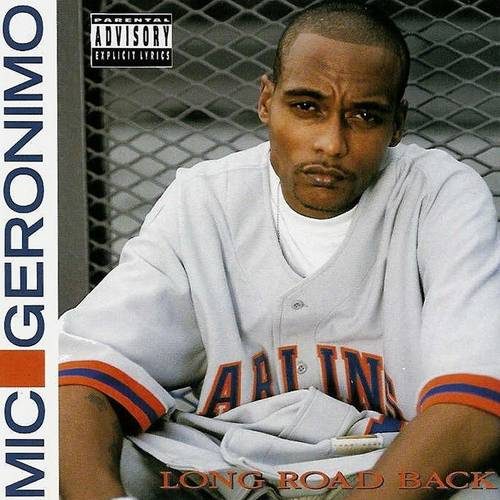 He’s worked with some of the biggest names in hip-hop music: DMX, Ja Rule, Pete Rock and P. Diddy among them. Yet for many, Mic Geronimo’s name is not a household word. In fact despite recording and releasing well-received underground albums like “The Natural” in 1995 and “Vendetta” in 1997, Mic Geronimo hasn’t blown up into a rap superstar. There’s no one reason he hasn’t reached that gold and platinum pinnacle, but there are a lot of contributing factors: an overcrowded New York rap scene, little to no promotional push from his label TVT, and the perception that “Nothin’ Move But the Money” with Puffy meant he had crossed over and sold out among them. By moving to the new label Rebellious Music, he’s at least eliminated one of the three.

Regardless it’s been over half a decade since we heard from Geronimo, and to make noise in 2003 he’d have to set it off with the kind of skills his fans loved on underground anthems like “Shit’s Real” and “Unstoppable,” along with hot to death beats; the title “Long Road Back” alone seems to show and prove Geronimo recognizes this is an uphill climb. On the latter front, the album is a mixed bag. A lot of the production is handled by Jimi Kendrix, who is nowhere near as on point as his rock music namesake – whom he also shamlessly borrows from on “Pusher.” He strikes gold on the simple and punchy “M.I.C.,” taps the sped-up sample trend for “Gone,” and that’s about it. Other contributors have a little more punch – Dollar Bill flips “Gangsta” in a smooth way Ja Rule fans wouldn’t be mad at, whom it should be noted guest appears on the “Fly High” remix over a crunchy rock riff. Large Professor drops an ethereal sounding backdrop for future favorite “Up Now” but sadly this is his only contribution. It should come as no surprise that this song also features some of Geronimo’s best rhymes:

“How real is, knowin statisticians say that I’ll be dead by
quarter life I lived, pullin my bid
So that my kids never know, bein locked up or poverty’s wrath
Sit and practice and master my craft
Took control, broke camp, halfway home
Better than when old timers came home, I can’t complain
Smile at rain anyway, too cool jewel droppin
My CD’s the answer when propped in the same way I clocked in”

Tracks like this push the potential that made Mic an underground fan favorite. His voice falls somewhere between Chubb Rock and Guru, without being as deep pitched as the first or as raspy as the second. His flow feels effortless, spilling syllables on beats with precision timing. His rhymes at their best are evocative, touching his life to the listener’s own as the words show the heart of a rapper who wants his piece of the American dream. He also knows the perils of being caught too deep in the rat race to achieve it, as the album’s closing song “Killed a Man” shows:

“Momma, I just killed a man, shot him to live
I know you can’t believe the sentence out the mouth of your kid
I know you shocked and my explanation, it don’t explain it
And I can see you cryin and riffin at my arraignment
I tried to handle it cool, you taught me the rules
Told me look up on the floor and find me somethin to use
But things you wouldn’t understand momma led to his murder
I know you never ever pictured me with drugs and a burner
Shoulda heard him, he was tellin me ‘Nigga you gon’ die’
I could see the devil dancin in the white of his eyes
He despised me, shot his heater, then I shot mine
I’d never lie to you momma, I committed a crime
And I’m alive though seein he tried to stop my survival
Forgive me the things around me done turned me to livin trifle
My rivals would love to say they left me dead in the dirt
But I could never have you goin through the pain and the hurt
I just killed a man…”

At moments like these Mic Geronimo seems like the underground sensation of old, the rapper that everyone expected to blow and probably thought had hit the big time when he rapped over a Sean John Combs track. Some of that MC is here, and some of that MC got passed by in a half decade of being out of the music scene. Songs like the blatantly jiggy “Keep it Hot” by Needlz make Diddy’s track sound like hardcore rap by comparison, “Murder & Mic G.” features so much of Ja’s Murder Inc. crew that it sounds more like their song than his, and songs like “Ever Be the Same” and “All Said and Done” sound like wasted potential; the latter in particular sounding like Mic is riffing from Ja when in truth it was Geronimo who helped put Ja on the map in the first place (ain’t that a bitch). This album is likely to produce a few hits though, including the crossover ready “I’m Alive” featuring Tyrese:

“A manic depressive, well what could be as bad as this
Where I’m locked in the bathroom, cuttin my wrists
Could it be that I’m tired of my life goin one way
The same-ass struggle from Sunday to Sunday
Damn, I used to keep a hundred grand
And it hurts when my girl sayin she don’t understand
And she cry too, sayin baby they denied you
And you got them haters in the game who despise you
Or could it be that I’ve been livin in a fantasy
Thinkin niggaz really cared, sayin they were family?
A bad dream, seein ’em stand around
And they watched me drown, I heard they mock me now
Well fuck ’em! Now that I’m gettin back on my feet
And I’m focused we all gon’ sit down to eat
And the streets said Mic man we need you back
The game’s a puzzle and son, you a piece of the rap”

Indeed, it’s good to see Mic Geronimo gettin’ in where he fits in, although the irony is that the rap game is probably an even tighter squeeze now than when he dropped out back in the late 90’s. The uneven “Long Road Back” does not guarantee him a successful return, although the better half of this album is good enough to warrant it and to hopefully pave the road for an even better album to follow. Mic’s still got skills, so it’s ultimately up to him whether he uses his strengths to pay the bills or just becomes another clone of the scene he once helped mold into what it is today.