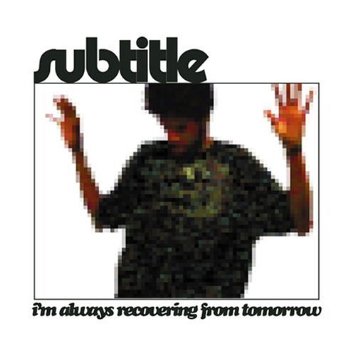 Fans of Los Angeles artist Subtitle will rejoice in the fact that after piles of self-released CD-Rs and tapes, this EP is coming out on an established label, with nice artwork and all. They probably won’t be surprised that “I’m Always Recovering from Tomorrow” is released on an indie punk/rock label, seeing that Subtitle’s brand of ‘underground hip-hop’ somewhat differs from the more refined output of most independent rappers. Given the amount of projects and posses Subtitle has been involved in (West Coast Workforce/W2F, Project Blowed, Invisible Enemy, Library, Weekend Science Experiment, Labwaste, etc.), it quickly becomes clear that we’re dealing with a rapper who is always on the move.

As a snapshot describing Subtitle’s mindstate as of early 2003, “I’m Always Recovering from Tomorrow” presents six raw, unwieldy tracks, including one remix. “I’m unpredictable, I do not lead a textbook life,” he says in the opening “A Textbook Life”, but once you heard the first cut, the rest of the EP becomes all too predictable. The same pattern of hazy atmospheres, atonal melodies, multiple voices, experimtental sound effects and stubby beats repeated in every song makes Subtitle’s work identifiable, but it doesn’t make it any more enjoyable. If a certain rhythmic feel, achieved by the interaction of instruments and voice is what ultimately defines hip-hop, then a lot of underground artists make even less accessible music than Subtitle. Alhtough bordering on spoken word, he never completely abandons the rhyme structure, he delivers the words rhythmically, and he is not a stranger to making arguments and structuring sentences. But of course compared to most other rap categories, Subtitle’s niche is as dark and secluded as can be.

“Smoke Is Smoke” is a mental note where Subtitle reminds himself that smoking is bad, no matter what it is he inhales. “Tunnel Vision” discusses the detrimental effects of love, alienating itself more and more from the original track until it collapses in a heap of bleeps. “Unstoppable 03” is a random collection of phrases that in more traditional hip-hop circles would be called a freestyle, while in “Hard Light (That’s Not It)”, he decides to cancel a verse, explaining himself after an outburst of laughter: “If you didn’t know what you missed, for the end I would basically jack these dudes for their drugs and left and sold them elsewhere on El Dorado or soemthing, there was nothing to that story at all, I was trying to make it very profound, very locacious if you will, to give it some kind of depth and feel but really it was just a gangsta rap,” adding, “it was stupid, you guys aren’t gonna regret that I didn’t kick that verse,” and letting the beat ride out instead.

At this level of refusal to comply with the norm, it becomes hard for the listener to interpret a rapper correctly. Does he, when he says that “people wanna trade their lackluster lives with me,” really think he lives some adventurous outsider life we all envy him for, or is he being sarcastic? Judging from only the five songs on “I’m Always Recovering from Tomorrow”, Subtitle is quite fond in knowing that “the world’s not revolvin’ on whatever I’m all about.” He sees himself as “a avatar of knowledge, renegade road scholar / the opposite of college, out to abolish the white collar / way of life for somethin’ that’s slightly more anarchistic.” It seems only logical then, that an independent punk/rock label would consider putting this rapper out, and that listeners who adhere to such views themselves are attracted to Subtitle. They don’t really mind that Subtitle is “makin’ it real barbaric with phonetic aesthetics,” often making it hard to make out what he’s saying. Subtitle and fans of this kind of music should be aware, however, that wanting to be different from everyone else can be just as pathetic as wanting to be like everyone else.

But whether Subtitle is really different or just trying to be, the point is that he makes highly egotistical music. Hip-hop may fit that description, but the element of communication is generally as strong. “I’m Always Recovering from Tomorrow” is self-expression pure. Ironic or not, this reviewer hears a lot of smug murmuring and not enough musical expression.