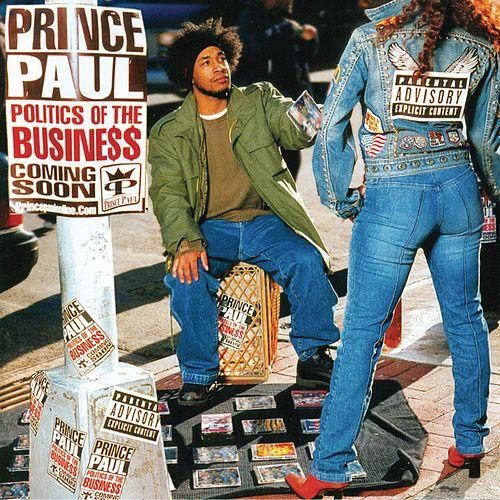 Prince Paul :: Politics of the Business

The business of making records is all political. It has less to do with your talent than your ability to be promoted, and less to do with what you know than who you know (or what label you’re signed to). As a fifteen plus year veteran of the music industry dating back to the days of “3 Feet High and Rising” by De La Soul, Prince Paul knows more than a few things about the “Politics of the Business.” What has he learned from it?

Clearly, he’s learned that he’s not a politician, nor does he even WANT to be. Despite brief stints with Tommy Boy, including the brilliant but poorly marketed concept album “A Prince Among Thieves,” Paul’s most comfortable with small indie labels like WordSound or Razor & Tie that don’t pigeonhole his music into marketable categories. Paul’s eclectic mix of funky soul, hilarious skits and quirky beats is it’s OWN genre. You can’t sell it strictly as rap, comedy or poetry – it’s a little bit of them all and then some without being just one.

True to the eclectic world that he lives in within his mind to the very end, Paul’s new “Politics of the Business” compilation is a telling look at an artist fed up with the bullshucks, and looking for other people who agree. Even if he weren’t a legendary producer most rappers would give their left nut to record with, there’s no shortage of like minded artists who don’t give a fluck about politics to get down. You’ll hear them represented brilliantly on this album, and often in unexpected combinations. West coast funk crooner Kokane linking up with East coast hardrocks Masta Ace and Pretty Ugly on “So What.” Fresno, California’s own Planet Asia rapping with the Beantown-to-Brooklyn maestro Guru on “Not Tryin’ to Hear That.” And the hilariously titled “Chubb Rock Can You Please Pay Paul the $2200 You Owe Him (People, Places and Things)” features MF Doom, Wordsworth, and thankfully The Chubbster himself. WORRRRRD UP!

“I think Masta Ace was over there on Lafayette
Daddy-O’s in Bed-Stuy, created the sonic of Stet’
In Marcy there was The Jaz, while Kane was on Louis Ave.
I’m from Vandevere where niggaz dare don’t take out the trash
We don’t, rap for nuttin, we’re all about hush cash
Every youth with a firm brow takin your bus pass
Peace to Star & Buc in Crown Heights with the smokeshop
Or my nigga Freeze and Bushwick with all that Spanish cho-cha”

The album swings wildly between the somber and the silly. On the title track Ice-T couldn’t be more plain spoken: “Anybody who gets in this business and lives off it is livin’ a MIRACLE! […] I mean, if somebody steps up and talks to me about the music business, I tell ’em not to get in it. I tell ’em it’s very very very complicated and hard to see somethin at the end of the day.” Him and Chuck D drop straight gems of knowledge over Paul’s hard beat. Just two tracks later (right after the dope “What I Need” by Kardinal Offishall and Sly Boogie), the skit “PrincePaulOnline.com” proclaims itself the one-stop ultimate eCommerce site with everything from Jigga’s used Bentley to pornos to WHALE BURGERS available for sale. Even Ralph Nader gets served in a skit, as an irate Mr. Len calls Paul to bitch that he’s so cheap he can’t even rent turntables for a show at Madison Square Garden to promote his campaign.

When you live by the sword, you die by the pen though. Sometimes Paul’s genius at bringing together disparate elements is both brilliant and hilarious, but sometimes it’s “stupid shit” as Popmaster (a.k.a. The Black Italiano) so aptly describes himself on his worthless skit. Erick Sermon’s homies Mally G and Sy Scott are dope MC’s, but on “Make Room” they’d be better served by E-Dub’s own brand of funk than Paul’s lackluster imitation. “The Drive By” is a joke that runs about a minute too long, and Dave Chappelle’s “A Day in the Life” and “A Life in the Day” prove that while Paul has lots of connections, he doesn’t always exploit them in the best ways. Don’t get it twisted – Chappelle IS funny, but the “I’m a skanless record exec” shtick has been done so many times before hearing him do his straight stand-up would have been more entertaining. Don’t forget to scan past the “end” of the disc though, to find a remix of “Original Crhyme Pays” featuring Tash, Tony Touch and The Beatnuts; or the singing and rapping mixture of “Life Slips Way” (or it may be titled “I Can’t Explain” – who knows for sure).

Paul’s clearly making a point here that by going outside the confines that normally lead to an album being on the market, he can flex his creative muscles and make an album just as strange or dope as he pleases. Well, it’s a little bit of both. “Politics of the Business” never takes itself too seriously, but you shouldn’t take it too lightly either. There’s plenty of material here that makes it worth the purchase, but (and I regret saying this) less comedy and skits and more straight up hip-hop would have been appreciated. Musically the beats don’t come across as Paul’s A-list material either. He hits the mark most of the time, but it’s neither as dope as “A Prince Amongst Thieves” or as funny as “Psychoanalysis (What Is It?).” It tries to be both and really isn’t either, but it’s still worth copping for a listen.