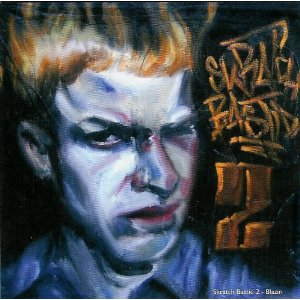 At one point in this mix-CD, KRS-One asks you to “do the math: radio gets a 20-record-a-week stream / but only 3 are ever seen / what happens to the other 17?” Hopefully, the good ones will be promoted on your trusted DJ’s mixtape. Over the last years, mixtapes (a term that increasingly includes mix-CD’s) have become an alternative medium for raps that are too fierce and beats that are too raw for mainstream daytime radio. Mixtapes are one of the few elements left in hip-hop that can proudly carry the tag ‘street’. That’s why dead prez chose to put out “Turn off the Radio – The Mixtape Vol. 1” between regular albums. It is no coincidence that its title track also found its way into Skratch Bastid’s latest mix project, the relentlessly bumping “Blazin”.

The Canadian DJ on the rise has already some local DMC and ITF titles to his resume. Representing Halifax, Nova Scotia, he looks to move up in the ranks in the upcoming DMC Canadian DJ championship in Montreal after taking fourth place last year. One routine he has already won folks over with this year can be found on this CD. “Juggling Justin” takes Justin Timberlake’s “Like I Love You”, contrasts the Neptunes’ sonorous acoustic guitar riff with the scratched outbursts of some soul shouters, lets the live drums do their thing and then gets busy juggling the beat once Timberlake reaches his “I used to dream about this when I was a little boy” breakdown. You know that part where he commands, “drums”? That’s the centerpiece of “Juggling Justin”. Fittingly, Skratch Bastid ends the routine again on “drums”, ushering in Edan and Mr. Lif and their breakbeat-heavy “Get Wise ’91”.

It is this reviewer’s conviction that the disc jockey is the heart of the hip-hop body, keeping everything in rotation, pumping rhymes and beats to the farthest extensions of hip-hop, providing them with life-sustaining nutrients. As its vibrant existence echoes his own activity of mixing, cutting and scratching, it is primarily the beat that a DJ listens for. You could say the two live in a symbiotic relationship. The beat both requires and empowers the hip-hop DJ. It’s true, Rakim argued that ‘MC’ stood for ‘move the crowd’, and he may have been right when it comes to emotions, but on a physical level, the beat-controlling DJ will move a crowd more efficiently than any rapper can. So while the better known mixtape jocks concentrate on getting exclusive drops and disses and get so excited about it they can’t seem to shut their trap, Skratch Bastid takes the liberty of selecting songs that have tight beats +and+ rhymes and keeps his mouth shut.

Starting with a hilarious skit featuring fitness guru Richard Simmons getting you in the mood, Skratch Bastid works his way through short scratching showcases and a bulk of recent joints, always ready to work wax and fader when it comes time for another song but not interfering too much once a song plays. As expected, the one Snoop song that makes the cut is the Primo-produced “Batman & Robin”. Staying true to his preferences, Bastid carries on with thumping tracks like the Motion Man and Biz Markie duett “Hold Up”, Talib Kweli helping out Blackalicious on the “It’s Going Down” remix or Jurassic 5’s “Freedom”. The only rappers here that have been known to occasionally wear the thug tag besides Snoop are Cormega (with Large Pro on “The Come Up”), Nas (who sees Jadakiss cut from his “Made You Look” remix, a pity given Jada’s enthusiastic intro and solid performance) and Kool G Rap who spars with Vinnie Paz on the Jedi Mind Tricks’ “Animal Rap”. While these MC’s are liable to pop up on a Kay Slay tape, they get major props outside of the thug niche as well.

In addition to the inclusion of lesser known songs such as Medaphoar’s “Place Your Bet” and Electric Company’s “Respect Life”, Bastid also offers local rappers mic time, such as Nathan Cruise who bigs up his man with: “DJ’s, they never saw it comin’, my man diamond-sharp with plastics / speak with his hands, a scratchin’ Bastid / “The Butcher Shop” put him in shock, leavin’ two Technics a pile of ashes / 1200 classic…” Other exclusives include Kunga219 from The Goods, Cee!!!!!!!! (way to draw attention to yourself…) and Tachichi. Check also for Gordski and Kaleb Simmonds doing a drunken parody of Eric B. & Rakim’s “Paid In Full” on “Superboozers”. At a total playing time of over 72 minutes, “Blazin” finishes with a string of uplifting songs, Wordsworth’s “On Your Feet”, Kweli’s “Get By” and finally “Stella Kuen” by local icon Buck 65.

Check for Skratch Bastid doing production for Kunga219, Tachichi, beatboxer/singer Kaleb Simmonds and Johnny Hardcore as well as preparing his own full-length with some of these same people. Arguably, some folks might lament the relatively small amount of turntable trickery on “Blazin”, but regular mixtapes get copped mostly for the song selection. Like any good DJ, the 1200 Hobos member works the 1’s and 2’s with his audience in mind, and that’s exactly what you can expect from someone who, when he isn’t touring with the likes of Awol One and Sleep, has two weekly club gigs, a radio show AND a demon-battling Mr. Hyde to his obliging Dr. Jeckyll.