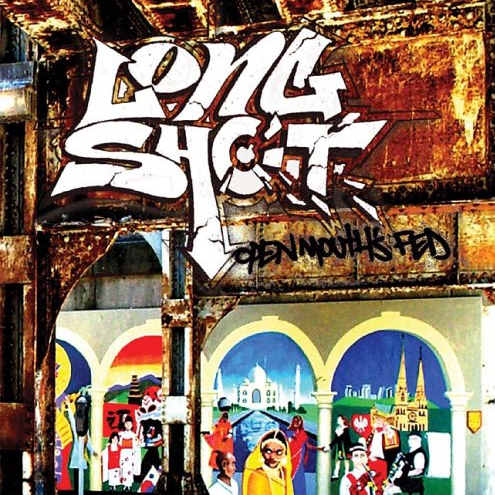 When you’re a reviewer that strives for a certain amount of objectivity instead of just going by your own preferences, you will sooner or later be thinking in terms of target audiences. You’ll be pondering questions like: Which consumer group does this record cater to, and how does it measure up to their standards? If you’re like me and would like to see some diversity in people’s listening habits, you might even be tempted to turn that thought upside down, trying to get the Busta Rhymes fan to check out some UGK, and the UGK fan to check out some Cormega. But every now and then you come across a record that doesn’t seem to talk to any particular demographic. A humble local record that still has you wondering about who you could make it palatable to, because frankly, it’s got its moments.

Such is the case with Longshot’s “Open Mouths Fed”. Describing his delivery as squarely centered between Aesop Rock and Ludacris already tells you that it isn’t quite easy to pin this Chicago rapper down. If any final judgment can be passed, it’s that Longshot is a rapper that rhymes with urgence and with a purpose. He sets off with the rattling “Blind Hate” and immediately draws you in with his engaging flow, sounding pressured but never out of focus when talking about obstacles and how to overcome them. A strong initial impact he immediately follows up with “I”, a thumping track that goes extremely well with his relaxed flow. As with “Blind Hate”, where a classic T La Rock vocal sample (“It’s yours!”) enhances the already powerful track, it’s the hook that boosts the warm, welcoming effect the track already has on the listener with some extra horn stabs. Longshot continues his winning streak as he goes into “Locked Behind”, a moving piece about physical and mental emprisonment. Again the hook serves as a climax, when he and a background singer join in the same chorus, him rapping, her singing.

So far into the album, it looks indeed as if Longshot is able to keep his promise that “the Windy comin’ out this time with better songs.” In “Get Myself On”, he relays his struggle to make it as a rapper, refusing to be “another average MC speakin’ on a pop,” but still showing himself fluent in the language of the street:

With “Ready to Die”, the feeling of witnessing a rapper that needs to be heard intensifies further. Where other rappers would lose themselves in overly dramatical descriptions, Longshot simply puts his finger on society’s sore spots:

These things are of genuine concern to Longshot, who doesn’t just throw the token socially conscious song on his CD, but actually makes several attempts to reach the kids he cares for. No need for him and Jims51 to deny that “that’s who we tryin’ to reach” with their collaborative effort “Motivation”. “Grow With Me”, a plea to stop the violence, might remind people that before Gang Starr’s “Who Got Gunz”, there was “Tonz ‘O’ Gunz”.

The title track, however, should probably have been left to guest rapper Diverse, who does the thoughtful theme of the song much better justice. Clearly the major gripe with Longshot and his album is that he could have paid more attention to lyrical detail. He has solid argumentation skills, he has a clear message, and yet there’s the feeling that his verses pack unnecessary lyrical padding that prevents him from delving deeper into a subject. This doesn’t necessarily include the battle tracks (“No Wins”, “Wicked and Raw”, “Run Shit”) or flow exhibitions (“Styles”, “Can’t Nobody”, “We Just Blaze”) but rather the ones mentioned above.

Other selections, while featuring solid musical backgrounds, don’t seem to work at the ultimate ‘song’ level. “Pretty Brown Skin” veers between the daytime radio format and something you’d put on a custom CD reserved for your bedroom only, “What Would You Do?” features some rather sloppy songwriting on the topic of dreams, and neither is a track titled “Nothing Really Matters” something you’ll feel compelled to follow, at least not without a clear concept that would explain the title. Also, at a track total of 20, there is bound to be some filler. As usual, leaner would be meaner.

On the outside, nothing distinguishes Longshot from many other rappers who found their way into a recording facility. He’s another local rhyme slinger without a gimmick but with something to say. He’s got a solid flow, a strong voice, he has an ear for beats. From the outside, it would appear that Longshot should be able find his audience, at least on a local level. Yet while researching for this review, I came upon a recent article that laments the lack of local support for rap releases emerging from Chicago and reminds readers to pick up, among others, “Open Mouths Fed”. Let me issue another reminder to Chi-Town residents, and furthermore encourage out-of-towners to lend Longshot an ear.