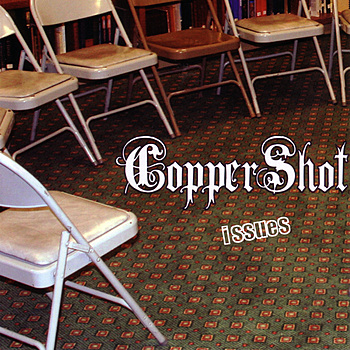 Longshot is the MC and Copperpot is the producer. They team up to make Coppershot. Both artists are serious about their craft and serious about this artistic union, and this seriousness has yielded an album that is sometimes funny, sometimes sad, sometimes controversial, but always heartfelt. Right away, I’m giving an “A” for effort. Copperpot’s beats are hard to describe, but not because they are beyond words. They generally have a variety of sounds happening at the same time, but his sense of pastiche is by no means irritating or overdone. He’s after a kind the of dense smoothness that made Jay Dee famous, and for the most part succeeds.

I take issue with the fact that you can tell he’s trying not to sound like anyone else but doesn’t really have a sound unto himself. That’s a pretty minor criticism, but I think something needs to pop more in his compositions. Maybe things need to be mixed with more dynamism. All I know is that the individual elements are sick, and deconstructing even the initially boring beats yields impressive finds. He’s got the ingredients right, but he needs just a little more work on the presentation of his dishes. You might disagree, but I see a tremendous amount of potential in Copperpot and I’d like to hear him make some more frenetic, spastic decisions. This is the type of producer that should be trusted to run wild, and he should do it more often.

For example, the martial strings and woeful trumpet on “Who’s Turn is It?” are well complimented by the tuba that holds down the lower register, but some amount of bombast is missing, some much-needed element of surprise that never kicks in. He’s got his ears open, he pulls from a variety of styles, but he needs to clarify his technique. That said, the stuttering rhythm of “Breathe” is pulled off well, but a little something else would have made it the malfunctioning robot it almost was. The gray-day oboes and ghostly cooing on “C.A.P.S.” does well to set a hopeless mood, but something extra could have pushed the song into the sinister territory the lyrics clearly beg.

I recommend Copperpot continue doing exactly what he’s doing, which I’m guessing is always listen to new and strange music and try to make new and cool sounds. He’s got the kind of style that should branch itself out as much as possible, try crazy El-P type shit, and then distill itself into something more immediate, less diffuse. You can do it, Copperpot. I’m pulling for you.

From the perspective of Longshot, this album is a totally different animal. Longshot is an MC that sounds natural on the mic, but I bet his lyrics look amazing on paper. He’s technically advanced, has his breath control on point, does not rap about ignorant shit, and clearly spends a lot of time writing his shit to specific concepts, not just battle-type stuff that he could probably do with his eyes closed.

“Can You Believe?” has Longshot saying, “Even our babies, maybe we should pick another way to live on/ Cause when we ain’t around, they in the streets doin’ wrong.” He echoes this general call to consciousness throughout “Issues,” and one gets the impression that he would be satisfied as an MC if he caused his listeners to examine their lives and the consequences of what commonly goes on in the streets of America. “Black Father’s Day” examines the consequences of living without a father to moving effect, and Longshot sounds genuinely concerned that tomorrow’s youth grow up with role models. The ambling keys and multi-aged group chanting “Brotherman, work it out” is a truly masterful touch by Copperpot; this song achieves what the duo are going for: social as well as musical importance.

On “Forgive Me” Longshot teams up with KRS-1 and Akbar, and KB to deliver an indictment of G.W., but something becomes obvious as soon as Kris rips the mic: Longshot should rap with more flagrancy. His lyics are tight and his delivery is sick, but Tha Teacha gets on the track and sounds like a human, a real, angry human He rips the track to pieces and grabs your ears by force. If Longshot can glean any of that grit, that over-the-top drama that makes words pop, a lot more people will be listening to his very competent rhyming. Not to mention that Longshot’s rhymes are meant to be rapped with conviction, meant to be rapped with heart, and live or die with their delivery. If there is a way to present these words with more character, it should be done. To do otherwise is a disservice to Longshot’s talent.

What we have with “Issues” is an above average CD that is full of thoughtful songs meant to provoke social change, and as a result their album “Issues” is good. The beats and rhymes are nothing to sniff at, but these artists can and will do better things in their careers. There is a palpable synergy between the two, but I’d recommend that while generally untouchable, I’d like to see more delves into the specific. These are two artists that should be making albums. I’m proud of their intentions.