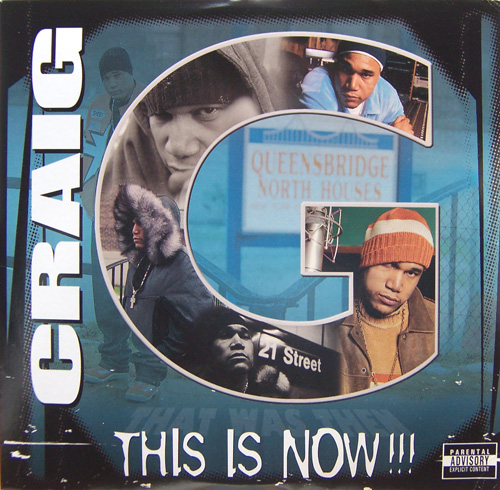 You can imagine him being asked about his legendary freestyle battles or his membership in one of hip-hop’s most revered crews, and Craig G snapping impatiently at the interviewer: “That was then, this is now!!!” Yet the truth is that the rapper who made his debut in 1985 at the age of 13 with a rap version of the Tears For Fears smash “Shout” has come a long, a very long way. Hailing from the notorious Queensbridge Houses, Craig G rhymed his way into the prestigious Juice Crew, forever making his mark in hip-hop history when he appeared on the seminal posse cut “The Symphony”. The Juice Crew eventually disbanded, but Craig was still able to drop two albums solely produced by Marley Marl, “The Kingpin” in 1989 and “Now, That’s More Like It” in 1991 (both on Atlantic).

They flopped. Badly. Shit, most people who hold the Juice Crew in high regard never even heard them. Where did that leave Craig G? Off the proverbial map. Or so it seemed. The nineties progressed, Craig G worked on an album that never came out (“Return to the 7th Letter”), but was able to keep his name in the mix thanks to his freestyling and battling skills which he honed wherever an open mic was being offered to him. Eventually, he found his way into the recording booth again. Producers like Frankie Cutlass and the UK’s Creators called for him. As a Queensbridge veteran, he was invited to the “QB Finest” and “41st Side” compilations. And he became a regular at the now defunct D&D Studios, whose owners, David Lotwin and Doug Grama, subsequently signed him to their new venture, D&D Records. Yet what ultimately got his latest project off the ground was that his name is closely associated with Eminem’s hit movie “8 Mile”. If you don’t know by now, Craig G is responsible for penning the verses of Rabbit’s opponents.

It would be nice to see Craig G parlay this newfound prominence into record sales. Even though money, as you should have guessed by now, is not Craig’s main priority. Or else he wouldn’t be spitting lines like these:

“Ready, set, begin, I highly recommend
when you hear this real hip-hop you call up a friend
and let ’em know it ain’t your average payola-assisted
bullshit on the air that’s leavin’ the game twisted
havin’ niggas and bitches chasin’ riches
thinkin’ that can make them happy, that thought is quite ridiculous
And this shit I’m ’bout to say might get me blacklisted
but I don’t give a fuck, I gave my life to this shit, kid”

That’s not to say that Craig is sticking his head in the sand looking for an underground audience. Or else he wouldn’t seek access to the clubs with tracks like the Nottz-produced “Now That’s What’s Up” featuring Mr. Cheeks or last year’s “Say What Ya Want” single (also included here). But even with a Rockwilder beat and a rowdy hook (“Stomped”), Craig G isn’t really fit to tear up the clubs. The 31-year old sounds more comfortable over straight up, simple hip-hop beats. DJ Premier’s “Ready Set Begin” is certainly a good example with some trademark vocal-snippet-scratching and a sparse sample/drum ensemble. Large Professor comes through as well on “Love Is Love”, pumping out a thumping track accentuated by a blaring horn sample from Quincy Jones’s “Ironside” theme. “We built this hip-hop shit, cling on the back,” offers Craig as he trades verses with his fellow Queens mainstay. Classic it is not, but nonetheless a track that would have suited “1st Class” as well.

Lyrically, however, it’s where Craig focuses on his core competence that has lasted him so long, that his lyrics will most likely leave a lasting impression, as evidenced by “Executioner Song”, where he taunts opponents over a jazzy headnodder courtesy of Caspa. Chances are that folks who were attracted to this album by the “8 Mile” association are specifically looking for battle raps. It’s them that Craig might have had in mind when he decided to open up “This Is Now!!!” with “Don’t Care Who We Bang”. Over a hard-edged beat by Curt Cazal, he declares his readiness to battle anywhere anytime, perhaps adding a dash of irony he may have developped during his long run as one of rap’s most relentless battlers:

“I’ll battle your whole crew, even out-hype your hypeman
We can do it on tin roofs holdin’ antennas in lightning
Bring all your rap books, even that one up in the nightstand
say ’em all at the same time, the results are still frightening
You could amass every lyric you’ve written in your lifespan
but in this battle it won’t work, so tell that thought goodnight, man
I blackout, then calmly decapitate your right hand
make sure that you will never hold another mic stand
We can do it over ballads, throw on some Peabo Bryson
Battle at the deli while the sandwich machine is slicin’
Catch you at the laundry just as you put your whites in
Have you spittin’ your hardest verse prayin’ to God I might bend
Fuck it duke, we can battle on Letterman
Turn your fanbase to mutes till your name ain’t never said again
And I don’t care what you sold, platinum or gold
If you hustle we can battle as you cook work on the stove”

Having gotten that off his chest, Craig is ready to tackle other topics. Though his cautionary tale about a dangerous dame (“Wrong Chick”) is something you’d expect coming from another ex-Juice Crew member (Kool G Rap), The Alchemist arranges it sparesly, so that it doesn’t come across too thugged out. The other narrative, “Damn This Day”, is a convincing run-down of a day going wrong suffering from a thoroughly uninteresting beat.

For those reacquainting themselves with Craig G for old time’s sake, it will be more interesting to hear him talk about his past. “Do It Over Again” starts out with a shout-out to Jam Master Jay while in the background Domingo cues up a sped-up soul sample. Knowing there’s no turning back doesn’t prevent Craig from looking back:

“March 24th, 1972
the doctor said he’d be great at whatever he do
Moms bounced to the Bridge from a spot off Lennox
where the building was towed up and had dopefiend tenants
41-11 10th, by the bench my feet
first touched down to the sounds of some hip-hop beats”

Echoing MC Shan’s classic “The Bridge” and its inspirational conclusion (“It really gives me such a good feeling that before I leave this earth I make a name for myself – and you can too”), Craig G doesn’t forget to mention that back when Shan made Queensbridge a household name, a young Nasir Jones was listening as well: “Nas was in my same school, didn’t know he could flow.” Chalk up another dedication to the infamous housing projects:

Speaking of, the rapper Craig reunites with his mentor on “Let’s Get Up”, for which Marley dug up a throwback loop and programmed a simple syncopated beat, and soon enough Craig is off to reminisce on their chemistry:

“When I said Craig G and Marley formed an ultimate alliance
In “Droppin’ Science”, believe it when you heard I wasn’t lyin’
It’s the ‘dopest duo comin’ outta Queensbridge’
We be the niggas hustlin’, Ruger shots, splatter your spleen, kid
Cause Marley Marl is still the best hip-hop percussionist
So I don’t wanna hear none of your beats, there’s no discussin’ it
With Craig G on the mic, tell me what fucks with it?
[…]
Ask any DJ, our shit’s a top collectable
See, that’s the difference between hits and classics
We still doin’ 40 gigs a year, you bastards
We attract the masses, live at sound clashes
Any part of the world, from Berlin to Aspen
And when the club’s so packed with heads they’re gaspin’
For air, I’m right there with a mic ready for action
And that nigga Marley (cuts so fresh!)
And my impact on his tracks will crash yo chest”

Considering the ill-suited club tracks, or Curt Cazal’s lame “Place Ya Bets”, it would have been interesting to hear more than just one Marley beat on this project. And that’s where it’s time to talk about the downsides of “This Is Now!!!” Putting your man on who not only sounds like Biggie but also mentions him (“Words From Warbucks”) is bad judgment. Getting lost in multi-syllable rhymes while a young labelmate (Krumb Snatcha) shows you how easy it is to express yourself without these technical limitations (“Make You Say Yes”) isn’t the wisest move either. Then there’s the vocal issue. Craig tests a fresh flow while sparring with Afu-Ra and beatboxer Kenny Muhammad (“Dribble Or Shoot”), but elsewhere his delivery is somewhat simplistic. Only older heads will recognize the change in his voice. In his younger days, it had more bass and more timbre, while today his once charismatic voice has lost a lot of its charm. Arguably, most of today’s rappers enhance their vocal performance with various studio tricks, while Craig seems to like it real and raw. But since the voice plays a big part in the perception of a rapper, it’s sad to see this once characteristic voice gone.

Nevertheless, “This Is Now!!!” is an album well worth your attention and, hopefully, your money. Be his new album a success or not, the way things are looking Craig G isn’t about to leave us anytime soon, not when he sums up “Ready Set Begin” like this: “And the whole point that came from a vet / is hip-hop I still love you, I ain’t done with you yet.”