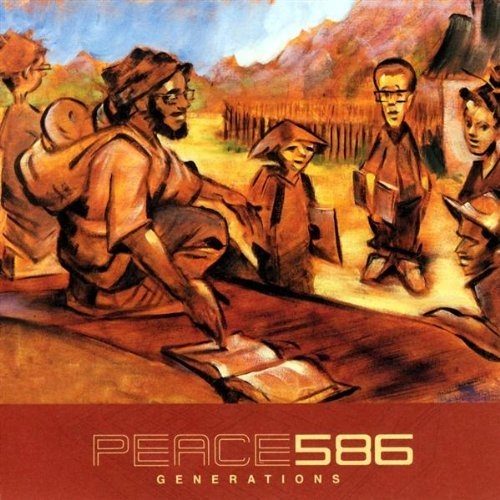 Every genre has its pioneers. Some acknowledged, some forgotten. The longer a genre exists, the more people are being added to its list of pioneers, people who continue to breathe life into it, who may even create a new sub-genre. The genre of hip-hop knows many pioneers, some more important than others. But there’s one branch that hip-hop itself has very little knowledge of. This reviewer, for instance, can consider himself lucky if he gets its name right. Gospel rap? Christian hip-hop? Who pioneered it? What were its defining moments? Rather than presenting the results of a sloppy web research, he admits to having no idea. The only thing that comes to his mind sizzling under the summer heat when thinking about pioneers and Christian rap is a group named T.Basic from his native Switzerland (a seemingly unlikely place to have anything to do with hip-hop to begin with) who back in the day recorded some of the country’s first non-English rhymes.

Fact is that Christian hip-hop has been around long enough for some of its leading exponents to consider themselves pioneers. It might surprise some to see a vintage hip-hop sentiment expressed so strongly in this type of music, but these Christian MC’s are demanding respect from their peers. Peace586 even made a song about it. Assisted by fellow veteran Noel Arthurton of the Dynamic Twins, he’s out to get his:

“If anything, I earn respect
so bet your bottom dollar that respect is what I expect
especially from you crews who followed us from the get
[…]
Respect those who came before your crew
Respect is somethin’ earned and not given to you
freely, you expect it that easy? Please, Bee
It takes years of hard work and payin’ fees, see?”

On “Progress”, Peace finds advocates in I.D.O.L. King, fellow pioneers he goes back with to the early nineties. “When my dog Peace asked us, see, I was down with it / cause back in the day he put us down in it,” one of them offers, and so they step forward to pay their respects:

“Yo Peace586, picture you givin’ me a call and I don’t respond
that’s like me dissin’ a dime, forgettin’ where I came from
MC, you’re classical like a throwback jersey
We go back like psychedelic posters, heads on roller coasters
hula-hoops, crayons, cap guns and holsters
Toured together, memories forever
Stuck in mud and bad weather, history together
Forget the past I can’t, I got the photographs
they make me laugh and keep my head up like a giraffe
Though you’re old school like a jherri curl
what I love about you most is you’re approachable
Although we disagree about ‘Gifts of the Spirit’
We got mo’ in common through Christ, in the spirit”

We all know how people who seemingly believe in the same thing can have the strongest doctrinal differences. More than just his buddy from back in the day giving him daps, “Progress” is a plea to fellow Christian hip-hoppers to overcome these differences. As the chorus goes: “In the Christian rap community there would be unity / if cats would shake peripheral pride and seek humility.”

And that’s what this album is ultimately about. It’s not a veteran recounting battles that have long been fought. Rather, it seeks to blend the old with the new, by uniting Christian MC’s of today (Pigeon John, Raphi, Remnant, New Breed, Mass Reality, Sev Statik), tomorrow (Propaganda, Dokument, Saturday Night Freestyle) and yesterday (I.D.O.L. King, Dynamic Twins, Sup the Chemist). At the center of it all is Peace586, himself a 15-year veteran of Christian rap. Any outsider can see that such a project is an important one for the genre, and maybe he will start to wonder why a “Generations” album isn’t possible in the bigger worlds of commercial and underground rap, or just hip-hop period.

So secular hip-hop heads have reason to be jealous when they see Peace586 and singer Jon Gibson team up for “Love’s Still There”, an update on their first collaborative effort, “This Is Love” from Freedom of Soul’s 1991 album “Caught in a Land of Time”. Listen as Peace expresses his gratitude in simple yet touching words and you’ll realize that more than anything, it’s their faith that keeps these folks going. Mix that “love supreme” (as John Coltrane once put it) with the love for hip-hop, and you get songs that successfully serve two masters, at times making it difficult to tell whether they’re talking about God or hip-hop. Cuts like the gripping “Bonds Like These” or the airy “Mourning for the Art” build upon the self-empowering tools offered by both religion and rap music:

“I heard the word being spoken, it broke me down
made me check myself, made me spin right round
Found myself doubtin’ myself of what I could do
didn’t believe in myself, yo, I thought I was through
Stopped chillin’ with the crew, stopped samplin’ too
thought it was a little somethin’ that I had outgrew
But when you’re called there’s little that you can do
God gon’ make sure that you continue
Until it’s finished, I know I’m supposed to be in this
not only from the 15 years of experience”

Arguably, like many hip-hop albums these days, “Generations” can’t shake the demon of repetition. There’s only so many times you can demand respect and confess your calling. If it wasn’t for the many different styles presented by the various guests and the generation-bridging theme that holds the album together, it would be an album for hardcore followers only. Although musical diversity is ensured, the tracks themselves offer little variation. Some of the hooks are either dull (“Solid”) or too detatched from the verses (“Mourning for the Art”). The opening “Hear Me Now” leaves a bad first impression as Peace’s performance is a bit too lazy and lackadaisical while the chorus ruminates the old ‘hater’ theme.

Its repetitive nature aside, there’s no denying that this music spreads an undeniably contagious charm. These Christian rappers can be damn convincing, presumably because they’re so convinced themselves. Their performance on the mic would probably prevent them from becoming commercial tools as well as hip-hop legends. But when this Bronx-born Puerto-Rican taps his experience as a rapper, as a believer and as a human being and comes up with music as spiritual as “Love’s Still There” or lyrics as sincere as “No More Yesterday”, it becomes clear why he’s the man to put out this “Generations” project:

“See, I’m tired and I’m about done
but before I get up out this I gotta at least one young
person know, know that you’re about to get took
Know that you’re about to get had, take a good look
My yesterday’s a sad thing, I got nothin’ to show
Don’t even blame nobody but myself, although
if someone would’ve teached me what I’m tryin’ to teach
my tomorrow wouldn’t be so far to reach”