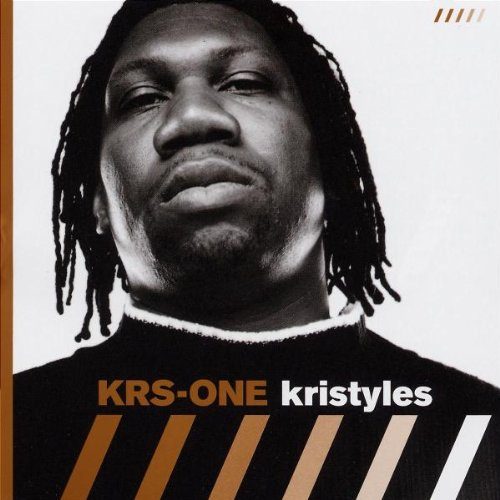 It wouldn’t be a KRS-One album if there wasn’t a firestorm of controversy. Self-taught, well-respected, but also a raging egomaniac, his solo albums since leaving Boogie Down Productions in the 1990’s have swung the pendulum between genius (“Return of the Boom Bap“) to strange (“The Sneak Attack“) but at least arguably have never been boring. Laurence Krisna Parker may have lost some of his fans on “Spiritual Minded” though – a fine album that got unfairly tagged with the “it’s boring because it’s Christian” label. In response to this criticism and to keep the fire going lit by his feud with Nelly, he quietly released “The Mix Tape,” one of the best albums you didn’t hear in the last year. He promised therein to return in 2003 with “Kris-style” to show everybody how real hip-hop was done, the right way.

Instead of “Kris-style” though, Koch Records released “Kristyles,” and therein lies the controversy. KRS reportedly tried to block this album being sold, because the label not only got the title wrong but included a slew of tracks he felt were either not ready for public consumption or didn’t fit the message he wanted to present. No less a source thanScarface record released earlier this year it’s still worth examining to see whether what the label put together is a good or poor representation of the MC.

One thing long-time KRS-One fans should already be familiar with is his phenomenal vocal abilities. He is to the mic what James Earl Jones was to the voice of Darth Vader – commanding and powerful. Breath control for Kris is refined by 20 years of ripping shows everywhere around the globe, his eloquence in diction makes each word ring clear, and his writing ability makes him the rap E.F. Hutton – when he talks, people listen. The difference between a bad KRS-One album and great KRS-One album usually has more to do with WHAT he says than HOW he says it, and the beats that support it. On tracks like “Ya Feel Dat” the beats take a back-to-basics approach that’s fondly reminiscent of his “Boom Bap” days, and Kris doesn’t waste any time tearing into it:

“Show me an MC that think he’s too hot
Bring him to KRS-One, I’ll show him he’s NOT
Blowin the whole spot up when I spit up
Knowledge Reigns Supreme, when I walk past, get up
My wrists ain’t lit up! I don’t even live that life
Gold, diamonds, platinum, I give to my wife – you see
Diamonds are a girl’s best friend, not mine
You got it, FINE – but what about that rhyme?
Can you rhyme? Can you spit it quick
like watermelon pits at a picnic? Ha!
Or are you just dressed up with nowhere to go?
Or is the record company the pimp and you the ho?
LET’S GO!”

Righteous indignation about the degredation of hip-hop music and kulture (he prefers to spell it with a ‘K’) always has been and continues to be one of KRS-One’s biggest strengths. His “if you don’t like what I’m saying, get the fuck out” attitude may have burned bridges in the past, but regardless of that he’s still kicking ass. And by linking up with famed rap producers Da Beatminerz, KRS-One is taking his message straight “Underground”:

“It’s time that I open with a thunder sound
Now look around your own town for the UNDERGROUND
Yo, you rhymin for the TV, or a million CD’s?
You ain’t a MC, you ain’t UNDERGROUND
You could be platinum or gold, hot or cold
But it’s the respect you hold that’s UNDERGROUND
When the critics don’t get, that for the streets you spit it
When your lyric they fear, that’s UNDERGROUND”

As much as KRS may have been upset by this release, there’s a lot of material on this album his fans won’t be upset at. Newcomer Peedo duets nicely with Kris on “How Bad Do You Want It,” the anti-consumerist “Ain’t the Same” treads familiar ground in a nice way thanks to the Ghetto Pros on beats, who also do a nice job in setting the anthemic horns and soul for his call to arms “It’s All a Struggle”:

“It’s all a struggle – and most people’s struggles are doubled
You ain’t the only one with a challenge facin some trouble
Look at the woman chewed up by the dog with no muzzle
Or the workers that got trapped underground in that tunnel
Some kids are playin in pools, others in puddles
When they listen to the news the propoganda is subtle
But it’s time for you to know that the cryin got to go
Release the guilt that you built and let it flow
Slow and low, that is the tempo
Move slow and on the low, this you gotta know
You don’t get the muscles without the hard struggles
You ain’t the only one out here tryin to get dough
From the hustler to the preacher to the government leaders
From the airline pilot to the chef to the teachers
We linked in the same huddle, in the same tussle’n’bustle
Cause at the end of the day, it’s all a struggle”

Another example of KRS-One at his finest – bringing disparate groups of people together to unite for one common, positive cause. The album takes another turn towards “Boom Bap” on Tine’ Tim’s track “What Else Happened” – which also reads as a parody or tribute to the Juvenile “each line ends the same” rap style. KRS picks things up again on the following track “Somebody,” once again being laced up heavenly by Da Beatminerz. The biggest surprise though may be his self-produced “Survivin'” featuring Tekitha of Wu-Tang Clan fame. KRS has slowly but steadily been improving behind the boards over the years, and on this track he shows that flipping it on both sides of the studio is not a problem at all. If you’re reminded of “All for One” by Brand Nubian, is that a bad thing? Nobody’s flipped it for a while, so now it’s time to hear it with Kris’-style:

“When it comes to the cash, we ain’t equal
Rich man, poor man, poverty defeats you
Where my people? Yo, Kris see you
There’s only one of you, that’s why you gotta be you
Them others be see-through, flashin and flossin
Me I’m with Inebriated Beats in Boston
Strivin, survivin, we get cash often
But do you really know what daycare be costin?
All my fathers, all my mothers
All my sisters, all my brothers
Hold your head up and teach them younger cats
It ain’t where you’re from, it’s where you’re at!”

Word to Rakim. The album doesn’t slow down as it goes through the seocnd half. The eerie DJ Revolution produced “Things Will Change,” Da Beatminerz slinky and smooth cut “The Movement” and another self-produced blessing from Kris in the form of “Gunnen’ Em Down,” showing he can do Tine’ Tim’s stripped down style in his own slick way. Of course, it ain’t dope beats without the dope rhymes:

“I don’t despise thugs, I +ADVISE+ thugs
I teach y’all thugs, cause that’s what I was
Yeah I say was cause today I’m above
All the guns, illegal funds, the crews and the drugs
ANY HOOD I walk in, they show me love
They say ‘Knowledge Reigns Supreme, WHATTUP CUZ?’
Cops wanna get sit down and get all bud
They wanna think as they drink drink down to the suds
I respect it, but I don’t get down with the fuzz
I don’t drink with DT’s I don’t hang with the judge
But truth be truth and I got the proof
Most ministers were straight thugged out in they youth
See if you’re over 25 and you never got live
when it was time to ride, you ain’t got no heart
But if you’re over 26 and you’re still in the mix
and your life you ain’t fixed, you ain’t doin your part
You see them cats on TV, playin the role?
Gassin y’all, them cats be over thirty years old!”

Kris just keeps on dropping gems throughout the CD. For an album he was very upset was released (and arguably not including his Jam Master Jay tribute is a TREMENDOUS INSULT, no doubt about it) there’s no denying that songs like DJ Revolution’s “9 Elements” and his LONG OVERDUE reunion with Kenny Parker on “Alright With Me” represent some of his BEST SONGS IN YEARS. He even cleverly flips that fast and sweet R&B style that Kanye West and Just Blaze popularized on his self-produced “The Only One.” For those who were upset at KRS-One for being too preachy on “Spiritual Minded” this album will be refreshing. For those who were upset at KRS-One for choosing weak beats on “The Sneak Attack” this album will be refreshing. For those who have been waiting for KRS-One to release an album as big as his ego, “Kristyles” is that album. It’s strangely ironic that this album may end up being pulled from stores, considering. My advice? If you’re a fan, go cop it now while you still have a chance, then cop “Kris-style” when it drops later. If this is not the best version of his new album, then the best one is bound to be a MASTERPIECE.