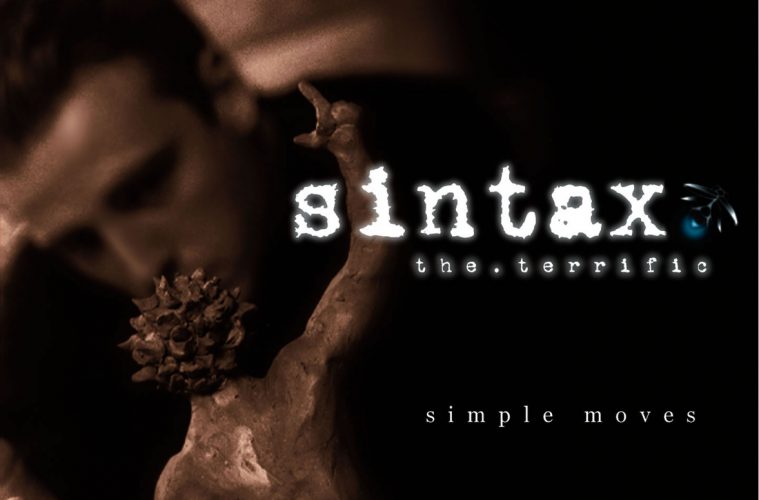 It’s rare when an artist can leave you utterly speechless. Leave you with that mind-controlling feeling that seemingly forces you to stop whatever you’re doing and just listen. Listen to the words, listen to the beat, comprehend the message, and ultimately immerse yourself in every intricate element of the music. When the CD stops spinning (and assuming you don’t just rewind back to track one and start all over), you’re left questioning yourself, questioning Sintax, questioning your neighbor, and questioning God, all the while starting to find answers in these very same places . It is quite infrequent that an artist can pull this all off and do it so outwardly effortless, though very satisfying when it does. There’s no limit to the amount of superlatives you can attach to music like this, but in this situation we’ll use one in particular: terrific. Sintax.The.Terrific makes terrific music.

Sintax starts with a spoken introduction set to simply a piano tune. The first words on the album, “Would it not be best all the same to stop with faith? /And is it not disturbing that everyone wants to go further?”, sets the tone for the entire album. Sintax begins to ask questions, conjure your thoughts, and spark ideas that you either had never thought of or had pushed to the back of your mind. “Blowing Smoke”, track two, Sintax basically insults himself throughout, poking fun and ‘blowing smoke’ at himself, while subliminally mocking all the rappers who do nothing but brag about themselves. However, the chorus ends with some very educating bars: “Blessed are the meek and blessed are the humble/It’s a struggle sometimes, pride steps before the stumble”. “Shirt Sleeve”, filled with many unique instruments to make a very mystical beat, discusses Sintax’s favorite things in this world:

“I love the ink black eyes of a cow because they’re quiet
And I wonder if there’s thinkin’ between the blinkin’ of the eyelids
And, yo, I love the water as it peaks into a whitecap
And slaps against the shore as if to say “I’m goin back”
And I love a quiet night, eating pizza with my wife
Cause It proves we love each other more than life, word up
I love Osama Bin Laden ’cause he was made in God’s image
And no matter what he does we’re called to love him just the same
And it’s a shame we can’t see it, how to put our faith in practice
Like a palette full of paints who never gets to press the canvas”

The third verse gives all credit to He who gave us our “favorite things”: God. The music continues to improve with “The Way We Walk” featuring Mouth Warrin’, who definitely holds his own with Sintax. This is somewhat of a two part song, as one minute and a half in to the song the beat stops and a new one slowly begins. Check Sintax as he begins rapping to simply an acoustic guitar, drum, and a snare:

“Survival is a state I refuse to settle for
I wanna take the path that isn’t safe anymore
I wanna walk where the battle is, rattle the cage lid
Tackle the big issues and draw a flag for the late hit
Saddle the bull and make him chomp at the bit
Straddle the picket fence and talk the undecided off of it
I wanna walk where the rubber meets the road and burns its tread
The friction of life’s tide that keeps my fire burning red
I wanna tread the razor’s edge, led by the hand of the Messiah
Make my bed in the lion’s den, sleep peacefully beside her
‘Cause the road less traveled is the cop out rout
I wanna feel the people’s pain as I move within the crowd
And walk in a way that inspires a generation
To learn to love God and then chase him
[…]
I let my feet speak truth to those who haven’t got a clue
‘Cause one act of love is worth a thousand words I rap to you
Give your boss a gift, the lost a lift
‘Cause they can tell by the way you walk, who you’re with”

As the track fades to nothing, you can’t help but get chills up and down your spine. Sintax has voice is very sincere and easy to listen to. When he raps, you can tell he isn’t just spitting words to sell records, he’s serving us emotions and feelings from his heart. He uses inflection and different pitches to convey this perfectly and uses the beats he raps on to his utmost advantage. An ideal example of this is “Firefly Syndrome”. The song, which is about Sintax trying to spread God’s light to everyone and sometimes failing, kicks in with a clarinet for the chorus and you can almost close your eyes and imagine yourself flying with Sintax as a firefly. Sintax takes shots at many aspects of the hip-hop industry, including money hungry artists, skill-less artists, and even reviewers, on “Starving Artists”:

“Be lucky to get a two, in your internet review
And a comment like “He’s aight for a Christian dude”
Well, here’s a point of view and I hope that ya like
You do a good review for a dude who can’t write
Just joking, ’cause cats have been cruel
But if a diamond is a diamond don’t qualify it a jewel
Independent rule number 9 or maybe 6
Doesn’t matter, just remember: they think God is a gimmick
But pot is legit and glocks make you legitimate
I represent the rock that is higher than my critics
“Sintax is dope”, that’s what Pac and Biggie said
Quoting dead rappers just to cop some street cred
I go without bread, take this cross instead
‘Cause if believers are behind then I’m ashamed to be ahead”

The amount of quotables is astounding and this is only track 10 of a 22 track CD. Surprisingly enough, the beats are equally astounding and thriving with originality. “Understudy” features almost exclusively an arrangement of wind instruments, with very rich, deep sound. “Turnabout” is similar, though now only a flute takes over the main melody and is accompanied by only the most basic beat-making elements. The beats range from upbeat and piano filled (“Meeting And Broad”) to much slower and dark (“Angle Of Repose”). The only weakness on this album is, unfortunately, the guest appearances. Other than Justme and Mouth Warrin’, the other emcees are just outright shown up by Sintax. Part of this may be attributed to the fact Sintax can make a lacking beat sound so much better (such is the case on “We Used to Live in an Apartment Together”, featuring manCHILD). Another element to this is the fact that six of the songs have other artists; all six of which could have held their own, if not more, weight with just Sintax’s rapping. Check the world-view-changing lyrics of “A Mantra To Breathe To”:

“Inspire your homies to get married before they score
Inspire not the score, inspire to make love
Inspire the party people to find reasons not to club
Inspire a doctor to treat the soul and not the body
Inspire your daughter to be a woman and not a hottie
Inspire a new hobby; learn a trade to teach your kids
The work of your hand, yo, that’s a Godly gift to give
Inspire a cop to do justice and not his duty
Inspire your kids to read the book before the movie
Inspire your own movie, live a life worth sharing
Courage is simply an average man’s deeds made daring
[…]
Inspire your foe, inspire your friend
Inspire complete strangers, inspire your kin
We either make this world better or we’re making it worse
So bless with your life, for whatever it’s worth”

This album has so much to offer from so many different standpoints. In addition to the previously quoted tracks, “Understudy”, “Got Beef”, “Dramamine”, and “When I Don’t Show” are all equally powerful in both their music and the message. To try and narrow down exactly what makes this album so great would be in vain; Sintax is simply terrific. Do your ears, heart, mind, and spirit a favor and buy this album; you won’t regret it.