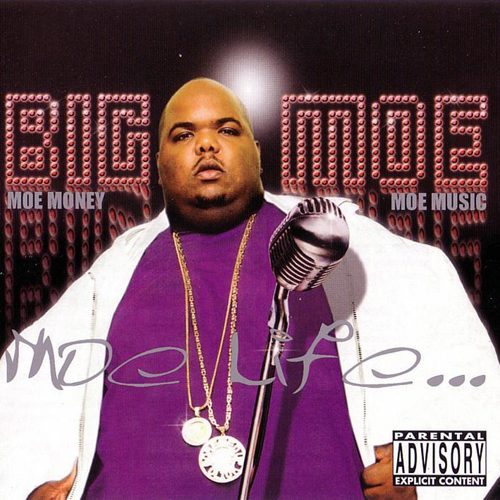 Last time out, Big Moe was (no pun intended) a hard man to miss. His album “Purple World” was picked up for national distribution by Priority Records, and a technicolorful circus sideshow video for the lead single “Purple Stuff” accompanied it. For any number of reasons though, Moe’s regional success in the South didn’t translate into big numbers nationally. That’s not going to faze Moe though. When you come from Houston and a family as well known as Da Wreckshop, you could go gold just selling records to Texas – and apparently they do. As a fan since his last release I was highly anticipating this album, but until I hit a Hastings in Round Rock, TX I hadn’t been able to find it (geographically speaking just a little ways from Austin).

With a thirteen out drive back to the midwest ahead of me, I was in serious need of some new music to hear on the way back, and Moe fit the bill perfectly. The introductory track is an appropriately Screwed (translation for the know-nots: slowed down) rap featuring the overweight lover Heavy B freestyle crooning his way through the piano beats by Noke-D, even when his cell phone causes a comical interruption. D also provides the beat for the infectious “Hell Yeah!” featuring D-Wreck and Tyte Eyez. Doesn’t matter if you have guests on a Big Moe track or not though, he’s always gonna be the star. He is to Houston what Nelly is to St. Louis – except that his vocal tone when singing is way deeper:

“Hell yeah Moe throwed, yea I get dough
Screwed Up Click, Southside still hold
And we won’t fold, let the story be told
Put it down for Fat Pat, Screw and Mafio
Hell yeah I’m a G, raised in these streets
You could be the drank man, stacking P-I-N-T’s
So if I fall off, and times get hard
Moe gon’ go back and attack the boulevard
Hell yeah I sip fo’s, might pop a X-O
Might let the sherm burn, but I’m still in control
I keep my clothes on, Moe-Yo won’t get naked
Unless I’m with a fine hoe then fa sho’ I’m gon wreck it
Hell yeah I’m gon protect it, I’m never naked headed
My life is too precious, I can’t get infected
Hell yeah I’m still chunky, hell yeah they still love me
Hell yeah I’m sittin on three’s, everything’s still lovely”

No doubt about it, you’ll be yelling “hell yeah” right along with the chorus. Things take a slightly more absurd turn musically on the following track “Throwedsville,” produced by Salih Williams. Still, it’s an excellent chance for Big Moe to show off his triple-rhyme style, and for guests A3 and Dirty $ to get some shine. The focus returns squarely to Moe on the following track “Just a Dog,” another Noke-D banger where the B.M. shows why he’s a Southern favorite with his baldfaced honesty and a chorus you can’t help vibe to and sing along with:

“Shorty” is a little more up-tempo, and is another all-in-the-family affair featuring Tyte Eyez, A3, Mafia Mike and Noke-D. When Moe does an album, nobody in Da Wreckshop gets left out. In fact other than the skits, there aren’t any other songs on the album on the album that are just Moe alone. You can’t be mad at him though for showing love, especially when he gets to shine on tracks like “Yessir”:

“And I, promise
That if and when I get caught up on a fight
that I’m gonna be, ready
See I know I can make a difference in this world
if you just, let me
Oh I’m so thankful for the day that you came along
And you just, helped me
And I’m so grateful for the year that you kept me here alive
Well and, healthy
So while I’m here, I’ma ball”

“Big Dudes” may sound alien to those who aren’t familiar with the Southern sound, but as the guests rap over a rising and repeating Noke-D melody laced with fat bass, Moe brings it back to the old school with the words “slow and low is still the tempo” a la the Beastie Boys. There’s no mistaking the point of this song – it’s about big rappers doing big thangs with big money. Don’t player hate, congratulate. If this is too ballerific for you, just wait until “My Girl” comes on. Co-produced by Blue Note and Salih Williams, this song could easily have been a bigger hit for Priority Records than “Purple Stuff” was if they had picked up the album. Musically, the sound is the same kind of urban contemporary swing you might hear on a Mary J. Blige track, but D-Gotti and Dirty $ help Moe keep the track dirty dirty. The following Salih Williams track “Every Body” featuring D-Gotti is just as smooth, if not smoover. It’s not until “Move Around” that the album regains it’s hard edge, as Noke-D dedicates his track in the intro to “all you bitch-ass niggaz” with the words “fuck whoever don’t like it.” How could you not like Moe’s soulful style and delivery though?

“I’m a rider daddy, let a big nigga breathe
You the reason why your girl keep jockin me
Got too many hands pullin on Big Moe
But ain’t too many hands helpin Moe get dough
See I was born, all by myself
If it wasn’t for the worst, I wonder who would be left
Who really gonna hold me down
When all the chips finally hit the ground?
I had to stop and look around
At all these new friends I just found
Cause when I started out singin these songs
It was me, Screw and a microphone
Slanging grey tapes, on Gravestone
All night long, sippin pints to the dome
Now I’m making hits, gettin ghetto rich
Now all these hoe ass niggaz be up on my dick!”

Damn Moe, I feel for you. He continues to sing his woes on the title track “Moe Life,” a Williams production that might be one of the album’s dirtiest tracks. The bass really rattles the speakers hard, so you’ll be bouncing and head-nodding at the same time. The next track might surprise Moe fans though who are used to him “sippin’ on that sizzurp” though – believe it or not it’s titled “Leave Drank Alone”:

Big Moe ain’t no role model, I’m only human
It’s a shame, how the world be judging us
For thangs that, we be doin
Now I know, that I’m gettin older
And it seems, the world is so much colder
And success put stress on my shoulder
Now I’m pourin less in my soda
Man I miss them days of bein young
Big sippin, big pimpin, havin fun”

It’s hard to front on Moe when he’s this heartfelt and honest, qualities that a lot more rappers should have but don’t. Noke-D and Toya provide the support, but it’s another song that’s clearly all about Moe. This holds true throughout the rest of the album, on songs like the E-40-esque “Roll Candy Red,” the somber song “Get Lonely Too” and the album’s Screwed closing track “My Life #2.” The amazing thing about the Big man Moe is that when a track slows down, his vocals don’t just get deeper – they get BETTER. DJ Screw (R.I.P.) put the sound on the map, but it was artists like Big Moe who take it to that level beyond by making it sound so damn good. Building on the strengths of his national release but taking it back to a more regional level, Big Moe’s “Moe Life…” is in no way a smaller album – it’s bigger and better, and worth driving to Round Rock for.