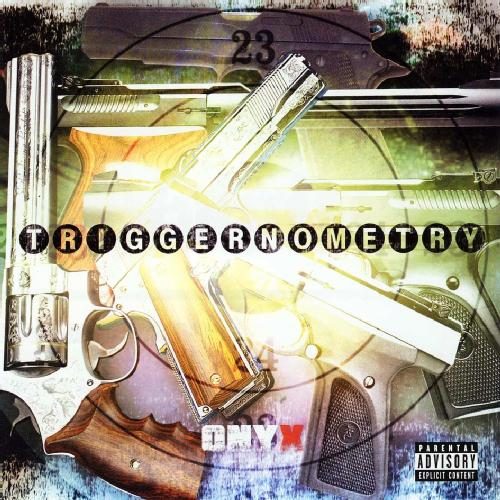 That single thought pervades the prospective buyer when confronted with a new album from Onyx. A new album from a group who released one classic album (“Bacdafucup”) in the 90’s, rode out half the decade with albums slightly better than mediocre, and was eventually disbanded so Sticky Fingaz could go solo; only to be reunited in 2002 for an utterly unworthy sequel to their stellar debut entitled “Bacdafucup Part II.” At that point, it would have been fair to write Onyx as a group off for good. Even the otherwise stellar Fingaz seemed to have suffered from this debacle, as his “Decade” solo album this year was considerably less than what rap fans have come to expect from Kirk Jones.

Something funny is going on though, and when something funny is going on in rap it usually means Ol’ Dirty Bastard album with only three original songs on it, and even tried to claim he was signed to a record deal. Then again almost anything they do is suspect. A “new” Juvenile album was really just a re-release of a DJ Jimi mixtape featuring his first local hits in New Orleans before he got large. Their “Mack 10 Presents Da Hood” album presented only mediocrity, and “El Cool Magnifico” made no noise for Coolio, a rapper who has already been reduced to guest appearances on Hollywood Squares and certainly doesn’t need more humilation than that.

Somehow though (and this is what I mean by “funny”) D3 has managed to trap all of the members of Onyx in it’s spider web. The aforementioned Sticky Fingaz album “Decade” is on D3, as well as Fredro Starr’s almost simultaneously released second solo album “Don’t Get Mad Get Money.” If that wasn’t overkill enough for the few Onyx fans that are left, now the label is putting out a new Onyx album. That brings us all the way back to where we started. Why? Why are they all signed to D3? Why are so many Onyx-related albums being released so quickly? And why does the sticker on the CD’s shrinkwrap scream desperation? To fill you in, it reads: “The new album from Onyx featuring Sticky Fingaz, star of ‘Platinum’ and the hit single ‘Can’t Call It.” In the immortal words of Onyx themselves, bacdaFUCup. “Platinum” may be a minor success on television, but the rapper has certainly done bigger and better things acting in movies like “Ride” and “Next Friday.” If he even has a career in Hollywood, “Platinum” is definitely not the be-all end-all of it – it’s just the most current. And to say “Can’t Call It” is a hit single is an exaggeration of the truth, just like the song’s claim to “feature” Missy Elliott was in itself (she doesn’t rap or sing, and only seems to have been sampled and looped in for the chorus). B-b-b-but wait it gets worse! The sticker goes on to say “AND Fredro Starr, starring in Ice Cube’s new film ‘Torque’ and the hit single ‘California Girls’.” Okay, great. You’ve pimped those connections to the maximum D3, and I guess you’re allowed because they’re signed to your label, but nobody has seen “Torque” and again saying “hit single” stretches the truth greatly.

If things weren’t already knee deep by this point, the album’s first full song “Gun Clap Music” will bury you in it up to your nose just to make SURE you can smell it. Fredro Starr should be pimp-slapped for his shameless re-interpretation of Biggie Smalls, which is not in any way shape or form flattering:

“Who shot ya? It’s too late to try to op-e-rate
Hard escape through New York State
It’s on killa, fuck all the niggaz that hate
I can feel ya shook when ya walk through the gate
Your heartbeat break like a Kay Slay tape
Bust, guns to this, raisin the crime rate
Niggaz better blast when it’s time to shoot
Niggaz on the roof tryin to blast at you”

Take this reviewer’s word for it – it doesn’t burn baby burn like Disco Inferno. Not even close. And here’s another funny thing about the album – even though the back cover lists 21 tracks, the only skits that are marked are the “Intro” and the “Outro.” I expected something dope from Sticky Fingaz on “Stick Up” but it’s just talk. So is “Def Scams,” track 5. Here’s a breakdown of all the cuts that appear to be songs that aren’t: 7, 9, 11, 13, 15, 17 and 19. It’s actually that sad – the non-songs can be passed over if you skip the odds to the evens. That means out of the previously established 21, only ten are actual songs. D3’s being “funny” again. You won’t laugh at hearing a sequel to “Da Nex Niguz” though, especially when it re-uses Sonee Seeza’s intro from the original. Sticky is the only +real+ funny thing on this album, and he does get ill here even though Kronic Tones gives him no beat to work with:

“Keep it real bitches, y’all more nasty than men
How many of y’all, take it in the ass like Kim
Or had a menage, with some nigga, you and your friend
But ain’t nuttin wrong with that, I even screw in the Benz
Matter fact, two chicks give me a harder erection
7 out of 10 bitches’ll go the other direction
Say she never ate pussy and she not no lesbian
But for Janet Jackson, she’d make an exception
Picture this – bitch had one hand on my bone
Other hand on the phone with her man at home
Sayin I LOVE YOU, while she kissin my dick
I’LL BE HOME SOON – knowin I don’t cum that quick”

Still and all though, Sticky exhibits the same problem he did on “Decade,” namely that he sounds tired and unenthused, like he’s going through the motions. In fact to call Fredro Starr and Sticky Fingaz together Onyx without any of the other members is a farce itself. Seminal affiliate X-1 shows up on “Look Dog” and “Champions” but neither of these mediocre cuts can even capture half the energy he showed on “React” from the “Shut ‘Em Down” album, back when Onyx was still signed to Def Jam. Speaking of which, they refer to it as “Def Scams” in one of the skits, but that’s pure hypocrisy at it’s finest. The real scam is D3 convincing anybody they’re more than a nickel and dime operation trying to look like Jacksons and Franklins. Sticky and Fredro are both individually talented, and at one time played well off each other in a group setting, but both seem equally uninterested in resurrecting the name Onyx and shouldn’t have even tried. Then again, since D3 has both signed to deals, they really may not have had a choice or say in it either way. While Bacdafucup Part II” had at least the pretension of honesty despite it’s mediocrity, “Triggernometry” is just a bald-faced lie. Even called “Basic Math, 1 + 1 = 2” this pathetic attempt to relive past Onyx glories just wouldn’t add up.