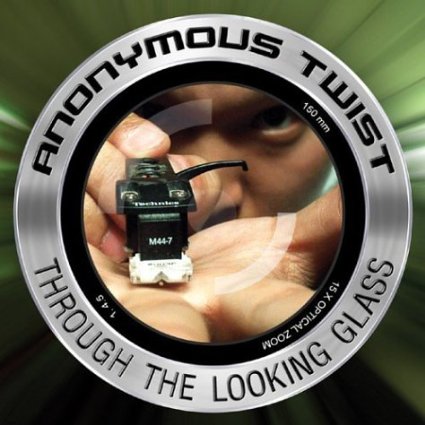 Anonymous Twist :: Through the Looking Glass

In the immortal words of one Dr. Dre, “You’ve never been on a ride like this befo’/ with a producer who can rap and control the maestro.” It’s all too often that fans of hip hop find a mediocre MC crutching on the guest production of a stellar beatsmith. Conversely, we find the corny beats of a weak producer riding the coattails of a dope MC. Lost in the shuffle is the guy who’s competent enough in both trades to forge solid beats and rhyme over them nicely.

Anonymous Twist is the last of a dying a breed; an MC who produces his own tracksâ€”or is he a producer who happens to rhyme over his own beats? Regardless of how you approach it, the Canadian born-and-raised artist is out to spread his music, and he does so self-sufficiently. There’s definitely an indie feel throughout Through The Looking Glass, but Anonymous is obviously pretty well-schooled in both the arts of producing and MCing. Many of his beats are stuttering and percussive, though pieced together nicely with fine attention to production detail, and his clear, baritone voice commands respect with a nice flow. Case in point on the plodding “Stepped On,” where he raps: “I was born to rock like Adidas on a fetus.”

Much of the material here is humorous like “Defecating,” which features, rather light-heartedly, scratched-in excrement samples such as Lauryn Hill’s line of “defecating on your microphone.” Anonymous married the perfectly-playful beat for the aptly-titled “Rock Scissor Paper” where he brings some nice lines:

“Rhythm connects, systems select live and direct
Funk mode in full effect by the truck-load
Code red, pure heat that blessed it
Past the point of no exit, caressed it
With, oven mits, still got third degree burns
I went right, you went left for three turns
Four steps ahead, foot swollen
This royal flush refutes foldin’, silence golden
My voice platinum, crystal clear chrome
Thicker than the blood you squeeze from a stone
Bleed from my bones and breath from my lungs
That blast the winds that whips my tongue
Cracks on the backs of syllables, slave stung…”

Equally dope is the funky bassline and sick scratching of “Fresh Shit,” and the altogether tightness of the Middle-Eastern tinged “Visualize The Verb,” which may be his best display of niceness on the mic. No slouch in the punchline and wordplay department, Anonymous flips it wittily on “TeeDotOh,” which, lyrically, takes a cue from songs like Ludacris’ “Hip Hop Quotables.” “Rhyme Unorthodox” displays a stand-out, Primo-esque beat, and the aptly-titled “Rugged” is just that, as Anonymous flows over a deep bassline, pounding bass drum and muted guitar strokes. To round it out rather nicely, Anonymous saves the surprisingly-smooth steel drums of “Rambling Souls” for the last track.

Serious holes are hard to find here. Anonymous may have been better-suited, though, to reserve the metaphor-laced “Lysol” for a beat a little bit more livelyâ€”or at least a bit less repetitive. The four-bar loop varies just slightly with a short string loop. Most of the interludes are short instrumentals of 30 seconds or so in length, but totaling in eight, seem pretty unnecessary. Ground-breaking production and rapping is not found here, but few albums can actually make that boast.

Anonymous Twist composes Through The Looking Glass with no outside help, and the result is a cohesive, well-conceived, labor-of-love. There’s never any mediocre moments of amateur production or rhyming. Rather than the customary hip hop standard of buying three tracks each from five diverse producers, Anonymous Twist bucks the trend and does it all on his ownâ€”with admirable success. He could have just as easily paid for the beats of other producers or drop guest verses for some other artist, but there’s no need to because he saved all the good stuff for himself.