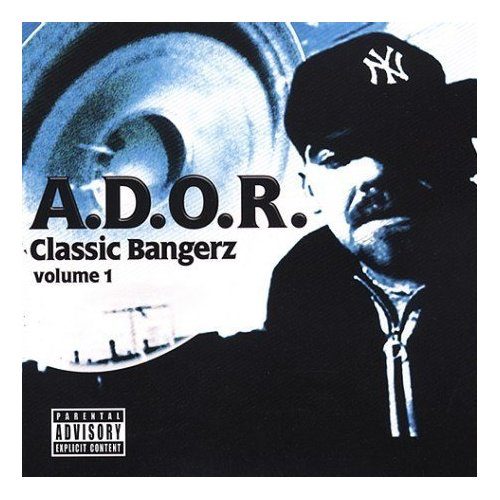 While it’s somewhat pretentious to call your album “Volume 1” with the expectation people will be checking for “Volume 2,” A.D.O.R. is better qualified than most MC’s to make that assumption. Veteran hip-hop fans will remember his first hit from 1992, the Pete Rock producer banger “Let it All Hang Out.” Hailing from money earnin’ Mt. Vernon, the up-and-coming MC had all the right connections, from Heavy D to Uptown Records guru Sean ‘Puffy’ Combs (later/better known as P. Diddy). After hearing Another Dimension of Rhythm’s demo tapes, Puffy was pushing for him to land a major label deal after hearing, and Atlantic Records came calling. “Let it All Hang Out” established the high-pitched voice and distinctive voice of A.D.O.R., and he kept banging in the underground rap scene from ’92 through ’94, but for Atlantic shelved his debut album “The Concrete” in 1995 and unceremoniously dropped him.

It’s a familiar tale in the rap world. From underground favorites like INI and The B.U.M.S. to big names like 50 Cent and Canibus, talented rappers have often had to reconcile their own dopeness with the shortsightedness of major labels that invest time and money in artists for little more than a write-off on their tax returns. Some are dealt this blow never to return, some persevere and go on to international acclaim, and some linger between the two on the verge of being large while remaining content to have a loyal underground fanbase. A.D.O.R. took the initiative to form his own label Tru Reign Records in 1996, and has since released “Shock Frequency” and “Animal 2000” to a receptive indie audience. He’s also tasted some of that fame denied him by Atlantic thanks to the song “Renegade Master.” Originally created by Roger ‘Wildchild’ McKenzie before his untimely death in 1995, Fatboy Slim remixed it in 1998 using a sample from A.D.O.R.’s underground hit “One for the Trouble” and it became an international club sensation. If you recognize the phrase “back once again with the ill behaviour” (Slim split the sentence into segments) you’ve no doubt heard it too.

It’s therefore both a welcome surprise and a treat to hear an album of A.D.O.R.’s “Classic Bangerz,” an artist who has been denied his props for too long. Even back in the day, uncouth haters characterized A.D.O.R. as Pete Rock’s “token white boy,” even though he was born Eddie Castellanos and sounds more to this ear like a long lost member of The Beatnuts. In fact it’s a shame these latin rap kings have never hooked up with Castellanos. Their collaborations would no doubt be as ill as songs like Diamond D produced jams “The Rush” and “The Kid is Crazy,” or the jazzy Clark Kent & Ski banger “From the Concrete,” or the Trackmasters bounce of “Here Comes the Wrek.” While these songs have a nostalgic feel of days gone by (even though “The Rush” is from his most recent CD), the Purple Penguin produced “Superfly” belongs in today’s pantheon of smooth underground hip-hop:

“I got my lady, Tru Reign, soon the ill Mercedes
‘Shock Frequency’ to drive all the fans crazy baby
So much, it makes me hazy like the hash
God bless my first born, comin soon to the cast
A.D.O.R.’s about to dash, makin moves like mafia
My wolves hold all stacks, sayin nothing’s stoppin ya
Organized organism, revolution realism
Prepare for new order, prepare A.D.O.R.’s prism
Blast off into my world unknown
Where execution is of MC’s on jagged microphones”

Technical lyrical writing is on point. A.D.O.R. doesn’t overdo it with punchlines, but doesn’t underwhelm by being too simplistic. He does by and large have an A-to-B rhyme scheme, but then many of today’s most popular rappers can barely even manage A-to-A, so it’s all good. A decade of rapping has also perfected his flow and breath control to the point everything good about “Let it All Hang Out” has been multiplied and magnified to a greater degree. In fact it makes Pete Rock’s “Enter the Center” from 1998’s “Shock Frequency” that much more impressive. In the six years between the release of the two songs, both show marked improvement in their technique. Rock abandons his trademark horns except for brief stabs in the chorus, and A.D.O.R. retains his distinctive vocal tone with a dose of depth that both age and maturity bring to an MC’s voice. It’s a powerful combination:

“So as you, analyze me, I paralyze you
So what’chu gonna do when the one man wreckin crew
steps up, I’m +Energizing+, +Everready+
I rock the beat hard, got a blast for the petty
If you’re ready though, you can come and enter the stage
And feel the raw wrath, and the pleasures of the rage
The rampage, my people, will not be televised
Front if you want kid, we’re always recognized”

That’s the shame of it really – A.D.O.R. has certainly had enough “Classic Bangerz” to not only justify this album but garner him wider acclaim and recognition. He even includes the “Renegade Master” remix by Fatboy Slim on this CD, along with a “Let it All Hang Out” remix for the UK done by Rae & Christian (it’s wild hot), and a “One for the Trouble” remix laced by underground bass beat master Sam Sever. As the Ja Bone produced track indicates, there are plenty of “Treasures” here for a hip-hop head to appreciate. Still with all due respect and regards to this decade long industry veteran, he’s still going to be better known by the masses as a sample in a Fatboy Slim remix. Should A.D.O.R. blow up like 50 Cent and Canibus? Few dues payers would deserve to as much as him, but the very signature voice which makes for such great sampling makes his raps a challenge for overly conservative radio programmers and unfairly relegates him to college radio and flavorful underground mixtapes. With a grill like a Manhattan construction worker and an image to match, he’s not going to woo the teeny-bopper set on MTV either, not that he cares to. A.D.O.R. seems content at this point to being an indie rap sensation and “Classic Bangerz Volume 1” will reaffirm his status in those regards. I can only question how a “Volume 2” will be made though, since this release mines so much of his best material that it seems like nothing else is left. Maybe after a few more full-length albums on Tru Reign though, A.D.O.R. will prove this critic wrong. I look forward to it.