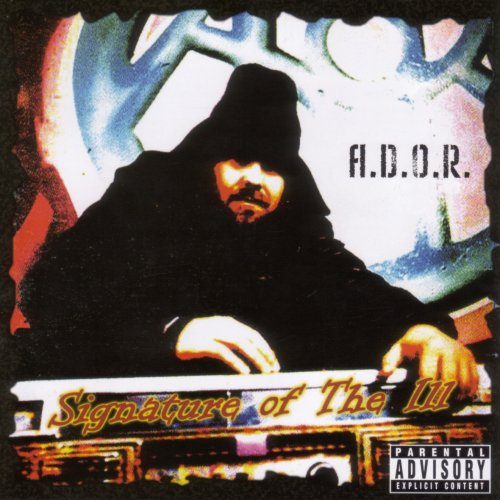 As is my custom, I listened to A.D.O.R.’s new album “Signature of the Ill” once through before reading the promotional material his record label had sent along with the CD. Usually the promo stuff consists of hyperbolic bullshit (“MC Fresh is redefining what we think of as rap music! MC Fresh is actually God, and has the power to strike down cynical critics!”) mixed with pertinent biographical info. In the case of A.D.O.R., the bullshit is at a minimum, and the musical history jibed exactly with my original impression of the album. It was a nice moment.

Allow me to explain further. “Signature of the Ill” is a really interesting and exciting release that sounds so steeped in early 90’s hip-hop, it’s hard to believe it came from this era. I received my original rap education from such ancient emcees as Kid N’ Play, which is probably the closest analogy one can use to describe the type of music found on this release. So it’s wonderfully appropriate that A.D.O.R. began his career about fifteen years ago, hooking up with Heavy D and Pete Rock, and guest-hosting Yo! MTV Raps. He’s been around for a minute, it seems, though I’d never heard of him, and it helps explain how a record can be made in the current hip-hop climate that owes so much to the classic artists of yesterday. Had he a bit more luck, A.D.O.R. could very well have been one of those classic artists.

Let’s start with the beats, because the beats are generally fantastic and the best part of the album. Producer Sir Jase contributes the majority of true bangers, starting with “No Tyme to Heal,” a subtle musical message that combines light drumming and barely audible piano. The result is a definite throwback to the general idea of hip-hop: a focus on the vocals, with a background to get you moving, or, in this reflective case, moved. Another Jase hit: “Independence Day,” which layers electric guitar licks over clicky snares and high-hats. It’s pretty intense, but not overwhelming.

Sir Jase isn’t the only talent behind the boards here. My favorite track was “See the Light,” produced by T-Love and opening with A.D.O.R. referencing that “old-school shit.” Oh, yeah, this is some old-school shit, including the repeated cries of “yes yes ya’ll” infecting the chorus. The beat is danceable and quick, but not at all loud or techno-based, less Missy Elliot and more, well, Kid N’ Play. The guitars are jaunty and happy to play along with the over-medicated tambourine. I think the best way to describe a song like this is “fun.” It’s pure fun.

Actually, most of the album is pure fun, and as you can imagine, that’s both a good thing and a bad thing. If you’re looking for depth, cop an Atmosphere album. Most of A.D.O.R.’s lyrics have little to do with anything, and the ones that do are sort of simplistic and easily rhymed. Now, I’d never hate on old-school hip-hop, but it took a few years before cats like Eminem and Jay-Z started dropping rhymes within rhymes within rhymes. A.D.O.R. can’t do that. He doesn’t even try. So there’s a caveat for you: come for the fun, stay for the fun. Don’t show up and expect to be in the middle of Little Italy, little did we know we diddled a middle-man who didn’t do diddly. You dig?

But if you’re looking for an artist with a flow that, if not terribly unique, is consistent, quick, and confident, you’ve come to the right place. A.D.O.R. may not break any musical barriers, but he doesn’t need to. So what if the chorus to one song is just yelling the vague phrase “Step Up” again and again, and a different chorus just keeps urging us to “keep it real, motherfucker, keep it real”? This is hook-free, message-lite spitting, and for what it is, it’s pretty damn good. Not great, but definitely above average.

Rarely does an album come along that is so easy to recommend to a specific group, but I think I can confidently state: if you’re a fan of the pre-Biggie days, cop the record. If not, leave it alone. There ya go.