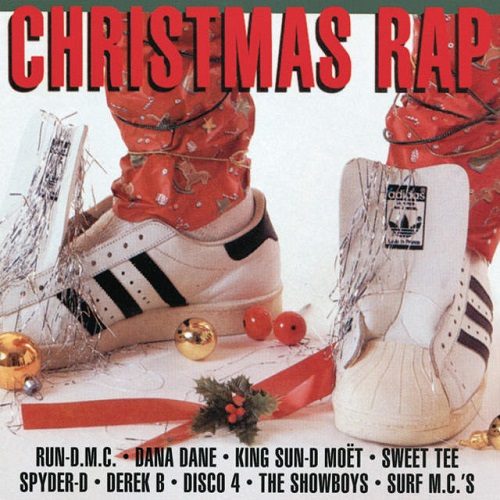 You know the words. “It’s Christmas time in Hollis, Queens. Momma’s cookin chicken and collard greens.” For hip-hop fans, it’s the song that can be held up with pride during that time of year when “Rudolph the Red-Nosed Reindeer” and “Joy to the World” are coming out of every storefront, radio station, and holiday caroler’s vocal chords. There’s nothing wrong with these classics, but Run-D.M.C.’s ode to Santa is still a breath of fresh air among their familiar melodies, a holiday anthem for the rap generation that’s now old enough to be a venerated classic in it’s own right.

It should come as no surprise then that Profile Records, Run-D.M.C.’s label of choice their entire career save for their “Crown Royal” finale, recorded an entire album of “Christmas Rap” using the Hollis trio as the cornerstone. It would have been foolish of them NOT to exploit the popularity of this song with a rap compilation featuring Christmas themes. It’s also possible that such a move may not did not sit well among hip-hop fans, given that the very “Hard Times” Run-D.M.C. once rapped about were a fact of life for many, especially in 1987 when these songs were first released. Reaganomics were making the rich wealthier, the poor more destitute, and were causing the very disenfranchisement that gave this “golden age” of rap such power. From the revolutionary firebrands of Public Enemy to the street politics of N.W.A., the message was loud as Mr. T’s mohawk and just as strident – “YOU OWE, FOOL.”

The righteous rapper King Sun exemplifies this phenomenon when he uses his chance to contribute to send a message about “Christmas in the City.” Labelled as a Rakim knock-off due to their similarity in vocal tone and flow, Sun often found himself on the wrong end of getting a fair shake from both the rap press and the mainstream. Perhaps that as much as his familiarity with poverty informs the bitter tone that can be read between the lines. The strident rapper who recorded songs like “Be Black” and “The Gods Are Taking Heads” does sound toned down here, but just barely – you can’t help but notice his is not the picture of a rosey holiday Run-D.M.C. portrayed:

“Not like in the country where you might take a sleigh ride
Ride the horse and buggy but you still gotta pay Clyde
Paper fireplace held up with tape
And Santa Claus comes by fire escape
You have trees decorated inside and out
In the city, there’s only one tree in the house
that my mother put together, limb by limb
And you can’t use popcorn string as trim
Cause the rats like salt, and roaches like butter
They hang around the tree like bums in the gutter”

While Sun and the producer of this song (the spartan liner notes don’t say who) tried to dress it up with an uplifting beat, an interpolation of “Silver Bells” in the chorus, and a message akin to Treach saying “Everything’s Gonna Be Alright” it’s certainly a starkly honest assessment of making Christmas something out of Christmas nothing. While this may not set the right note for being festive, it does hold weight for it’s honesty. Seminal female rapper Sweet Tee’s “Let the Jingle Bells Rock” can’t make that claim. With the bizarre refrain “What – you didn’t know didn’t know Christmas went hip-hop? Check the clock, and let the jingle bells rock” the sentiment feels more phony than a three dollar bill. Cornball lines like “no time for hate, be cheerful” produce opposite the desired response, and show why outside the influence of Hurby ‘Love Bug’ Astor as producer she had little staying power in rap.

Sweet Tee is at least a name old school fans of King Sun and Run-D.M.C. might recognize. Other than Dana Dane’s effectively silly rap “Dana Dane is Coming to Town,” the list of contributors for this CD was an obscure bunch even back in the day. A search for the Showboys may elicit a hit or two on Google, but rest assured today’s gangsters rappers would have nothing to do with the terrible “That’s What I Want for Christmas. It’s synthetic claps would’ve been loathed even then, and sampling Bing Crosby’s “White Christmas” doesn’t help. Spyder-D is a one or two hit wonder, depending on whether you like “How Ya Like Me Now” with DJ Doc or his “Smerphies Dance.” A year 2000 comeback failed to generate much interest, and neither will does his “Ghetto Santa.” Disco Four is best remembered for their old school song “Do It, Do It” on the Enjoy label, and best left remembered that way instead of with what may be their last ever recorded song “He’s Santa Claus.” It’s still better than the Surf M.C.’s song “A Surf M.C. New Year.” Do you remember their album “Surf or Die” for Profile that came out in 1987? No, that’s the NES game “Skate or Die” you’re thinking of. It’s a classic, but the rap group is crap-tastic.

The only other song that’s noteworthy on this compilation is Derek B’s “Chillin’ With Santa.” One of the pioneers of American’s first British rap invasion (I’m still waiting for the second) his “Bullet From a Gun” was a fine Profile release in 1988, but the label could do nothing with it and he too joined the ranks of obscurity. Given a simplistic “Rock the Bells” like beat to work with, Derek does a charming set of verses about helping Santa Claus deliver toys that doesn’t sacrifice hip-hop credibility for sentiment. Instead of a partridge in a pear tree, Derek B wants a pair of socks from Gucci. Who could argue? I certainly wouldn’t want a foul bird in a sickly uprooted tree pooping all over the place – I’d much rather have the footwear. I’d also much rather have an EP that includes the Dana Dane, Run-D.M.C., King Sun and Derek B songs – the rest could easily be discarded or replaced with Eazy-E’s hilariously irreverant “Merry Muthafuckin X-Mas.” My advice for would-be purchasers of “Christmas Rap” during the holiday season is that while it has the right name, a lot of the content is just plain lame. Be sure to have a tall glass of egg nog and a 40 of Olde English handy, and a sledgehammer suitable for venting your ire on the disc when you discover even they won’t help you stomach it.