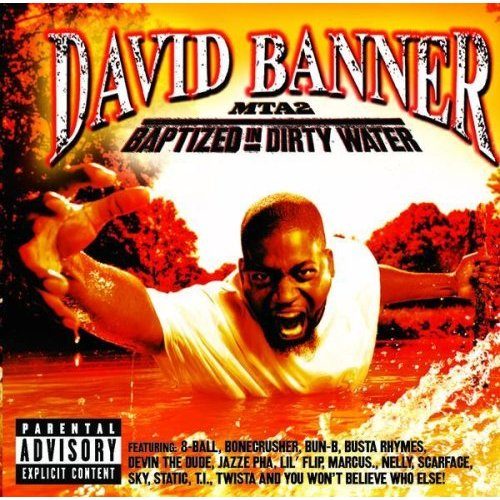 Just a short seven months after repping his homestate nationally with “Mississippi: The Album,” David Banner is back with “MTA2 – Baptized in Dirty Water.” It might seem fast, but it’s certainly not unprecedented. In fact, it follows the pattern set by DMX in 1998 – one album in May, and another in December. DMX was riding a wave of national popularity and widespread exposure that was hot enough to carry sales of two full length albums in such a short time, and one can argue that Banner is as well. Not only was the last album’s song “Like a Pimp” a huge club, rado and TV hit coast to coast, he has become a top producer of choice for rappers (particularly in the Midwest and South) looking to score a big hit or remix one they already have. Banner’s own mega-hit deserves a second look too, so Banner once again has “Like a Pimp” as a single but this time brings in Twista and Busta Rhymes on the assist; Busta even giving Twista a run for his money as the song’s fastest rapper:

“Y’all know who it is!
Betta believe it’s Busta Rhymes, so start runnin around my nigga
I bust a nigga head, instead fill him with lead you
You better chill when my runners around, my nigga
I got a lot of bitches playin with each other
in a hotel room while they rollin around, my nigga
Cause everytime we in a place every nigga know
Flipmode gotta be holdin it down, my nigga
Sick, with a little ‘dro, sick, with a little dough
Sick, with a little flow make you love it a lot
Quick cause I gotta do it and I gotta rep
for the rich and the little po’ niggaz huggin the block
Chicks in the mink sit in the back seat
when I’m on a strip and I roll in the drop
Sip a little bit of ‘gac dip a little
when I whip the Cadillac truck throwin the glock
And we gotta put it down and keep it pimpin ’til they can not deny
Just grab yo’ bottles and keep sippin, throw yo’ hands in the sky
All of my, people (people), keep it (keep it), goin (wassup)
You little sucka fucka tryna keep it a secret but we blowin you up
Better get it, better grip if you ain’t know
that we only messin with the hoes, better know wassup
Better pour a little ‘gac in my glass, while I’m watchin the hoes
Just like a pimp while I’m holdin my cup
Now watch me pour just a little bit of ‘gac out for my homies
Throw it back OUT, with a little shorty, blow her back OUT, like a PIMP, playa!”

There’s no shortage of guests in general on the latest Banner album, and they are all used effectively. Jazze Pha and T.I. appear on the smooth Craig Love produced “Pretty Pink.” On the slow flowing “The Game,” Scarface spits his for David over a Domo beat, who also laces “Got to Go” featuring Bun B and Devin the Dude. It’s a little surprising how many tracks BannerDOESN’T produce this time around, but to his credit he has been a busy man. He does step in for one guest appearance track though, “Lil’ Jones” featuring Bone Crusher. I’d also credit his work on the “Air Force Ones Remix,” except that this isn’t a Banner song – it’s a Nelly song that already appeared on “Da Derrty Versions” in November. Still, it was such a brilliant rock’n’roll reinvention of the original, you can hardly fault Banner for including it as a bonus track.

Banner does produce a larger portion of songs that chiefly feature him. Starting with the brash opener “Eternal,” you can find his krunked out beats on “Talk to Me,” “Pop That,” “My Lord,” “Ooh Ahh,” “Mama’s House” and “The Christmas Song.” That’s right, Banner made a song for the holiday season, except instead of joy and tidings he’s talking about “rob that hoe, get that cash, bust a motherfucker if he don’t move ass” cause they’re all too broke to have presents under the tree. Now THAT’S keepin’ it real with Christmas a hip-hop fan can appreciate, for people whose necks don’t glitter like a chain in a Big Tymers video. Mannie Fresh does step in for a beat though on “So in Love,” and he sets it off for Banner real nicely.

Through all the beats and rhymes, Banner has a message that even if you were born under bad circumstances and “Baptized in Dirty Water” you can still be good and make something out of your life. If Banner is the example on which to base it, rest assured he’s living proof. Coming with two albums in short order, the latter might suffer a little compared to how outstanding the former is, but it’s still an impressive amount of material combined with a work ethic that’s second to none. He’ll no doubt come out with another hot joint in 2004, or maybe two.