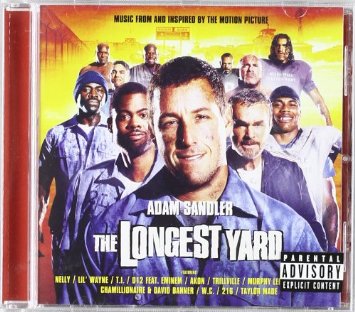 Having not seen this movie yet, or what should more correctly be described as a “remake” of the 1974 original, I can’t comment on Nelly’s role in the film as “Earl Megget.” When one examines the soundtrack for the new version of “The Longest Yard” though one can’t help noticing Nelly co-produced the album with Kevin Law, has the first track and lead single “Errtime” and that somebody named “Derrty Ent.” has co-billing as a label involved in this release. Now other than Chingy and a couple of other much less significant St. Louis MC’s, how many people d’ya know who say “dirty” like there was a four-syllable “urr” in the middle? Clearly Nelly is playing all the angles here, not just the ones found in front of a camera’s lens.

It’s no surprise that as a result “The Longest Yard” has a bit more of a country sound than most movie soundtracks do these days. In fairness it’s also a soundtrack with more hip-hop than most movies marketed to hip-hop fans these days. The St. Lunatic family does feature on it heavily, which is to be expected. “Let ‘Em Fight” is the group’s own Ali rocking the mic with Gipp from Goodie Mob fame. “Stomp” is ostensibly a Murphy Lee song, but it also features King Jacob and Prentiss Church. W.C. gets in on the action with “Whip Yo Ass” while Nelly plays a cameo role, which he also does for Taylor Made on “Datz on My Mama.” Last but not least Mr. Earl Megget closes the album with the song “Fly Away,” which may be the most Bone Thugs-esque song ever to not feature a single rapper from Cleveland. For those with Haterade in their veins that IS meant as a compliment – you can imagine the St. Louis MC changing his name to Nelly Bone and fitting in perfectly with the harmonious hip-hop thugsters.

When the time came to put this joint together Nelly didn’t make the mistake of featuring ONLY family or songs with family members, which would have pegged this soundtrack as little more than a St. Lunatics compilation album. Big names are well represented and drop interesting songs to boot. The increasingly and refreshingly versatile Nick Fury produces a crunked out whistling melody for T.I. on “Bounce Like This”:

“I could go buy anything, stick my dick in every hoe
Grand Hustle on everything, P$C in every store
Sellin everything from rubberbands to leather coats
Swear to God I never change, jealous niggaz never know
T.I.P. ain’t never been a lame, jigalo since ’84
Blessed with astonishin ability to pull a hoe
Fuck her so, good make her think this dick was full of Moe’
Pussy so, good but I love it when she suck it slow (OHH)
Her motto you don’t swallow what you suckin’ for (OHG)
My motto you ain’t ballin what you hustle for
The VVS’s let off such a glow to let these busters know”

Detroit’s humorous D12 posse gets their own piece of the action with an Eminem produced “My Ballz,” which pays tribute to the “Peter Gunn” melody and as a result may have you thinking of the video game “Spy Hunter” while they flip the verbals:

Eminem: “I’m reachin up another grown man’s butt
Hike the ball, I mean I like Bizarre
But Jesus yikes, I think I can feel his balls
My dick as long as it is hard
Yeah so are my balls – it’s ‘The Longest Yard’
Whoops that’s not the chorus
Run it back, wrong song, yeah disregard
That whole statement I just made, what yard line we on?
On 5 and our timeouts are gone, less than a minute left
I just throw my balls to the sideline to Von
He steps outta bounds, 48 seconds left
on the clock but every last one counts”

Other big rap names to grace the soundtrack with their presence include Lil’ Wayne on “Shorty Bounce,” Chamillionaire and David Banner on “Talking That Talk” and Trillville on the Emperor Searcy produced “Infultrate.” Searcy? Well he knows how to bring those low piano keys like Lil Jon, but he just doesn’t put as much thump in the bassline. None of these tracks are excessively whack, but a few are just plain uninteresting. Akon’s singing gimmick was over after the Styles P remix of “Locked Up,” so there’s nothing new to hear on “So Fly.” Some crew named 216 managed to grab a spot with “U Should Know,” but I’d much rather hear 213. Other than that Nelly has done a competent and acceptable job of putting this soundtrack together – or at the very least taking credit for it while Kevin Law did all the “Derrty” work. Whether or not his role in “The Longest Yard” will lead to a successful film career is uncertain, but as a potential rap mogul who can also still bust on the mic a la Shawn Carter, he may be perfectly suited for the part with some more sweat and hard work.