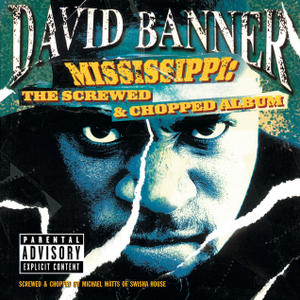 More and more, albums outside of the Lone Star State are getting the screwed and chopped treatment. While first a strictly southern phenomena, nowadays you may be able to find artists like 50 Cent, Messy Marv, and even Eminem with unofficial screwed and chopped versions of their albums. The process of slowing down music has mixed results and some music lends itself to the treatment more, but overall screwed on chopped albums are usually on par if not better than the original. Case in point, David Banner’s “Mississippi: The Album,” a release whose already dark and reflective tone gets taken to the next level by DJ Michael “5000” Watts.

David Banner’s southern growl is already menacing, but when his music gets slowed down that growl manages to become even more intimidating. This is evident on tracks such as “Might Getcha,” “What It Do,” and “F*** â€˜Em.” Lil’ Jon’s production on “Might Getcha” sounds even better dropped a few RPMs as the bass resonates better and the sinister feel of the song increases. Michael Watts’ well-placed chopping (the process of looping a certain line or repeating a word for emphasis) in the song drives the track’s violent point home. KLC’s pounding production on “What It Do” sounds just as good screwed, but its David Banner’s voice that makes the track better than the original. Simply put, David Banner’s voice screwed sounds like it should be cast in the next installment of The Exorcist. “Fuck â€˜Em” features fellow gruff-voiced MC Pastor Troy lending his vocals and also fails to disappoint.

Aside from what could be considered Banner’s more crunk efforts, his mellow tracks also take on a new life once graced by Watts’ expert treatment. The single “Cadillac on 22’s” sounds just as good and retains its mellow and reflective tone throughout. Ax’s vocals on “Fast Life” sound even smoother screwed as his high-pitched voice comes down to earth , making him sound like he’s actually talking instead of singing. “My Shawty” and ” Really Don’t Wanna Go” benefit equally from being screwed, the latter is a pretty interesting take on the screw process as it features electronic guitar riffs. The lead single “Like A Pimp” is a natural candidate to be screwed and chopped as it features Houston native Lil’ Flip. If you thought the bass kicked hard on the original, this version will likely give your woofers a test and give you a pleasant surprise.

Screwed and Chopped music is an acquired taste. Many people see it pointless to buy an album twice simply because its been remixed. “Mississippi: The Album” is one of the few albums that I would recommend screwed and chopped regardless of whether you like the style or own the regular version. The original album was outstanding on its own, and the Michael Watts remix also earns its keep individually. Banner’s anger, regrets, and voice standout even more once you enter the hypnotic atmosphere created by the screwed and chopped process.