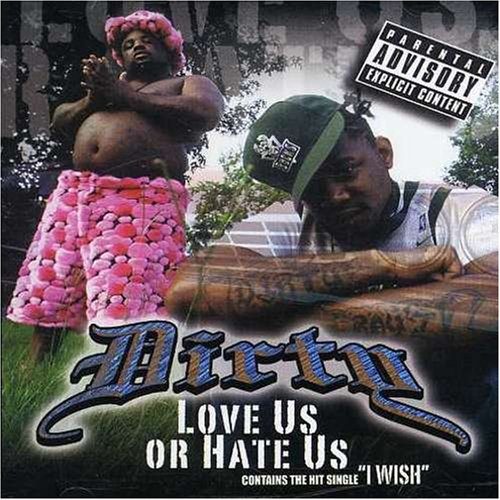 Dirty :: Love Us or Hate Us

Two years ago, Alabama emerged on the national hip-hop scene when Montgomery’s own Dirty got signed to Universal Records. It wasn’t long before “Hit Da Floe” became a national anthem, an infectiously bouncy Southern romp paired with a video putting the tandem’s loud colors and suave whips on display. Before long, critics were dubbing them “the next OutKast” while comparing Big Pimp to Big Boi and Mr. G to Andre 3000. With a long delay between their first and second release though, a lot of Dirty’s buzz wore off; and although the follow-up “Keep it Pimp & Gangsta” was well received by critics, it got little recognition and almost no airplay.

There’s no question who Dirty feel is to blame for this album flopping at the retail level. On the lead track of the same-titled album “Love Us or Hate Us,” the Dirty boys are taking aim at those who stood directly between going double plat or double wood – radio programmers, music video channels, and their former record label. Things obviously went South (no pun intended) in a hurry, because their raw animosity towards their ex-label, bleeds like an open wound all over the song:

Big Pimp: “I don’t know, if I’m goin or leavin or comin
But I know, Universal got us starvin and hungry
I’m, sick to my stomach, I vomit ev-ery time
I see a video on T-V that ain’t mine
You, know I ain’t lyin, half of ’em can’t rhyme
Black Entertainment, why y’all won’t play mine!
We, gave, two-fifty, those and BET
For both, we paid two hun-dred G’s a-piece
Y’all must don’t like us, ALL Y’ALL must hate us
We don’t, get no love, and support, from our label
Two whole years, and y’all just dropped the album
With no, fuckin commercials, or promotions to tell them
that we, was, comin, so, people can go run
into the nearest music store, so we can have us some money
So I could, feed all my kids, pay all my bills
Rent thirty days late, so where the FUCK we gon’ live!
Nelly and Baby sellin records way in, Timbuktu
If y’all put all the money behind them, what the FUCK we gon’ use?
But Nelly and Baby, we ain’t hatin, we just lettin it be known
To show the whole world, how Universal, doin us wrong”

Dirty is pumped up and ready to go, and even though they’re dropping two albums in the same year, it’s clear from this song that the last release was material Universal was sitting on for ages while this is the fresh-fresh pimped out material that’s all brand new. The Big Pimp produced “We Still” is their reassurance to loyal fans though that just because they bounced labels they’re still “gangstafied” and “still ridin vogues” like old times. The Maxamillion produced “24 Inches Woodgrain Grippin” couldn’t make that point more clear, although most listeners may prefer T.I.’s ode to two foot rims. Max comes correct on “Pimp Life” though, with the velvet smooth backdrop and falsetto vocals any wannabe Bishop Don Juan could ask for – except of course Mr. G ain’t no wannabe:

Mr. G: “What is bout gangsta, that got you sprung
From him catchin nuts on your tongue
From him pullin out yo’ guns for him
Bein turned right around and spend all yo’ funds on him
Just spoilin him, and spoilin him
It’s only two days you been knowin him
I guess this goes to show the wimps
This boy’s here born to pimp forever!”

Topic matter is definitely rated TV-MA. “Keep My Name Out Your Mouth” featuring Baby Pacino is a raucous ode to stomping those who talk too much trash, with a Big Pimp beat and sound that could make Lil Jon jealous. “Gangsta Wife” could be called Dirty’s version of Apache’s “Gangsta Bitch” for 2003, except it’s as sweet as potato pie and could crossover even further than his did (if released as a single and promoted correctly). It would be a better choice what the album cover promotes as this LP’s hit single “I Wish.” That’s not to say the Dirty boys don’t represent on Max’s pulsing bass, but the song is watered down with too many unknown rappers as guests and nearly impossible to edit for radio with it’s numerous “I wish a motherfucker would” refrains.

Older rap fans will catch a case of deja vu on the Max and Pimp co-produced song “Ain’t No Sunshine,” and may even catch themselves spitting the Ice Cube lines “ain’t nuttin goin on but the bomb-ass rap song” to the beat – it’s all good though. “If I Die Tonight” has nothing to do with Tupac Shakur though, other than he’d probably be proud of Dirty’s resilience and strength in overcoming adversity. At over six minutes long it’s an epic song, one of Big Pimp’s strongest beats and Dirty’s best songs to date. The album wraps up with songs like “That’s Why I” featuring up-and-comer Lil Burn One, the gospel influenced “No More Tears,” the anthemic “Paid My Dues” and a track that abruptly ends due to a recording error that sounds like a sequel to “Hit Da Floe.” While this is a good third album for the Dirty boys, the manufacturing quality of the album that caused this error is just one sign they took a step down since leaving Universal. Their lyrics and music are still tight, but Maxamillion is hit or miss and so is the crew of Rap-A-Lot MC’s who wander in and out of their songs. Dirty is better self-produced 3/4ths of the time, and better as a duo on their own 4/5ths of the time. However you slice it though “Love Us or Hate Us” is a statement about their refusal to be ignored, even if they have to go to the extreme lengths of jumping ship and pitching in with a Southern label in it’s waning days of once bright glory. Dirty shines more light on them than the other way around, and will probably only be using Rap-A-Lot as a stepping stone to a new deal with the respect they TRULY deserve.

Dirty :: Love Us or Hate Us
7Overall Score
Music7
Lyrics7