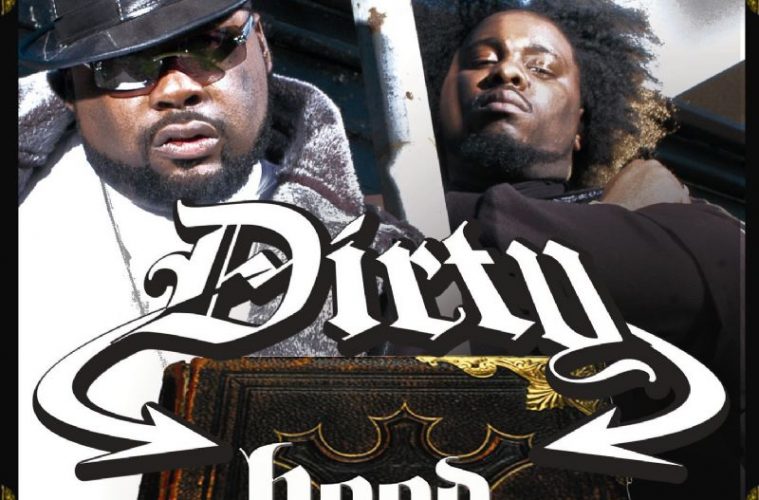 In this day and age when hip-hop constantly sings the praise of hustling and has been established as a serious hustle of its own, work ethic is an important quality. So while this is my first encounter with Alabama’s Dirty, I can only admire the fact that they have just put out their fifth album in six years. After their indie debut, 1999’s “Country Versatile,” Dirty were signed to a major as Universal scanned the Gulf Coast for profitable rap acts, resulting in 2001’s “The Pimp & Da Gangsta” and 2003’s “Keep it Pimp & Gangsta.” The prestigious deal went sour, and Dirty’s fourth album, “Love Us or Hate Us,” was released by longtime southern label Rap-A-Lot. Two years later, the duo is back with another album for J Prince.

Production is kept in-house. Mike Dean contributes two tracks and teams up with Maximillion on a third one, the rest is entirely left to Maximillion. One of the most capable and consistent producers in the game, Mike Dean is a master of sample-free hip-hop, one of the few who can make keyboard-based tracks sound classy. On “Choppin’,” he serves up one of his typical slow jams, a finely tuned arrangement of keyboard layers, a funky bass, subtle organ, piano and flute stabs and tightly woven percussion, topped by an intriguing hook featuring vocoder vocals plus the screwed and chopped phrase “Choppin’ down the block, bitch,” and finally finished by a rock guitar solo. There’s so much going on on this beat, yet it retains a simple beauty. Dean’s other contribution, “Just a Little Bit Mo,” is up there with the best Parental Advisory tracks, pensively echoing guitars intertwining with Tanya Herron vocals and a down-to-earth rhythm section. Maximillion has a similar approach, a penchant for layered production, but he adapts the contemporary sounds, lacing his compositions with oft-heard ingredients. The Mike Dean influence is evident on “Moma I’ma Soldier” and “Sometimes,” compelling combinations of melancholic keys in minor and stutter-step percussion, on “What It Is?” with its plucked synth strings, in the lush, lascivious background of “Silky Pimp Cutta,” or the single “Rolie Polie,” with its thick bottoms and sexy swing of the hips. What Maximillion lacks in originality, he makes up for with versatility. “Alabama (Stand Up)” stalks with intense drama, “Stop Lyin'” is infused with the ratatat of Memphis, “Git Cha Handz Off Me” and “Behind Ya Duke” offer the trademark combination of solid low end and crowded percussion, “Pray 4 Me” and “Sunshine” are pure R&B, while “Let’s Ride” possesses the catchiness of bounce.

Like their main producer, Dirty can be sure of their craft. While their style marks them as Southern from tha roota to tha toota, they show a diversity not always present on the albums of their peers. “Alabama (Stand Up)” is the standard homestate anthem, a song that symbolizes the same pride as the Alabama tatoo on rappper Pimp’s back: “Pimp and Gangsta still reppin’ ‘Bama, better ask, hoe / What you muthafuckas think I got it on my back fo’?” For people still remembering Dirty only for “Hit Da Floe,” this energetic opener is to assure us that Dirty and Alabama will remain a fixture on the hip-hop map. “Let me take you back to when the Pimp and Gangsta ‘Hit Da Floe’ / You knew the South was finna blow when ‘Pimp and Gangsta’ hit the do’,” they proudly claim on “Choppin’,” but even if some people would like to pigeonhole them as one-hit wonders, Dirty continue to “let ’em know that ‘Bama got flows.” And not only that, they also got rhyming skills and songwriting talent. “Sometimes” is a reflection on redemption, on the good, the bad, the beautiful and the ugly in life. “Just a Little Bit Mo” is one of the best songs addressing strained father-son relationships in recent memory. “Sunshine” chronicles a brief love affair, offering a break from the prevalent pimping (which this album isn’t safe from either):

“Now when I first metcha we had somethin’ special
Late night conversations, early morning breakfast
Tellin’ me how much you hate your man and wanna leave
and in that same breath tellin’ me I’m all you need
You know the life I lead, I’m always in the streets
for me to stack my g’s, that’s the way it’s gotta be
But I can’t even front, my feelings ran deep
more deeper than a preacher early morning Sunday speech
We start chillin’ hard, then got split apart
When I’m on the road doin’ shows you think I’m screwin’ broads
Slowly but surely we lost all the sparks
and all that sunshine faded off in the dark”

Although they certainly owe to UGK, Pimp (formerly Big Pimp) and Gangsta (formerly Mr. G) are closer in terms of how they write and perform. They are on the same level and each handle introspective verses and rambunctious rallying calls with equal expertise, so that it may take some time to distinguish the two cousins. The clearest sign that Dirty are able rappers is that whatever the topic and whatever the mood, once they start an argument, they finish it, when other rappers can’t focus on one thing for longer than two lines. Even when Dirty are heated, they plea their case intelligently (and humorously), such as on “Git Cha Handz Off Me,” a surprisingly aggressive response to prejudiced police profiling:

“I done already ate the weed, so ain’t no need for the cops chasin’
I pull up to the side of the street givin’ my ID and registration
I’m headed to the daycare center, officer, to get my baby
If I keep bein’ late pickin’ ’em up then DHR’ll take ’em
He told me he don’t give a fuck, he don’t care nothin’ about my situation
Well I ain’t give a fuck, open the front door, knock him down on the pavement
That goes to show ya how they act ’round holidays and Christmas season
Just to get that bonus they get to stoppin’ niggas for no damn reason”

They each get a solo cut (“Silky Pimp Cutta” and “Bring Da Hood Back”), but it’s plain to see that Dirty work best as a duo. This is less important when it comes to club tracks (where the Bun B-featuring “Rolie Polie” wins over “Behind Ya Dukes”) or formulaic offerings like “Let’s Ride,” but it’s important when it comes to the ‘hood stories’ part of this album. To Dirty, this ain’t just another title picked from the vaults of the rap vernacular, not the way “Choppin'” is introduced like a Southern version of Slick Rick’s classic “Children’s Story.” On “Pray 4 Me” they ask their mothers for spiritual mediation, because, as Pimp puts it, “it seem you and grandma got mo’ pull than me.” He continues: “I need a co-signer to pray for me, my credit bad / from all the crime and bullshit I did back in my past / I’m sendin’ a message to my Father in a Hennessy bottle / just hopin’ that He answer cause He get it from my moma.” The latter is also mentioned in “Moma I’ma Soldier,” but who they’re really addressing in this kind of 2Pac tribute that No Limit was never quite capable of are their adversaries and allies:

“Ready for war, muthafucka, and we ain’t gonna stop
for any niggas that oppose, they probably work for the cops
21 guns gon’ pop for all my soldiers that bleed
21 niggas gon’ drop before my soldiers at ease
A Colin Powell for the hood but we ain’t fightin’ overseas
cause every hour in the hood, shit, we fightin’ over cheese
A whole brigade of Cadillacs, Impalas, Chevy Caprice
a whole parade of thug niggas ready to die for they Gees
For all my folks, Crips and Bloods, today’s color is green
We chose to fight against each other cause our mind is deceased
The real enemy’s the fuckin’ Klan wearin’ them sheets”

That’s the kind of combatitive spirit that Houston’s J Prince has mentored for more than 15 years. In terms of exposure, Dirty may have seen better days, but as far as a record label, Rap-A-Lot is certainly closer to home than Universal. After all, what Gangsta spits on “Stop Lyin’,” makes him highly eligible in case the Geto Boys need another replacement:

“I’ma keep it real precise, nigga, cause I know your type
Get behind the mic, then start lyin’ about your life
Always talkin’ ’bout the hood and how you been a Gee
but ya ain’t never in the hood and always got security
Never where you say ya at or where you supposed to be
Ya ain’t never been a threat, everything make-believe
How many fake niggas will it take before they see
that it’s still real niggas left in this industry?”