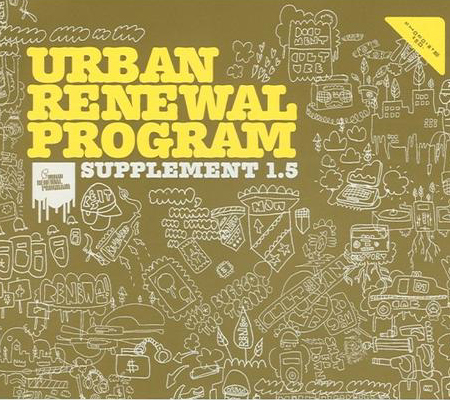 First, Kutmasta Kurt gives “Wylin Out” the Indian sample treatment. Rarely ever has a non-mainstream producer made such an obvious leap for a mainstream invention. Taken out of this context, however, the track works fairly well, despite very standard drum programming. Rappers Diverse and Mos Def aren’t disturbed by the typically ascending and descending sitar playing and singing either, in fact, their loop-like rhythmic rhyme patterns harmonize surprisingly well with the foreign sounds.

But the real surprise is just around the corner, where Aesop Rock revisits his “Train Buffer” track. What first sounds like a cacophony of cold, rhythmic stabs, soon turns into a monster track that resonates with as much attitude as its rapper, who heats up his usual lyrical melting pot of b-boy code, pop culture references and personal experience, in some ways similar to a modern day Chuck D, giving rap back some of the immediacy and intelligence it once possessed.

Next up is another interesting character in contemporary hip-hop, Slug of Atmosphere. Over a dominant bassline, he materializes as the proverbial ‘fear itself’ on the aptly titled “Fear”, trying to shine light on this often obscure threat. Diverse concludes the vocal tracks with “Blindman (Low Budget Mix)”, a short meditation over colorful guitar plucks and sparsely sprinkled drum arrangements.

Rounding off this patchwork EP are two instrumentals. Listening to Caural’s “Photograph” is like watching a bird carefully build a nest from whatever bits and pieces it can find. The track may not be more than another piece of jazzy electronica, but Caural goes out on a limb (pun intended) to create it. The Timeout Drawer composes the final goodbye, “Broad Grins from the Boarding Ramp”, 6 minutes of melancholic musings wrapped up in a retro look.

Having “Urban Renewal Program Supplement 1.5” is certainly worth considering if you liked the original edition. Purchases can also be motivated by specific names in the credits, but except for Aesop’s the individual performances don’t particularly call for it.