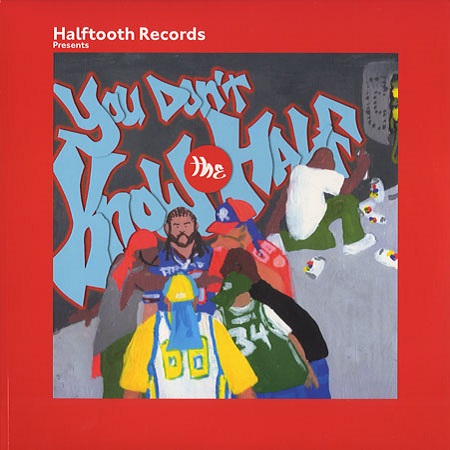 Halftooth Records presents :: You Don’t Know the Half

Normally, compilations are disappointing discs. All of them are released with the same buzzâ€”well-known artists collaborating with A-List producersâ€”but usually end up with similar results. They end up as one-time listens with three or four hot songs, and the rest of the disc consisting of either leftovers from the artists’ best material, or half-done beats by producers just chasing a paycheck. When I received this disc in my biweekly batch of albums to review for RapReviews, I expected similar sentiments. Though this album boasted appearances by J-Live, Little Brother, and Talib Kweli, I had never heard of the rest the names mentioned on the album cover. I hesitantly put the disc in my stereo, expecting the worst. I was pleasantly surprised.

The disc jumps off right with “Quest to Find” featuring J-Live, and Halftooth artists Oddisee and Kenn Starr. Over melodic piano keys and a dramatic backdrop produced by Oddisee himself, all three emcee’s drop more quotables in their own verses than most compilations can boast altogether. Peep some of Kenn Starr’s verse:

“I represent the culture, it’s bigger than rap
I’m an MC, you just another nigga that rap
I’m sick of these cats, that act like they better than Ken
Cuz they got cheddar to spend, I’m not letting ’em win
I handle beef in a trifling fashion
There go ya baby off a balcony, like Michael Jackson
I write wit passion, my one-liners will make ya mind hurt
Leave you stretched out, like a vagina after child birth”

Hearing the verses from Kenn Starr and Oddisee are particularly refreshing; while most compilations have no-name artists drop verses that are mediocre or average at best (see Bad Boy’s Kain and Ruff Ryders’ InfraRed on The Saga Continues and Ryde Or Die Vol. 1-3, respectively), Halftooth’s artists show that they can pull their own weight. Kenn Starr shows his punchline prowess again on “What Up,” and effortlessly rides a smooth beat by relative newcomer Kev Brown (best known for “The Brown Album,” his remix disc to Jay-Z’s “The Black Album”) on the aptly-titled “Walk the Walk,” on which he advises other hip-hop artists to stay true to themselves in their music. Though Oddisee shows lyrical skill on “Yes Y’all” and “Brother,” he really shines behind the boards, producing 13 of the disc’s 18 tracks; actually, all of the tracks mentioned in this reviewâ€”unless noted otherwiseâ€”are tracks constructed by Oddisee. Whether it’s the dope pianos he gives Kaimbr, Cy-Young, and DJ Roddy Rod on “Everyday Campaign,” the surreal laid-back feeling of his “This Is Hip-Hop” track with Kenn Starr, or his two velvety instrumental interludes on the album, Oddisee is a producing extraordinaire that will undoubtedly receive a lot of phone calls upon the release of this disc.

Another great addition to Halftooth Records is Wordsworth. Mostly known for his role on MTV’s defunct “Lyricist Lounge Show,” the underground emcee has made remarkable contributions to Mos Def and Talib Kweli’s Black Star album, A Tribe Called Quest’s classic album “The Love Movement,” and both Lyricist Lounge compilation discs. Though he hasn’t blown up yet, Wordsworth’s contributions to You Don’t Know the Half should help him create a buzz for the June release of his upcoming LP. He comes with impeccable delivery and his trademark science teacher-like voice on the quirky Oddisee-produced “Here We Go Again.” Anyone who writes lyrics can appreciate the wordplay in Words’ last verse, in which he narrates the scattering of a rumor:

“Check how fast word gets around here
to show how gossip disturbs in the town
when it’s heard by a crowd
Cecil said ‘Don, I seen your brother John at the munch
He said ‘What, my brother John’s a punk?’
Then he hung up
Word spread like ‘John is a chump,’
‘John is a huh?,’ ‘John is a drunk?’
‘You said what? John has a lunch?’
‘John is a monk?’ ‘Oh, you said John got the mumps’
‘John is a clutz? Yo, I heard John got cut’
‘John got punched?’ ‘No man, John got jumped
found Don in the trunk; no, wrong, found John in the dump’
Cecil never on John tryna front
But word got back to John, now John got the pump (here we go again)”

Even though underground artists get their shine on this album, the bigger names are step up to the plate as well. J-Live shows that he still defines what it means to be an “emcee’s MC” on the cocky “Who Do You Call,” and Phonte and Big Pooh of Little Brother come hot as usual on “Long Time Comin’ (Makin Moves),” prompting anyone who hasn’t heard their “The Listening” LP to get a hold of it. And as hard as Kenn Starr and Asheru’s verses are on “If,” Talib Kweli steals the show with one of his best-delivered verses to date:

“I’m about to show you what this black power is
it’s the red, black, and green on the wrist
How I live in this cold world
where we bust off the black llamas
Every winter where we lose more sun than black mamas
If hip-hop got seasons, right now is spring
Life winds, everybody sellin’ death, kiss the ring
You know how it go, people change colors like autumn
Kids learn from experience, fuck what the teacher taught em”

Ending with the dope down-the-line title trackâ€”featuring Quartermaine, Kenn Starr, Dash, Oddisee and Wordsworthâ€”and the jazzy “Ish Lab Outro” instrumental (both produced by Ish Lab producer Misha, who also makes a few waves on the disc), it’s evident that this is among the best compilations of the year (and yes, I realize that 2004 just started). There isn’t one weak song on this disc; every beat is dope, and every lyric is beautifully crafted and delivered. If you thought no compilations could live up to the hype, You Don’t Know the Half.